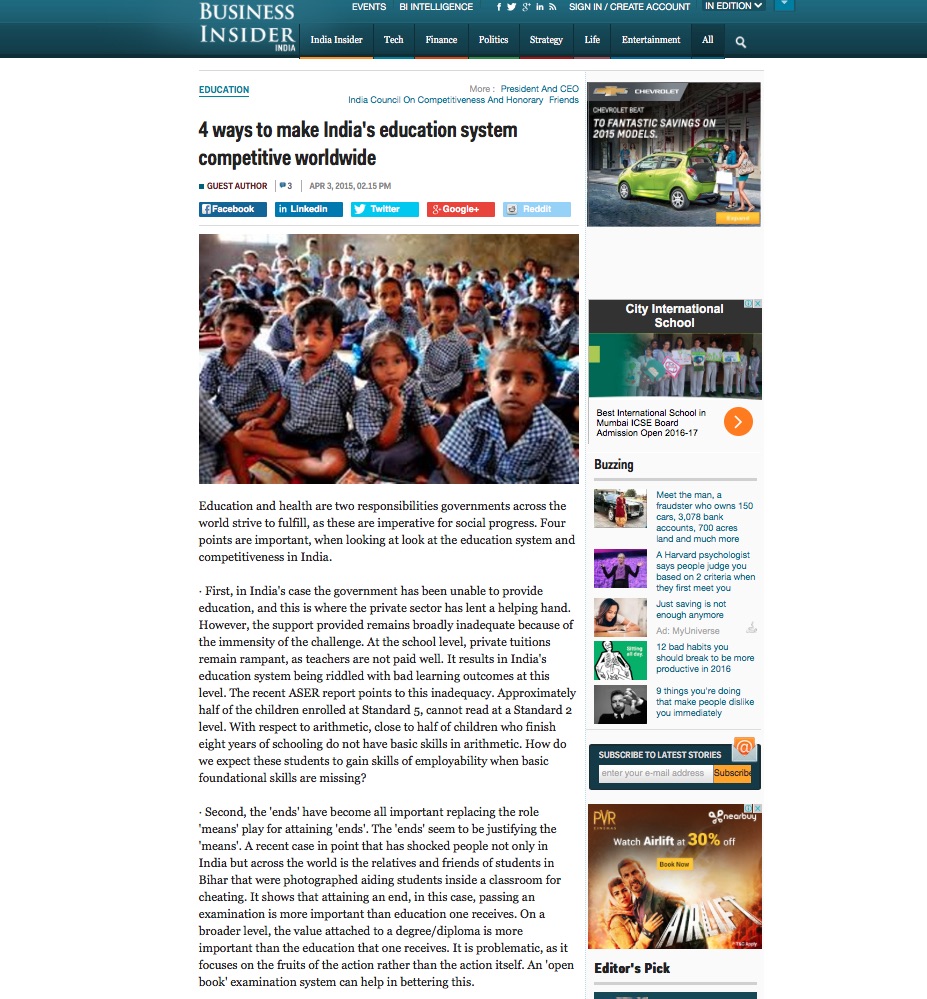 Education and health are two responsibilities governments across the world strive to fulfill, as these are imperative for social progress. Four points are important, when looking at look at the education system and competitiveness in India.

· First, in India’s case the government has been unable to provide education, and this is where the private sector has lent a helping hand. However, the support provided remains broadly inadequate because of the immensity of the challenge. At the school level, private tuitions remain rampant, as teachers are not paid well. It results in India’s education system being riddled with bad learning outcomes at this level. The recent ASER report points to this inadequacy. Approximately half of the children enrolled at Standard 5, cannot read at a Standard 2 level. With respect to arithmetic, close to half of children who finish eight years of schooling do not have basic skills in arithmetic. How do we expect these students to gain skills of employability when basic foundational skills are missing?

· Second, the ‘ends’ have become all important replacing the role ‘means’ play for attaining ‘ends’. The ‘ends’ seem to be justifying the ‘means’. A recent case in point that has shocked people not only in India but across the world is the relatives and friends of students in Bihar that were photographed aiding students inside a classroom for cheating. It shows that attaining an end, in this case, passing an examination is more important than education one receives. On a broader level, the value attached to a degree/diploma is more important than the education that one receives. It is problematic, as it focuses on the fruits of the action rather than the action itself. An ‘open book’ examination system can help in bettering this.

· Third, quite a number of ills that ail our society can be traced back to the moral degradation that we have suffered. In spite of the transparency and moral codes, a number of corruption scandals had rocked the previous government. Under the present government while the wholesale corruption (scams, scandals, etc. by ministers and bureaucracy) is low the corruption at the retail level (paying bribes for evading challans, asking for more money than, is due) broadly remain the same. It has not got to do with the government but us as a people and a society. It calls for a moral scrutiny of us as individuals and as a collective society.

· Fourth, there is a distinct link between what ails us today as a society and the future productive ability and competitiveness of our nation. We cannot become a manufacturing powerhouse or industrial powerhouse with morally corrupt people sitting at the top and running factories. With this broken education system, India will find it extremely difficult to produce managers and leaders of tomorrow. Change has to begin at a family level and to be upright in one’s dealings. Children mirror what parents do.

In the long run, countries that have done well have had a strong value system (of hard work, meritocracy) in addition to other requirements that have made them raise their standards of living. It will be imperative for India, in the long run to focus on means as well as ends for becoming globally competitive. Thus, education and not just degrees should form the basis of what we do.

Published with Business Insider on April 3, 2015.