The competitiveness of India’s insurance sector 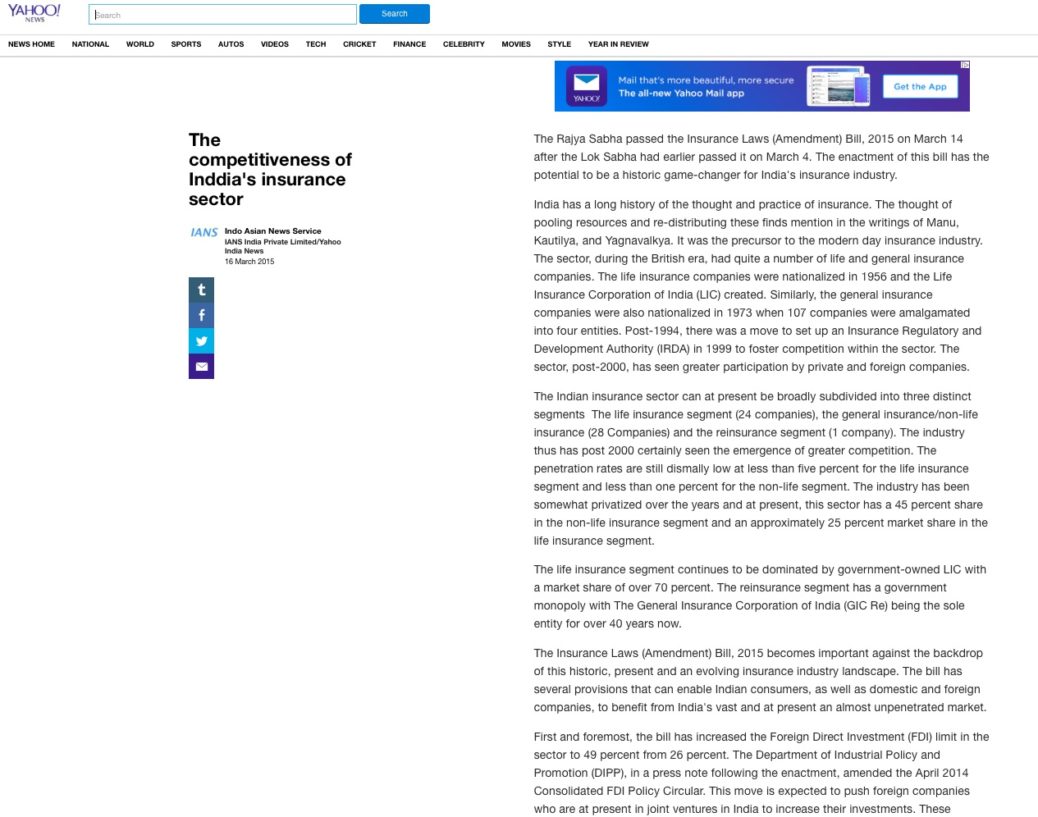 The Rajya Sabha passed the Insurance Laws (Amendment) Bill, 2015 on March 14 after the Lok Sabha had earlier passed it on March 4. The enactment of this bill has the potential to be a historic game-changer for India’s insurance industry.

India has a long history of the thought and practice of insurance. The thought of pooling resources and re-distributing these finds mention in the writings of Manu, Kautilya, and Yagnavalkya. It was the precursor to the modern day insurance industry. The sector, during the British era, had quite a number of life and general insurance companies. The life insurance companies were nationalized in 1956 and the Life Insurance Corporation of India (LIC) created. Similarly, the general insurance companies were also nationalized in 1973 when 107 companies were amalgamated into four entities. Post-1994, there was a move to set up an Insurance Regulatory and Development Authority (IRDA) in 1999 to foster competition within the sector. The sector, post-2000, has seen greater participation by private and foreign companies.

The life insurance segment continues to be dominated by government-owned LIC with a market share of over 70 percent. The reinsurance segment has a government monopoly with The General Insurance Corporation of India (GIC Re) being the sole entity for over 40 years now.

The Insurance Laws (Amendment) Bill, 2015 becomes important against the backdrop of this historic, present and an evolving insurance industry landscape. The bill has several provisions that can enable Indian consumers, as well as domestic and foreign companies, to benefit from India’s vast and at present an almost unpenetrated market.

First and foremost, the bill has increased the Foreign Direct Investment (FDI) limit in the sector to 49 percent from 26 percent. The Department of Industrial Policy and Promotion (DIPP), in a press note following the enactment, amended the April 2014 Consolidated FDI Policy Circular. This move is expected to push foreign companies who are at present in joint ventures in India to increase their investments. These include companies like Nippon Life of Japan, BUPA of Britain and Metlife of the US.

The capital infusion is expected to be close to $2 billion in the near term and $10 billion over the medium to long term. The move will also help in creating jobs that India requires for its ever-increasing workforce. Some consultancies have estimated an additional 15-20 percent jobs in the industry in the coming few years.

Second, the bill also gives IRDA greater powers to frame laws for the sector. Some have compared these powers to be akin to those of capital market regulator Securities and Exchange Board of India (SEBI). The law also gives IRDA powers decide the agency commission structure that is expected to curb the high attrition rates (among agents) that were previously experienced in the sector.

Third, the bill also enables foreign reinsurers to set up branches in India. This segment is expected to deepen with the coming in of global giants like Berkshire Hathaway, Munich Re, Lloyds and Swiss Re. It is also likely to help India develop technical expertise within the domain over the next couple of decades.

The bill is thus all set to benefit the Indian consumers who may witness an increase in choice with the entry of newer players as well as increase in the competitiveness of the sector. It is because both the existing and newer players will enable greater capital infusion into the economy.

According to a recent McKinsey report for CII, the market size of the total insurance sector is currently close to $60 billion. This is expected to quadruple over the next ten years till 2025 to $250 billion. If that happens, it not only means greater capital infusion but also greater insurance penetration among the masses and greater jobs within the sector.