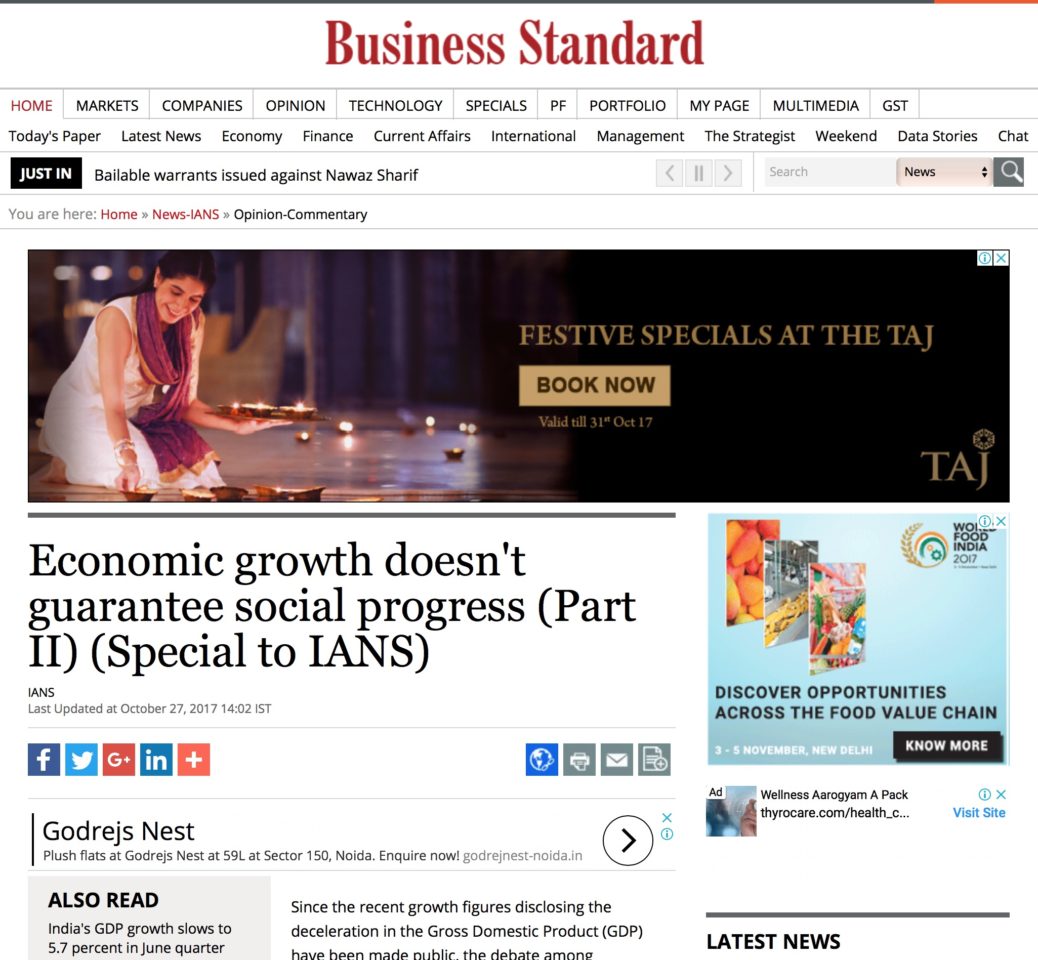 Since the recent growth figures disclosing the deceleration in the Gross Domestic Product (GDP) have been made public, the debate among policymakers and economists in India is revolving around the economic slowdown — garnering unwarranted criticism for the current government as this variability in the growth rate is a regular trend for developing economies.

It is, however, not to argue that the deceleration should not be an area of concern but giving it more attention than what it deserves clearly depicts our obsession with GDP. An economic tool whose purpose was to provide a uniform set of national accounts is serving as a yardstick for comparing regional performance since decades. And therefore, the predominant focus of nations is on maximising economic performance and GDP growth rates. The underlying idea is that economic gains will trickle down to society’s and the people’s welfare.

But this is not always the case. Various regions within India serve as examples that defy the idea that economic growth will eventually lead to social progress of regions. For instance, Delhi, one of the richest areas in India, fails to provide the best quality of life to its citizens. It lags behind in areas of nutrition, environmental quality and personal safety. Delhi has high rates of anaemic children, second only to Haryana among very high-income states; land degradation and water withdrawal levels are among the highest in the country. There are several other social parameters backing this claim.

On the other hand, many states have better social outcomes than their high income counterparts. For instance, Manipur and Mizoram, low and middle-income states, are providing their citizens with standards of living that are comparable with many high-income states. Unlike other low and middle-income states that have the problem of child undernourishment, Mizoram has low rates of underweight and anaemic children. The state’s direct focus on tackling social issues and its consistent efforts towards education and health have helped in delivering these outcomes.

A recent study on Social Progress of Indian states by the Institute for Competitiveness, India, validates this trend. The index is conceived on the notion that if a region fails to provide its citizens with basic needs of survival; protect its environment; and provide opportunity for all to reach their full potential, it is not succeeding.

It thus ranks Indian states based on their capability to provide basic needs of citizens such as shelter, water and sanitation; a foundation for well-being with education, health and communication facilities; analysing the prejudices that prevail in a region prohibiting people from making their personal decisions; evaluating whether citizens have personal rights and freedom or are they susceptible to child labour, human trafficking, corruption and the like.

The Index ranks Kerala as the most socially progressive state. Other states that are placed in the “Very High Social Progress” category are Himachal Pradesh, Tamil Nadu, Uttarakhand, Goa, Mizoram, Sikkim and Punjab. These states that have produced remarkable social and environmental outcomes reveal that there are multiple paths to achieve world-class social progress and economic growth is neither necessary nor sufficient to advance social outcomes.

For instance, Kerala has shown great improvements in social parameters without rapid economic advancement. It has “human development-led” growth which has taken place due to systematic state investments in social sectors like education and health over a long period of time. On the other hand, Tamil Nadu has a balanced development model. The state has not only shown advancement in economic growth over the years but its social indicators have also improved.

The appropriate policies focusing with the right amount of expenditure in priority areas along with strong implementation of the schemes has led Tamil Nadu on this path of inclusive development. Mizoram, amidst all the security issues, has managed to provide its citizens with living standards comparable to those of high-income states, which indicates the strength of its social capital.

Similarly, the inclusion of many high-income states like Andhra Pradesh and Arunachal Pradesh in the tier of “Middle Social Progress” reflects that social progress not only depends on the economic development but also on the use of revenues generated by economic expansion.

This is not to argue that economic and social progress are independent. A strong positive relationship is observed between the two which is significant at the one per cent level. At an aggregate level, a one per cent increase in NSDP (National Skills Development Programme) per capita is associated with a 0.08-point increase in the Social Progress Index score.

The correlation witnessed between the two is mainly because economic growth provides more resources to invest in social issues through private as well as public spending and investment. Despite this relationship, a considerable amount of variability in social progress is observed among states with comparable levels of NSDP per capita. For instance, Chhattisgarh attains a significantly higher level of social progress (56.63) than Jharkhand (47.80) but the NSDP per capita varies by just Rs 509.

Therefore, the focus should not only be on economic growth, which is the means to an end, but also on other factors such as the right mix of government policies; investments in innovative mechanisms; private businesses complementing government sector; and accountable institutions that are critical for improving the quality of life.

The article was published with Business Standard and Millennium Post on October 27, 2017.