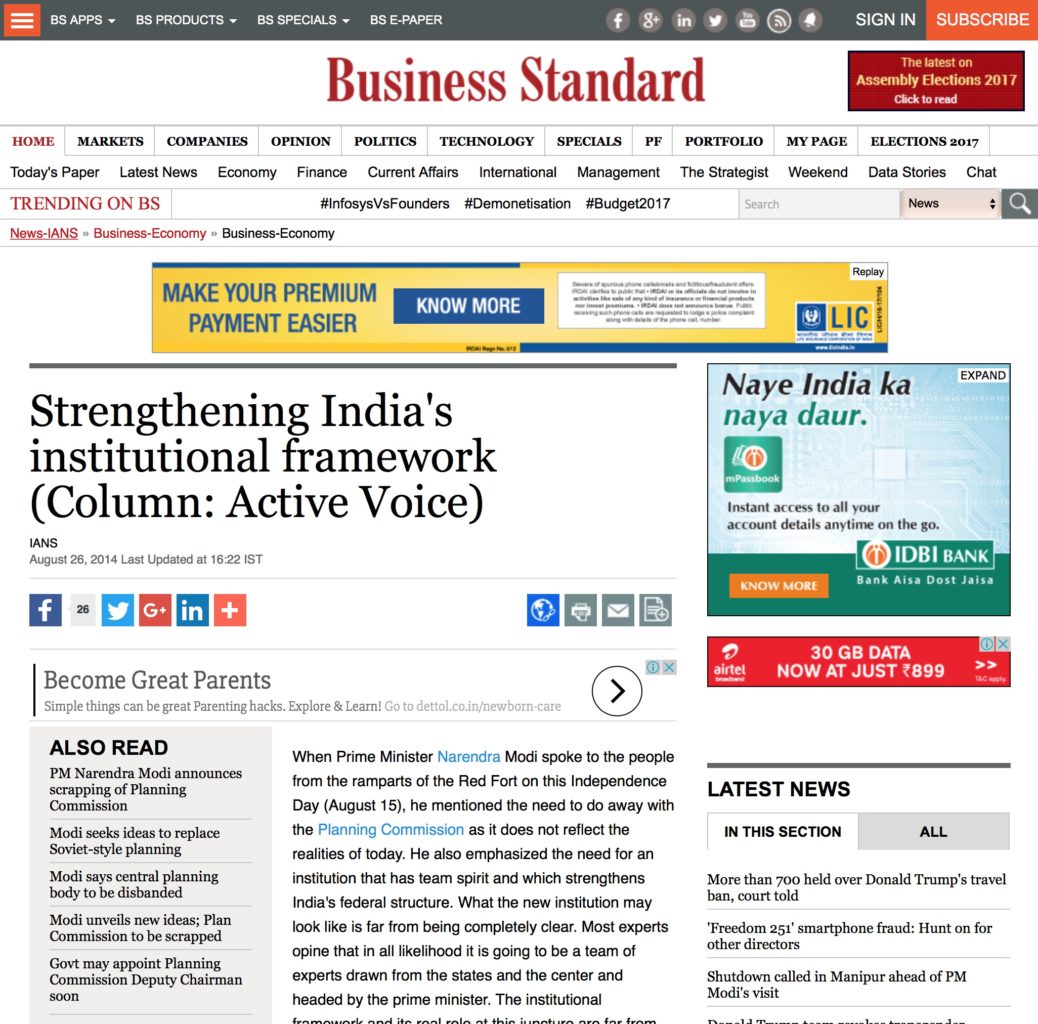 When PM Modi spoke to the people from the ramparts of the Red Fort on this independence day, he mentioned about the need to do away with the Planning Commission as it does not reflect the realities of today. He also emphasized the need to have an institution which has team spirit and which strengthens the federal structure of India. While the new institution may look like, is far from being completely clear. Most experts opine that in all likelihood it is going to be a team of experts drawn from states and the center headed by the PM. The institutional framework and its real role at this juncture are far from clear.

Part 1 of the Constitution of India proclaims India as a Union of States. With the formation of Telangana on March 1, 2014 the total number of states in India now stands at twenty-nine, and the total number of union territories remains unchanged at seven. The importance of states cannot be overemphasized at this critical moment in India’s history with PM Modi at the center, who earlier headed the state government of Gujarat for close to 13 years. What this also points to is the growing influence of states in the federal structure of India. PM Modi is keen to strengthen the role individual states can play in determining their destinies.

At present, there are several very large and very small states in India. The diversity with respect to size especially in economic, linguistic, demographic and area terms is truly staggering. For a union government to understand and make policies taking into account all needs of all states is simply an exercise in vain. This would even go against the principles of decentralization and delegation of authority as envisaged in the seventy-third amendment to the constitution, which calls for greater autonomy to the not the second but the third level of governance. How can  we ensure autonomy to the third level it is missing at the second level?

The PM is well aware of this critical point, and it will be worthwhile if he works with the states in building an atmosphere of trust where states can be made partners in development. Areas where the state could do much good to improve include necessities like food, electricity, access to healthcare, access to banking, access to clean water and affordable housing. While working on these basic realities, the states would also do a greater good in trying to foster investments from corporations which will give a boost to not just local firms, clusters  and industry, but will also provide people with much need employment in that particular state. In time, these people could also set up their  companies that may make these states not only competitive, but also self-reliant and prosperous in the long run.

Cities are the other building block of competitiveness which are often neglected. They are places of increased economic activity and prosperity. Cities, the world over have stood the test of time and are seen harbingers of economic prosperity and growth. They also are representative of identity and civilizational ethos. In India, adequate attention is not given to cities, which lie at the 3rd level of governance. It is in lieu of the fact that municipal finances are in a pathetic state of affairs in India. This has led to several problems like non-availability of necessities like lack of proper sanitation, lack of proper housing and lack of proper infrastructure within the city. Cities when having proper finances have the sufficient wherewithal to absorb the increasing influx of people to urban areas. They also have greater chances of improvement in implementation as political opposition is lesser at the level of cities as compared to the state or at the central government level. In India, the new 100 new smart cities initiative is a step in the right direction but much will depend on not just branding but improvements in finances, infrastructure and governance at this third level. What is required is not just ‘smart’ cities, but enabling cities with proper ‘hard’ and ‘soft’ elements to come together for creating both environmentally livable and economic viable cities. The focus will have to move away from either human elements or economy or environment and will have to incorporate elements of all the three else the point of 100 ‘smart’ cities is just an eyewash.

One sincerely hopes that a focus truly on the second and third tiers of government and more importantly governance will do greater good not only to the Institutional framework of India but will also empower people to practice participative governance that forms the basis of India’s democracy.

Published with Business Standard on August 26, 2014.