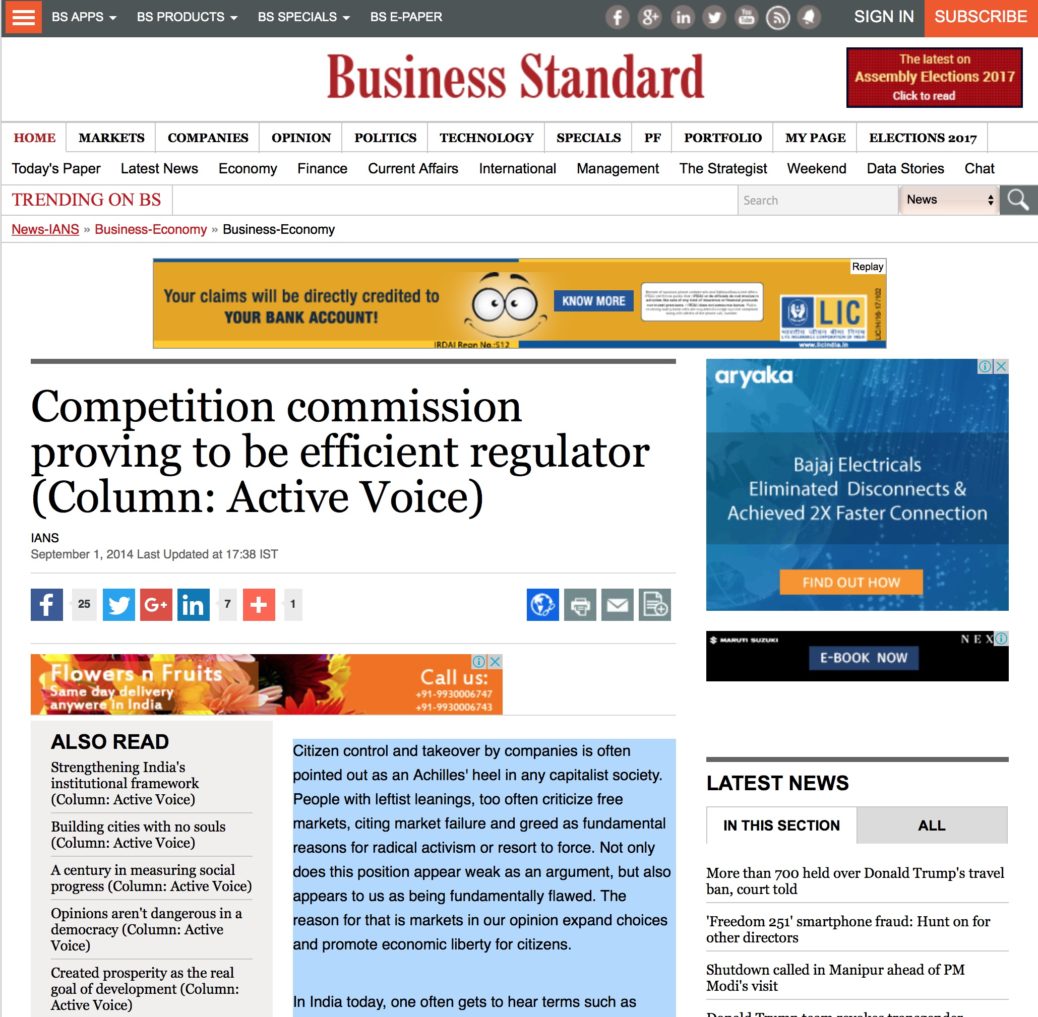 Citizen control and takeover by companies is often pointed out as an Achilles’ heel in any capitalist society. People with leftist leanings, too often criticize free markets, citing market failure and greed as fundamental reasons for radical activism or resort to force. Not only does this position appear weak as an argument, but also appears to us as being fundamentally flawed. The reason for that is markets in our opinion expand choices and promote economic liberty for citizens.

In India today, one often gets to hear terms such as ‘crony capitalism.’ While it is fair to criticize and blame particular companies when they go wrong it is not fair to wage war against the idea of a company as an institution in specific. Companies in general have far too many benefits that outweigh their costs. Companies produce most of the goods and services in any modern economy. For example, most things that we need on a daily basis from our mobile phones to computers or even basic things like clothes, etc. are provided by companies. The solution for India in our belief is not to go to streets and hold democracy sabotage, when we find cases of corruption, or ‘crony capitalism’ but to create, strengthen and then sustain institutions, which work to ensure that the rule of law prevails in India.

Since the liberalization in 1991, the common man has seen an expansion of choices in India. Be it with respect to the choices of buying one’s dream house, or a car one desires or even the medicines one has access to. Back then we had very few organized builders, a handful of cars to choose from and a much smaller pharmaceutical industry. Over the years we have seen a proliferation of choices in all these and many more areas of life, which industries cater to. Often the most severe critics of free market capitalism forget the role that efficient regulation can play in protecting and sustaining a free market ecosystem. A free market system with appropriate regulation incentivizes desirable behavior and penalizes undesirable one.

Competition Commission of India (CCI) is one such regulator, which looks to eliminate practices having adverse effect on competition, promoting and sustaining competition, protecting the interests of consumers and ensuring freedom of trade in the markets of India. The Commission was established in 2003 after the passing of the Competition Act in 2002. It was in the news recently for three specific cases. These cases were pertaining to three different industries namely real estate, automotive and pharmaceuticals.

The first case was of that of DLF (India’s largest real estate company) using its monopoly “unfair and discriminatory” terms on its buyers through apartment buyers’ agreements. The case arose in 2010 when the flat buyers’ association approached the CCI alleging delays and construction of additional floors in DLF’s Park Place and Belaire developments in Gurgaon. Subsequently, in 2011, CCI found DLF abusing its market dominant position. The Commission had imposed a penalty of Rs.630 crores and asked DLF to change the apartment buyers’ agreement. The order was challenged by DLF in the Competition Appellate Tribunal (COMPAT), which dismissed the plea of DLF. The case was then later challenged in the Supreme Court, who has directed DLF to deposit Rs.630 crore in this matter.

The second case was that of fourteen automotive manufacturers in India who have been fined Rs.2,554 crore for failing to sell spare parts in the open market. This essentially is violating competition law by allowing monopolistic control over spare parts enabling these companies to charge arbitrarily. Seventeen car companies were probed, and fourteen were found to engage in this practice of not selling spare parts in the open market. Tata Motors in this case has been fined the highest, with a Rs.1,346.46 crore penalty.

The third case pertains to the pharmaceutical industry in India where CCI has for the first time gone for public scrutiny of the merger of Sun Pharmaceutical Industries Ltd and Ranbaxy Laboratories Ltd. The deal is under the scanner as it could harm India’s ‘national interest.’ It would most likely lead to significant market domination by the combined entity. The deal may cause prices of essential life-saving drugs to rise due to monopolization. CCI had issued a show cause notice in July to the companies concerned as to why there should not be a public investigation of the merger?

What do these cases mean for the common man and companies? Does this show crony capitalism or efficient regulation? The answer to the first question in our belief is that though many people may not directly understand these cases the impacts of these will surely be felt by common people. It would enable him to face a far fairer system as compared to the one that would have been present in the absence of India’s antitrust regulator. For the companies, these cases increasing show them that the interests of the consumers and India’s national interest will be taken into account by CCI and producers will have to comply with the competition law of the country. In our opinion more than displaying crony capitalism these cases display efficient regulation. Overall these cases remind us that our efficient and effective public institutions can repose confidence, trust and faith in our ideals that are so very essential for not only our economy but also for our democracy to function well.

Published with Business Standard on September 1, 2014.