Family planning: The next step 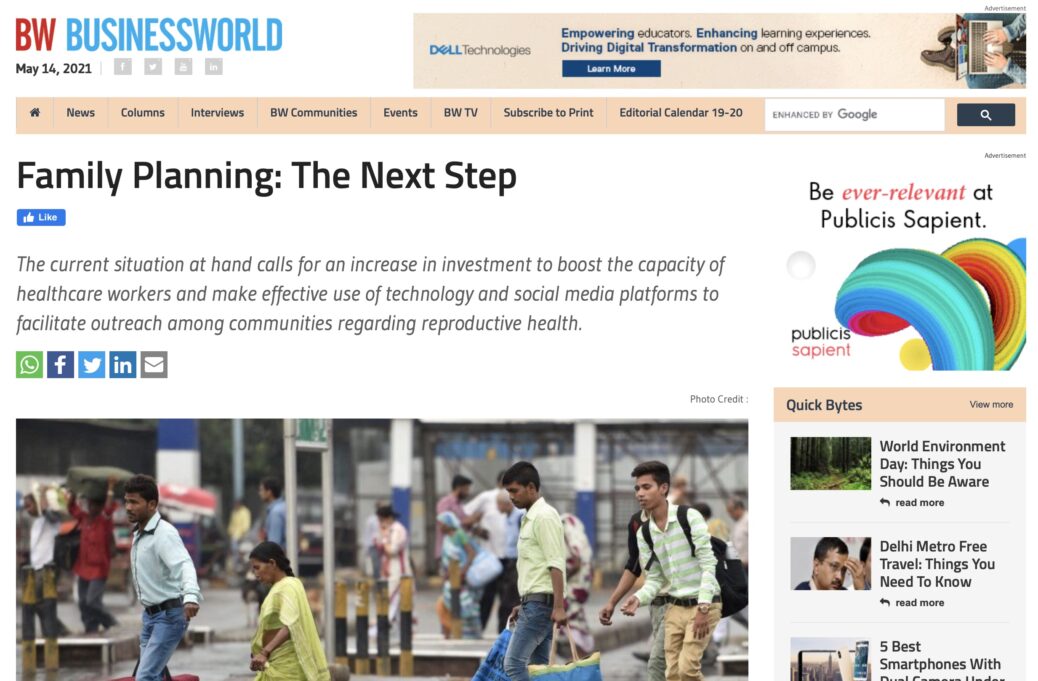 Family planning: The next step

The world, including India, has made huge strides in developmental progress over the last few decades. One such notable milestone has been the popularization of the practice of family planning, which marked a revolutionary change- giving women a choice regarding when and whether to have children. Public outreach programmes to raise awareness about family planning along with the expansion of availability of modern contraceptives were instrumental in achieving this milestone.

The benefits of this development extend beyond its immediate impact. Besides advancing human rights, it has allowed women to pursue interests and aspirations outside their conventional gender roles, which has had long-run benefits for the overall economy in the form of increase in educational attainment, labour supply improvements and income growth. Furthermore, planned pregnancies and birth spacing have resulted in reduced malnutrition, and lower maternal and child mortality rates.

The most apparent benefit of family planning has been the reduction in global fertility rates and population growth rates. The data figures for India speak of the transformational change the country has underwent in this regard. Between 1971-81 and in 2001-11, population growth rate fell from 24.7 percent to 17.7 percent. According to the Sample Registration System (SRS) Statistical Report released by Census in 2018, India’s Total Fertility Rate (TFR) reduced to 2.2 against 2.4 in 2018, which is further bound to fall below 2.1, the minimum replacement level needed for the number of children to replace their parents.

Having achieved significant gains in addressing its family planning needs, the next challenge for India is to turn attention towards regions and population sub-groups that have lagged considerably in comparison to the rest of the country. The recent National Family Health Survey-5 (NFHS-5) data, released for 22 States and Union Territories, shows that 19 of them achieved TFR below 2.1, but there are a few gaps in outcomes. For instance, the unmet need for contraceptives among married women aged 15-49 remained constant in Andhra Pradesh and even increased in Meghalaya, while it fell for the rest of the states. The increasing trend in Meghalaya could be attributed to the rising social and political instability in the region that may be obstructing ongoing developmental programmes.

Another gap that demands our attention is the high unmet need for contraceptives among later adolescents (aged 15-19 years). The NFHS-4 data reveals that the unmet need among currently married women aged 15-49 was 12.9 percent, whereas the figure was 19.4 percent for later adolescents in 2015-16. Similarly, unmet need for spacing was at 5.7 percent for the 15-49 age group, but 17.6 percent for adolescents. The resulting outcome is high incidence of teenage pregnancy, which then adversely impacts school attendance and labour force participation of adolescent girls. This necessitates more targeted approaches towards addressing unmet needs.

The pandemic has further exacerbated these issues. Access to reproductive health services, and thus, access to contraceptives have become limited as the healthcare sector has diverted resources towards dealing with COVID-19 cases. This requires corrective action, including an improvement in awareness about family planning.

It cannot be denied that India has come a long way owing to the efforts of the government and civil society. Nevertheless, the current situation at hand calls for an increase in investment to boost the capacity of healthcare workers and make effective use of technology and social media platforms to facilitate outreach among communities regarding reproductive health. The progress made over the last decades need to be carried forward, and to that end, India needs to keep an eye on outcomes current trends and address the leftover gaps.

The article was published with Business World on May 14, 2021.