How India can keep its airlines afloat 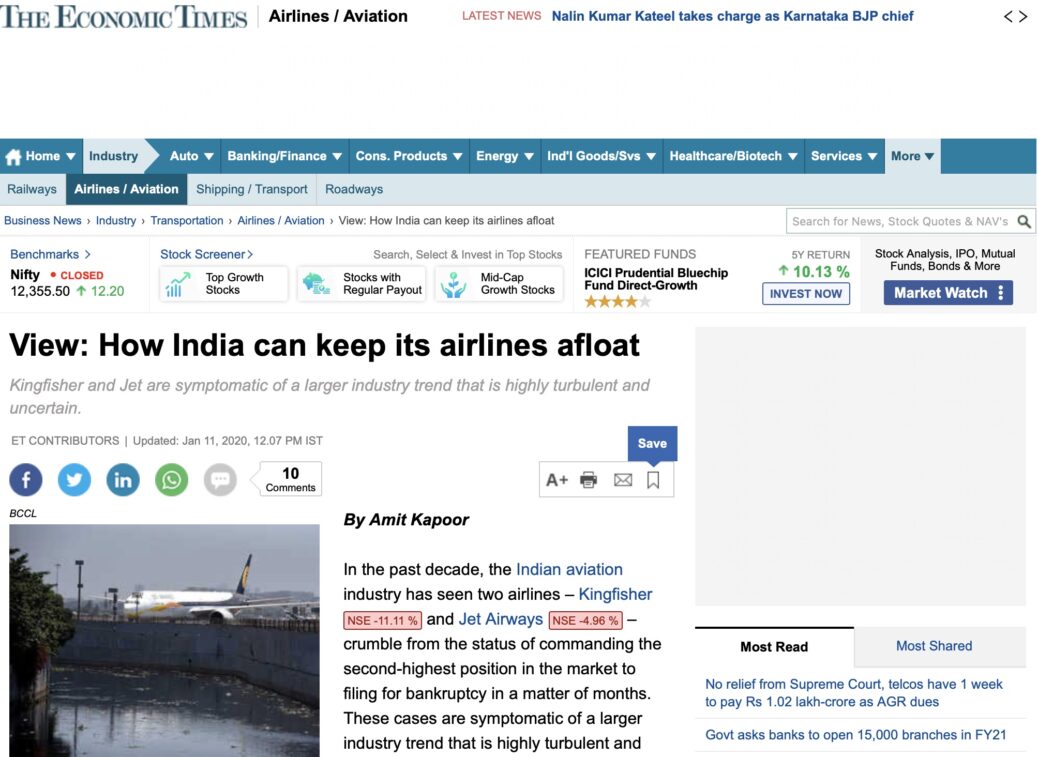 How India can keep its airlines afloat

In the past decade, the Indian aviation industry has seen two airlines – Kingfisher and Jet Airways – crumble from the status of commanding the second-highest position in the market to filing for bankruptcy in a matter of months. These cases are symptomatic of a larger industry trend that is highly turbulent and uncertain. The combined operating profits of all scheduled Indian carriers turned red in 2018-19 for the first time since 2015-16. The situation seems bleak for the current financial year as well, with oil prices poised to rise further due to adverse global conditions and a few airlines continuing to suffer from the grounding of the Boeing 737 Max.

The poor industry performance seems surprising considering the fact that the domestic demand for air travel in India is witnessing a healthy growth. The domestic passenger air traffic grew by 13.8 percent in 2018-19 and 18.8 percent a year before that. As a result, the sector is undergoing an impressive traffic growth and high capacity utilisation levels. Therefore, demand for air travel is not the problem ailing the industry, unlike the global aviation market, which is facing issues of slowing demand. The lack of profit margins in the face of booming demand and a stark contrast with global trends makes the Indian aviation market an interesting case study.

There are a couple of template reasons that are given for the peculiar performance of the Indian aviation industry. The first usual suspect is aviation fuel, which accounts for a third of the overall costs of airline operations.  Given the volatility of global crude oil prices, operational costs are quite unpredictable. This uncertainty combined with a weak rupee serves a significant dent into the profitability of airlines. The second common argument that is put forward to explain the performance of the Indian aviation industry is that airlines all over the world are loss-making, and India is no exception. But putting the fragility of the sector beyond the control of domestic stakeholders ignores the strategic issues within which arise out of government intervention and poor strategic choices on the part of the private players. First, while jet fuel prices are uncertain, they are also taxed at the highest level than anywhere in the world by a margin of 35 to 40 percent. Since India is a price-sensitive market, a reduction in taxes could improve its revenues through a lowering of fuel prices.

The second problem with government action has been the arbitrary nature of its decision-making process. For instance, Jet Airways, which is partially owned by Abu Dhabi-based Etihad, benefited immensely from the government’s controversial decision to multiply the number of seats permitted airports in India and passenger-heavy Gulf hubs of Dubai and Abu Dhabi. On the other hand, Kingfisher was even denied permission to stop and re-fuel its flights in the Gulf, which would have helped slash its fuel bills. The unpredictability in regulation has been problematic for the sector.

Meanwhile, an issue that stems from within the private sector lies with its pricing strategy. Competitive air ticket pricing is a significant stimulator of demand in the Indian aviation industry. But airlines lose a significant amount of money in the process since airlines end up selling a majority of the seats at the lower price points; fares that are not only lower than the average fare on that route but also lower than the cost. Such a pricing strategy leads to a squeeze in the revenue of airlines.

Other factors – few of them avoidable – have led to a rise in the cost per available seat per kilometre (CASK) for most airlines in the recent past. Indigo and GoAir had to replace the faulty engines of their A320 neo engines that accounted for a majority of their fleet. SpiceJet had to ground its MAX planes after they were globally barred from flying since the two deadly crashes involving the aircraft. Vistara inducted a few of its Jet’s Boeing 737 planes after the airline was grounded in a move to expand its fleet but ended up maintaining two different fleets operated by two different sets of crews and maintained by two different maintenance teams.

The Indian airline industry has a host of problems that span across the sector including the government and the private players themselves. The latter need to be more strategic in their operations and draw lessons from airlines that have managed to remain profitable around the world. Southwest, for instance, has been a case study on how it used its short-haul and point-to-point strategy to achieve the lowest operating cost within its domestic market. However, the government also needs to play its part through easing up on its taxes and bringing in more certainty in its regulatory practices. The industry holds a lot of promise and favourable conditions for growth. But just like the rest of the economy a combination of poor strategic choices by the private sector and government intervention are proving fatal for its survival.

The article was published with Economic Times on January 11, 2020.