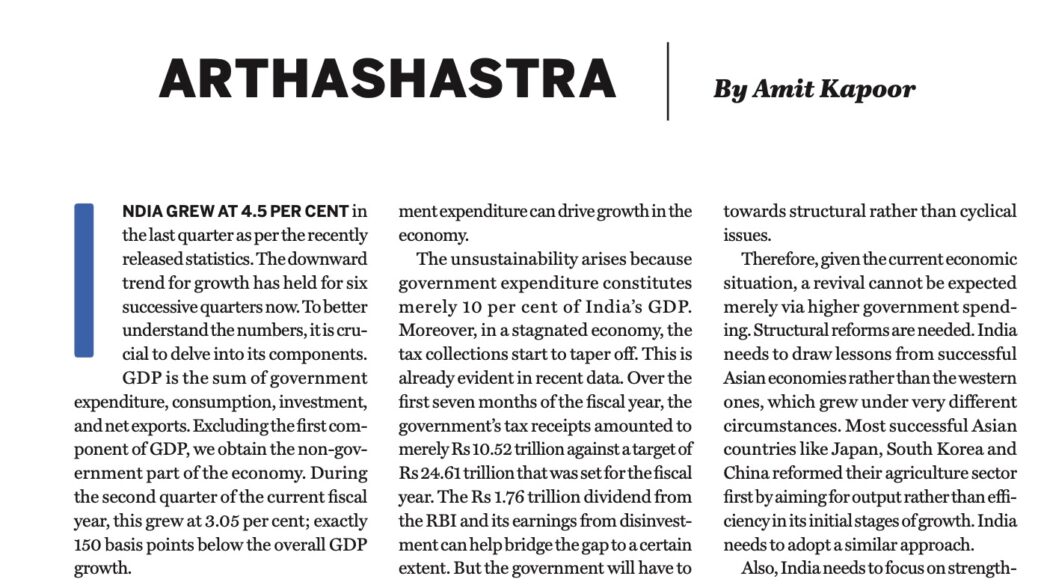 India grew at 4.5 percent in the last quarter as per the recently released statistics. The downward trend for growth has held for six successive quarters now. To better understand the numbers, it is crucial to delve into its components. GDP is the sum of government expenditure, consumption, investment, and net exports. Excluding the first component of GDP, we obtain the non-government part of the economy. During the second quarter of the current fiscal year, this grew at 3.05 percent; exactly 150 basis points below the overall GDP growth.

The below-par performance of the non-government part of the GDP is due to falling investment, muted consumption, and subdued exports. Investment growth dropped to 1 percent in the last quarter, which has been the trend for over a year. Although consumption did rise in the last quarter, sales of all consumer products from cars to toothpaste has fallen. The latest export numbers also show degrowth by 1.1 percent in October. Thus, the only driver of growth is the government expenditure. It grew by 15.64 percent in the last quarter alone, and this has consistently been the case in India over the past few years. This makes India’s growth unsustainable in the long run as there is a limit to which the government expenditure can drive growth in the economy.

The unsustainability arises because government expenditure constitutes merely 10 percent of India’s GDP. Moreover, in a stagnated economy, the tax collections start to taper off. This is already evident in recent data. Over the first seven months of the fiscal year, the government’s tax receipts amounted to merely Rs 10.52 trillion against a target of Rs 24.61 trillion that was set for the fiscal year. The Rs 1.76 trillion dividend from the RBI and its earnings from disinvestment can help bridge the gap to a certain extent. But the government will have to eventually move beyond fiscal stimulus for stimulating growth and address the issues resulting in the slowdown.

In order to do so, it is important to understand the fundamental causes of the slowdown and that it is not cyclical in nature. India’s growth has always been consumption-led, as evidenced by weak exports and consistent double-digit imports. Currently, around 60 percent of the country’s GDP is determined by consumption. And this primary component of the economy has dropped from double digits in the second quarter of last fiscal to  5.1 percent in the same period in this fiscal. Thus, the numbers point towards structural rather than cyclical issues.

Therefore, given the current economic situation, a revival cannot be expected merely via higher government spending. Structural reforms are needed. India needs to draw lessons from successful Asian economies rather than the western ones, which grew under very different circumstances. Most successful Asian countries like  Japan, South Korea and China reformed their agriculture sector first by aiming for output rather than efficiency in its initial stages of growth. India needs to adopt a similar approach.

Also, India needs to focus on strengthening its human capital through investments in health and education, just like China attempted in the 1980s. This would go a long way in deciding the country’s manufacturing strength. It is detrimental for India’s long-run growth if it keeps on losing out on low-skill manufacturing to countries like Bangladesh and Vietnam. If these issues are left unaddressed, the elongated slowdown can quickly turn into a premature “middle-income trap” where countries like Brazil, Thailand, and Malaysia currently find themselves. Therefore, the next few years would decide India’s place in the world for decades to come.