Antifragile Ecosystem: A road to sustainable export growth for India 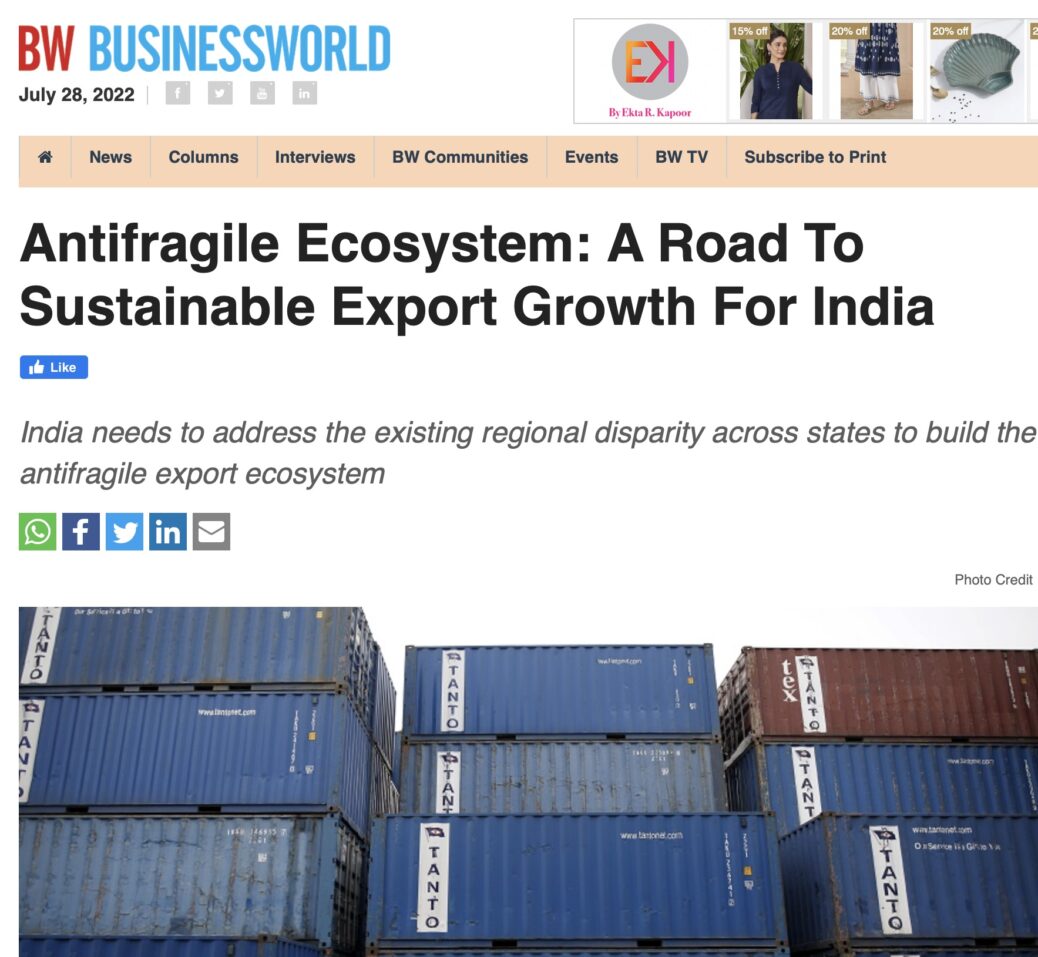 The COVID-19 Pandemic and other global events of significance, such as the Suez canal blockage and Semiconductor shortage, halted trade worldwide. The randomness of these global events has allowed us to rethink our existing economic systems, which are more volatile than ever due to global value chain interlinkages.

Despite the unprecedented disruption in international trade, India’s export ecosystem has shown resilience; its exports stood at $670 billion, out of which merchandise exports exceeded the target of $400 billion. Our systems continue to be more volatile, and thriving through and within crises would require the country’s ecosystem to be antifragile. The concept was first described in the book Antifragile: Things That Gain from Disorder by Nassim Nicholas Taleb. In Taleb’s words, “Antifragility is beyond resilience or robustness. The resilient resists shocks and stays the same; the antifragile gets better.” This term becomes exceedingly important as the road to global trade recovery is not easy with the advent of recent geopolitical tensions between Russia and Ukraine and its economic consequences on the global economy. India should focus on building the antifragile export ecosystem at the sub-national level for a sustainable export growth trajectory. Therefore it becomes vital to understand the overall picture of individual states’ by identifying drivers, bottlenecks, and intra-state disparities within the country’s export ecosystem.

India needs to address the existing regional disparity across states to build the antifragile export ecosystem. There is Regional Disparity as coastal states continue to be the flag bearer of the export sector growth in India. This is reflected in their share of exports in India. In 2021-22, Gujarat (30.06), Maharashtra(17.33), Tamil Nadu (8.34), and Karnataka (6.14) accounted together for over 61 % of India’s exports. Since India aims to double its merchandise and service exports to over USD 1 trillion under the New Foreign Trade Policy by 2030, it would be crucial for other state’s share in exports to increase.

To achieve this ambitious target, States must do more to support a conducive business environment and export ecosystem for exporters, especially in hilly terrain regions which struggle to uplift their export potential even after sharing borders with neighbouring countries. This is because even though states have rightly identified specific export promotion policy measures and district export action plans, they are also required to build the necessary infrastructure to implement the vision equally. Most states, except those in coastal regions, struggle to enable their export infrastructure as transport connectivity and essential trade support continues to be a significant bottleneck in expanding their export footprint. Moreover, they lag in creating Special Economic Zones (SEZs), Agri Export Zones and Export promotion industrial parks despite having a valid export promotion policy. And finally, to improve the state’s export footprint globally and, in turn, further influence the country’s overall export performance, states must focus on the export basket’s diversification by improving market penetration in existing markets and introducing new goods and services in the export basket mix to new destinations.

To address these concerns, States must work closely with the central government, export organizations, firms, and exporters to formulate a roadmap based on their geographical constraints and a diverse export basket where the region has a static and dynamic comparative advantage. Overall, learning for states is to adopt a slightly multifaceted export growth strategy to become Antifragile to thrive in a crisis-like situation that the future may pose. It would be critical for states to focus on enhancing domestic firms’ innovation and manufacturing capacity and existing export infrastructure, and trade support to exporters.

The article was published with Business World on June 29, 2022.