India and the SDG’s 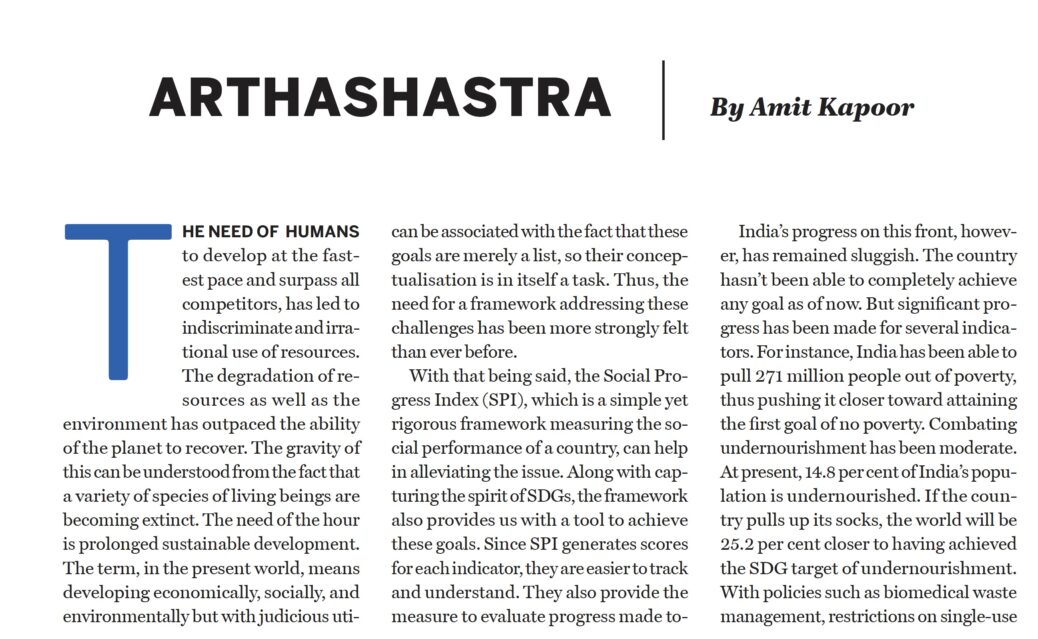 The need of humans to develop at the fastest pace and surpass all its competitors, has led to indiscriminate and irrational use of resources. The degradation of resources as well as environment has outpaced the ability of planet to recover. The gravity of this can be understood from the fact that a variety of species of living beings are becoming extinct. The need of the hour is prolonged sustainable development. The term, in the present world, means developing economically, socially, and environmentally but with judicious utilization of available resources without them getting depleted.

In the light of these facts, the United Nations (UN) in collaboration with the leaders of the world, launched 17 Sustainable Development Goals (SDGs) in 2015. They comprise of 169 targets, to be achieved by 2030. These ambitious SDGs aim at the holistic development of all the countries of the world with a focus on five P’s – people, planet, prosperity, partnership, and peace.

However, the extensive nature of the parameters of SDGs often poses a threat to their successful actualization. Shockingly, only one-third of the 230 indicators of SDGs can be captured. The reason can be associated to the fact that these goals are merely a list, so their conceptualization is in itself a task. Thus, the need for a framework addressing these challenges has been strongly felt than ever before.

With that being said, the Social Progress Index (SPI), which is a simple yet rigorous framework measuring the social performance of a country can help in alleviating the issue. Along with capturing the spirit of SDGs, the framework also provides us with a tool to achieve these goals. Since SPI generates scores for each indicator, they are easier to track and understand. They also provide the measure to evaluate progress made towards achieving these SDGs and also indicate the areas needing immediate attention.

The scores of the sixth edition of SPI (2019) came as a bolt from the blue. The achievement of the target by 2030 seems to be quite far from reality. The index has raised concerns that fulfilment of SDGs at the current rate is not possible until 2073. However, this claim can be countered if India and China effectuate the goals rapidly. Both the countries have a monumental role to play in formulating the SDGs because of their vast population base.

India’s progress on this front, however, has remained sluggish. The country hasn’t been able to completely achieve any goal as of now. But significant progress has been made for several indicators. For instance, India has been able to pull 271 million people out of poverty, thus pushing it closer in attaining the first goal of no poverty. Combating undernourishment has been moderate. At present, 14.8% of India’s population is undernourished. If the country pulls up its socks, the world will be 25.2% closer to having achieved the SDG target of undernourishment. With policies such as biomedical waste management, restrictions on single-use plastics, etc., the country is focussing on fulfilling the goal of climate action. Thus, the onus of driving the world towards sustainable development lies on India’s shoulders.

The UN’s first-of-its-kind summit on SDG to be held on 24 and 25 September will help in determining the present scenario of SDGs. The event will comprehensively evaluate the plausibility of implementation of the 2030 agenda. An in-depth analysis of SDG’s using tools like SPI could provide the required insights and will help in aiding a plan to make SDGs a tangible reality.

The article was published with Business World dated September 28 to October 11, 2019.