The Irrationality of Belief 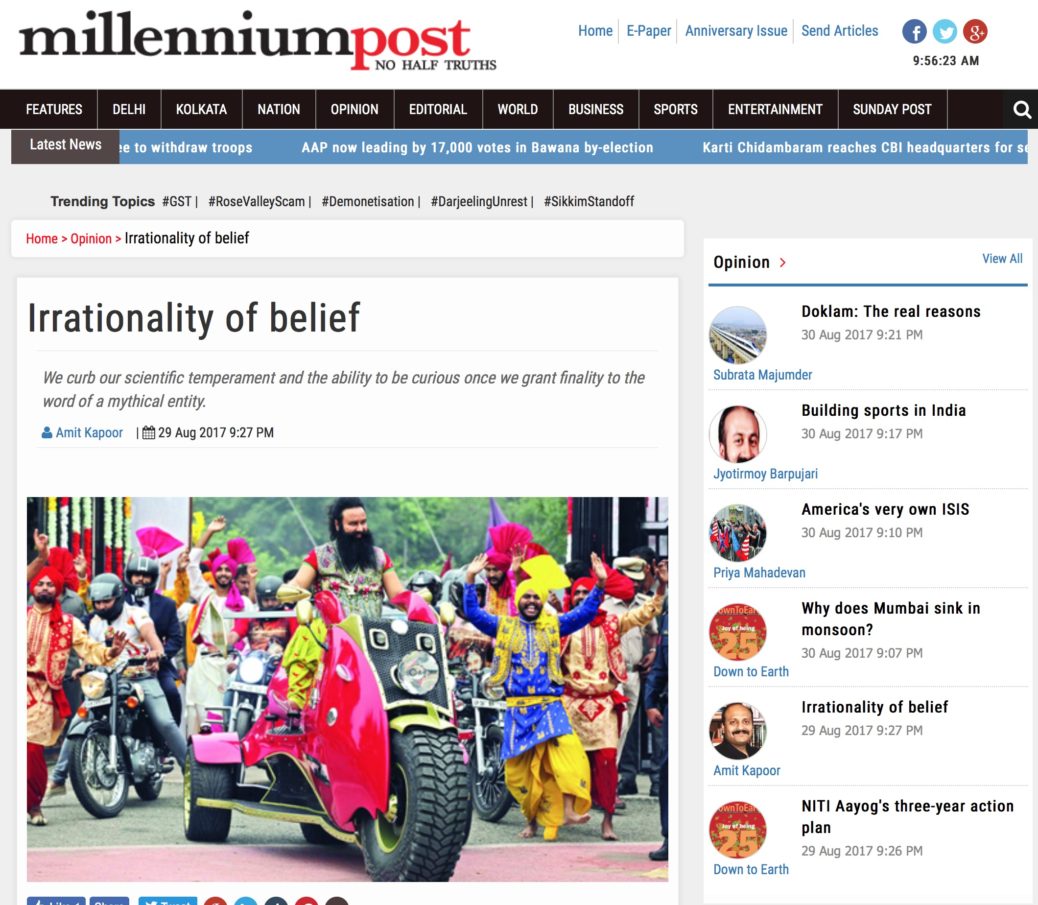 Self-proclaimed godmen and a coterie of sycophants to back them and validate their claims have always been ubiquitous in India. This phenomenon is not problematic in itself until the sycophancy is followed to the point of absurdity as seen in the series of events in the wake of the brave court verdict last week against the Dera Sacha Sauda head, Gurmeet Ram Rahim Singh.

The followers of a man who was adjudged a rapist after thorough legal proceedings that were carried on for 15 years and took more than 200 court sittings, held the country hostage with shameless acts of violence and arson.

The most astounding fact is that these miscreants were mostly well-educated, wealthy and socially prominent. So, these blatant acts of intimidation were not executed by a simple-minded, gullible populace. This begs the question as to how rational individuals succumb to such ghastly irrationality. Was their overzealous reaction to the verdict truly irrational?

Dera Sacha Sauda has over 40 centres spread around India which is served by its 60 million-odd followers, as it claims. Even if the latter number is exaggerated, the following is not insignificant and a threat to their operations by the arrest of their leader puts many livelihoods at risk. People serving at these centres and making a living out of them will be affected by the verdict. A lot of followers also benefit from the group’s social welfare campaigns. Although this does not explain a violent reaction, it puts rationality into their seemingly irrational acts.

On the political side, Dera Sacha Sauda followers account for a huge vote bank. Ram Rahim has always publicly backed political leaders and has been a determinant factor in electoral outcomes time and again. His political heft allowed him to gain the highest level of security cover that the country has to offer. Therefore, cracking down on his followers does not make much political sense.

But more importantly, there is the larger issue of a rigid belief system at play that has been established since time immemorial, which frowns upon any kind of questioning. For Dera Sacha Sauda followers, the establishment of their sect has been quite recent — only dating back to 1948. It is not a religious ideology in itself since it merely encourages selfless service by people from all religious faiths. However, the problem of an absolute lack of logic, reason and a scientific curiosity to question is the same as any other religious ideology. Therein lies the root of conflict in the likely scenario of some entity, like the state, questioning their spiritual leader’s fallibility.

The Vedic system of thought never penalised questioning of an ideology and was quite flexible to interpretation and practice. It never formulated the idea of a physical God, but propagated the supremacy of the five elements that could explain creation. The land of the time was so open to ideas that it allowed the existence of the Carvaka philosophy of materialism that rejected supernaturalism and held perception, empiricism and conditional inference as proper sources of knowledge. Therefore, it rejected the idea of a God or a soul since they could not be perceived.

Such philosophies flourished because religion allowed itself to be subjected to questioning. That ended once the finality of the God’s word was declared by prophets claiming to be carrying it. Soon after, the environment of questioning witnessed an abrupt demise. The prophet’s words were final and undebatable. In such a case, the entity questioning it is the enemy; the one calling him a rapist is just blasphemous. This has made us akin to having animalistic tendencies where belief in one’s ideology is supreme and the one opposing it is worthy of attack; in last week’s case, it was the state. Can religion not be called regressive in such a scenario?

We’ve virtually curbed our scientific temperament and ability to be curious once we made the word of a mythical entity final and supreme. The land of Carvaka became a land where rapists, murders and abductors are worshipped and fought over. An ideology that stands on no logical grounds but blind faith is our real-life Pied Piper. It is leading us into a void into which we’re mindlessly dancing. Inculcating an environment of questioning and not getting offended at others who do so is the key to tune out of that music.

As long as India does not accept the threat that it is posing to itself with a growing rigidity in religious beliefs, any kind of development will be hollow and at the mercy of a “Messenger of God”.

The article was published with Business Standard and Millennium Post on August 29, 2017.