The year gone by and what the future holds 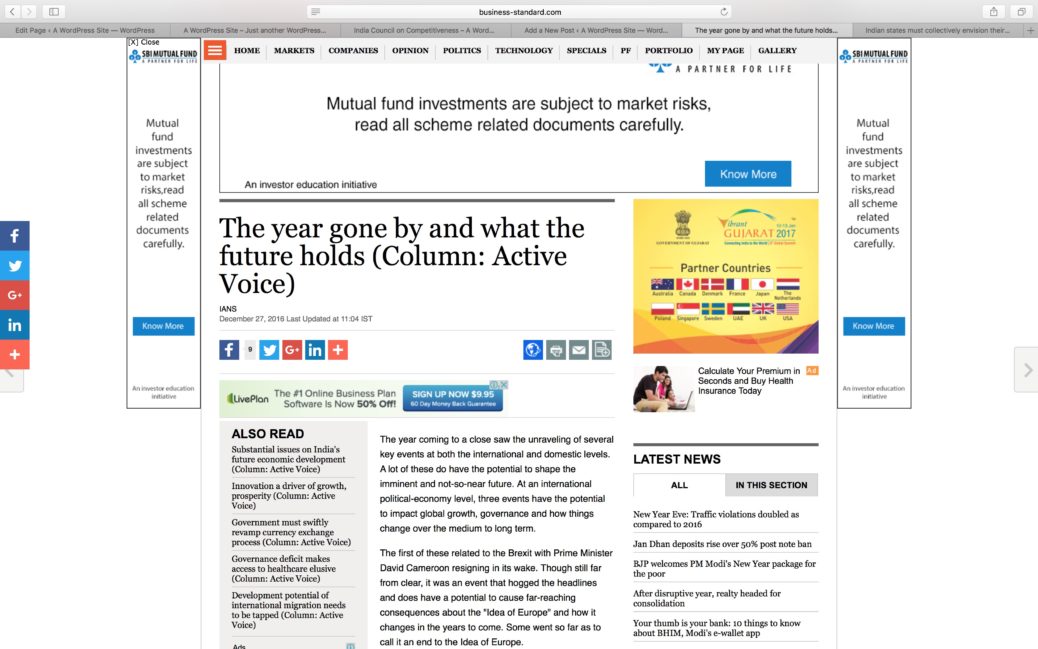 The first of these related to the Brexit with Prime Minister David Cameroon resigning in its wake. Though still far from clear, it was an event that hogged the headlines and does have a potential to cause far-reaching consequences about the “Idea of Europe” and how it changes in the years to come. Some went so far as to call it an end to the Idea of Europe.

Another major event was the election of Donald Trump, the Republican nominee who most media outlets had forecast would lose in the run-up to the US election. The win does pose uncertainty in the years ahead as Trump has little experience of the politics and governance of an economy as vast and complex as the US. Besides this, his foreign policy and attitude to trade will have a significant bearing on global competitiveness and growth, especially as international trade continues to falter.

The third important event was the signing of the OPEC deal and, post this, the deal to curb production by non-OPEC oil producing countries, including Russia, all of which could limit global production and cause increases in the price of oil. The ensuing price rise due to production cuts does have the potential to be seen as a major concern in emerging oil-consuming markets like India, which imports roughly 80 percent of its crude oil needs.

Other events globally which made headlines in 2016 were the impeachment of Brazilian President Dilma Rousseff for tweaking government figures and the ongoing storm over the Petrobras scandal. Another international impeachment involved President Park Geun-Hye of South Korea over her aide Choi Soon-sil using her position to seek funds from several business conglomerates.

Besides, 2016 also saw the demise of former Cuban President Fidel Castro. His legacy continues to be hotly debated, and his demise may see some change in Cuba’s stance as a former key Soviet ally in the western hemisphere.

Turkish President Recep Ergodan faced a failed coup attempt with forces loyal to him defeating the forces trying to seize control in several prominent cities, including Ankara and Istanbul.

Apart from this, 2016 also saw turmoil in the Middle East amid strife continuing between Syria’s Bashar al-Assad and other rival camps with some supporting him and others opposing him. Violence was acute, particularly in Syria and in Yemen. According to UNHRC research, at the start of 2016 more that 65 million people had been forcibly displaced from their homes — up from 60 million in 2015. Similarly, several terror attacks took place in both the developing and the developed world.

Back home, India also saw several terror strikes aimed broadly at the armed forces. Retaliation from India almost brought it to the brink of a confrontation with Pakistan after the September 18 attack on the Uri cantonment.

On the political side, the ruling NDA put behind its losses in the 2015 assembly elections in Delhi and Bihar and was able to form its government in Assam while the satraps in West Bengal and Tamil Nadu continued their political influence after winning the elections. J. Jayalalithaa, who formed the government in Tamil Nadu, died within eight months.

Apart from this, some prominent policy and business happenings in India included the passage of the GST Act, which is one of the biggest tax reforms undertaken in independent India and seeks to replace the indirect taxes with a far simpler system and create a unified national market.

Another major policy decision was the acceptance of the the Seventh Pay Commission’s recommendations relating to approximately 4.7 million central government employees.

Then came the shocker on November 8, when Prime Minister Narendra Modi announced the withdrawal of Rs 500 and Rs 1,000 notes, thus rendering 86 per cent of Indian currency as mere paper. The move has seen several problems along the way in implementation with the opposition attacking the government while the government was seen sticking to its guns by saying it is a necessary first step to tackle corruption.

Apart from this, 2016 also saw corporate India engaged in one of its biggest spats in the open when the Tata Board rather unceremoniously sacked Cyrus Mistry as the group Chairman. Mistry has been accusatory since then and levelled charges of mismanagement and corporate governance failures at Tata Sons.

The world in 2016 thus saw some good and some not so good events. Policy happenings to look out for in the coming year include the rise in Fed interest rates which already have seen an increase once in 2016 and the ensuing FPI outflows from emerging markets as the American economy tightens its monetary policy.

Apart from this, prices of oil could be another important thing to look into for Indian policymakers. Internally, the banking sector and its stress, as well as growth forecasts, post demonetisation, and formal job creation are some of the other things to look out for the early part of the coming year.

Other things to look out for in the domestic arena include the assembly elections, particularly in UP, which could decide how the government moves from here on in the remaining part of its term that ends in May 2019.

Published with Business Standard on December 27, 2016.