Not just a boardroom battle: Here are the real reasons behind the Infosys crisis 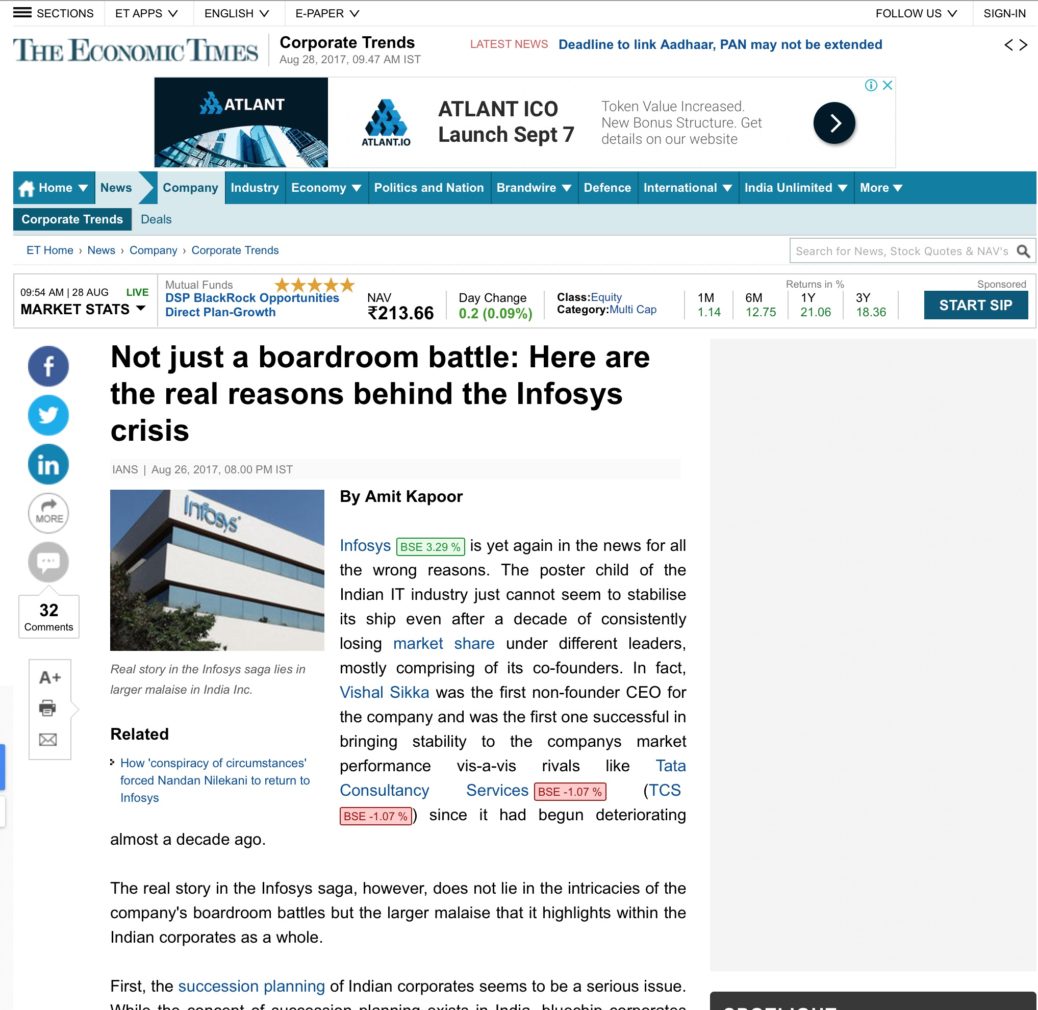 Infosys is yet again in the news for all the wrong reasons. The poster child of the Indian IT industry just cannot seem to stabilise its ship even after a decade of consistently losing market share under different leaders, mostly comprising of its co-founders. In fact, Vishal Sikka was the first non-founder CEO for the company and was the first one successful in bringing stability to the company’s market performance vis-à-vis rivals like Tata Consultancy Services (TCS) since it had begun deteriorating almost a decade ago.

Second, there seems to a lack of clarity on the role that different stakeholders play in a company. Promoters in companies need to define their roles as executives, board members and shareholders. Problems like the one in Infosys arise when promoters overstep their roles and assume different responsibilities at different points of time. The founders at Infosys seem to be having a tough time letting go of their control over the company and often cross jurisdictions as a result. After Murthy stepped down as CEO in 2002, three co-founders succeeded him mostly unsuccessfully in maintaining the company’s growth trajectory. Murthy’s vocal interference in the company’s workings and Nandan Nilekani’s return following Sikka’s exit points to an utter unwillingness of handing over control to an “outsider”. A founder assuming control anytime they feel uncomfortable with operations undermines decisive leadership and puts the stability of the company under threat.

Third, corporate governance seems to be quite problematic among Indian firms. The fact that the issue has arisen in a firm that made the concept popular in India is especially concerning. When the acquisition of Panaya was questioned by Murthy, a shareholder in the company, it behoves the board to address the concerns to the satisfaction of its shareholders. Transparency is the key to ensuring the highest standards of corporate governance. In the board’s defence, they did call for an independent inquiry into the matter and found no wrongdoing. However, it fell short of releasing the complete reports of the investigation as demanded by Murthy.

All these factors – succession planning, clarity of roles and corporate governance – play a crucial role in determining the sustainability of large firms and if they become a ubiquitous problem among Indian corporates, their survival might come under threat. There is also a much larger problem that springs out of the tendency of the old guard to not let go of their companies – the ability to innovate.

Infosys was slowly becoming irrelevant with “back office” processing and IT support work due to large scale automation. Rapid automation calls for a move into emerging sectors like Artificial Intelligence (AI) and robotics for IT firms and Infosys was losing ground in the same. Sikka attempted venturing into these disruptive sectors and the founders who were accustomed to making profits through labour arbitrage did not feel comfortable with such moves.

This is a typical problem with large firms. Innovation does not come easy to them. In most industries, innovators are usually “outsiders” in some sense. Either it comes from a new company whose founder has a non-traditional background or from existing companies through senior managers who are new and unfamiliar to the industry. Such sets of people are usually more able to identify new opportunities and are bolder in pursuing them as well. This is the biggest problem with Infosys and results in slow paced innovation within the company, which is hurting the company itself in the long run. An innovation handicap will mark the company for its slow demise in an industry as fast paced as IT. On a larger scale, it also damages the country’s ability to innovate as a whole, which is quite worrying for its relevance on the world stage.

Therefore, the crisis in Infosys isn’t just limited to the company itself. The Indian corporate sector needs to take copious notes as it unfolds and learn what not to do in order toensure their sustainability. Also, they must learn not to fall into the trap of sticking to old ideas at the cost of innovation.

The article was published with Economic Times on August 26, 2017.