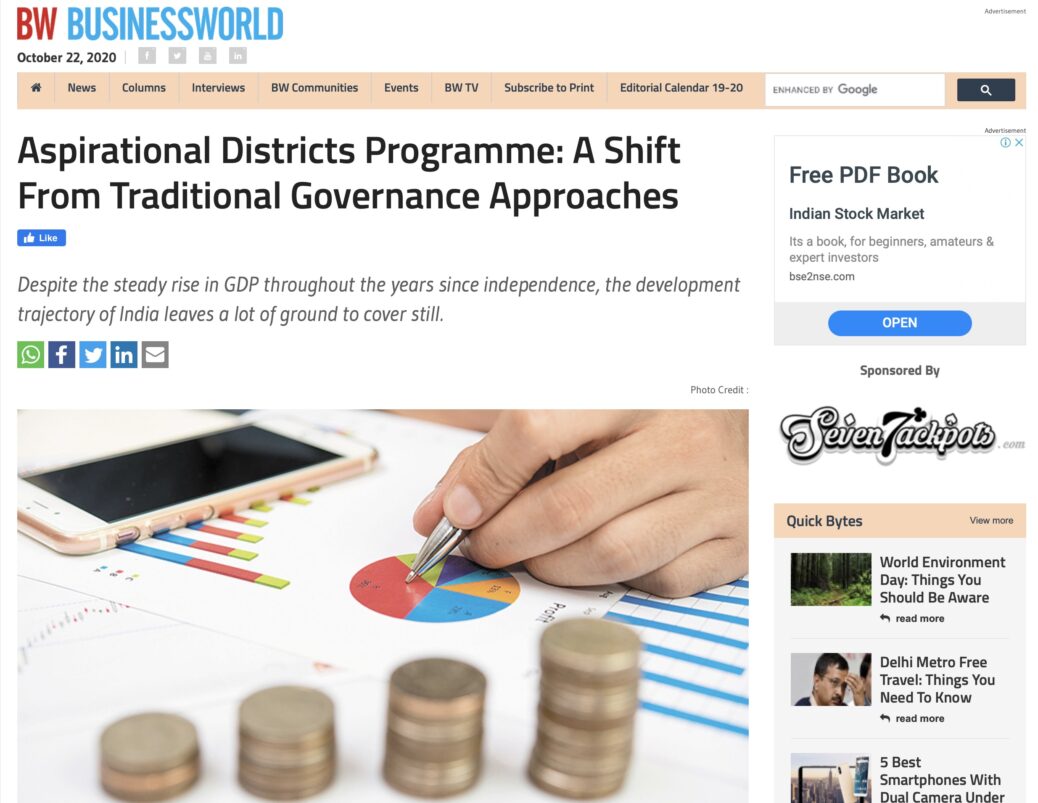 The focus of policy and governance has primarily been on output rather than the outcome. The traditional approach does not look beyond the output to assess the real impact created. It is most apparent in the way the performance of a country is measured in terms of GDP rather than the development outcomes. The Aspirational Districts Programme (ADP) by the Government of India (GOI) is driven by ideas that shift that traditional approach.

Like other countries around the world, India has been assessing its performance within the narrow confines of economic growth. Despite the steady rise in GDP throughout the years since independence, the development trajectory of India leaves a lot of ground to cover still. This shows that economic growth has not been adequately translated into development. The ADP redirects the focus on development by measuring the effectiveness of the intervention against development indicators. These indicators are broadly classified into five pillars, namely health and nutrition, education, basic infrastructure, financial inclusion and skill development, and agriculture and water resources.

The GDP is an insufficient metric for assessing the inequalities within a country, and the inequalities within India are reflected in its vast regional disparities. Hence, the ADP particularly focuses on creating value in the most challenging districts of India. At present, it is implemented in 112 districts across 26 states and one union territory, to address that disparity.

Fuelled by this vision, the ADP was launched by the GoI in 2018. As part of its shift from the traditional approach, the programme not only marked a change in the policy focus but also chose a collaborative form of governance over a top-down approach. accordingly, the Niti Aayog is in the centre anchoring the programme while the state governments drive the main efforts in transforming the districts. The programme also makes use of public-private partnerships, and integrates the external partners within the institutional apparatus of the government so that they help the states bridge critical gaps and improve governance at the grassroots.

The programme actively encourages collaboration across different levels of governance as well as districts. At the same time, it creates an atmosphere of competitive federalism among geographies to incentivise efforts. This blend of collaboration and competitive federalism serves the dual purpose of boosting competition and enabling partnership with the least developed regions to help them transform.

The partners also work with a shared understanding and a shared language of outcome-oriented metrics and data. The data-driven approach to measure impact and identify areas that require intervention aid the partners in driving the transformation. All of these initiatives have been a step away from the existing state of affairs in governance.

As a result, the ADP has achieved significant milestones in its early stages. The districts performed the best and reached closest to their targets in the health and education sectors. The other three sectors have comparatively lagged behind. Agriculture and financial inclusion were found to be the farthest from achieving their targets. Nevertheless, the success achieved so far will inspire greater efforts. The approach taken by the programme has also ensured that no district is left behind. The findings show that all districts have performed fairly equally. Even though there are disparities in outcomes across sectors, those disparities are visible in all districts.

At a moment when the world is finally recognizing the value of human life, the ADP serves as a worthy example of interventions that advance human development and demonstrates an approach to governance that can be replicated in other initiatives as well.

The article was published with Business World on September 23, 2020.