Don’t pass the buck on healthcare 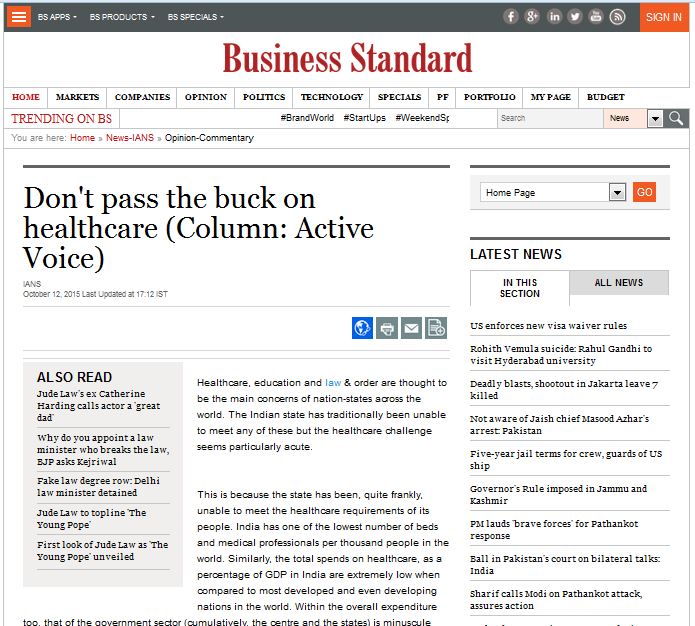 Healthcare, education and law & order are thought to be the main concerns of nation-states across the world. The Indian state has traditionally been unable to meet any of these but the healthcare challenge seems particularly acute.

Of course, the need for efficiently utilising existing expenditure cannot be ruled out and needs to be properly taken care of and monitored. But it in no way suggests that additional finances and resources should not be allocated to the public healthcare system.
Another crucial aspect of the healthcare financing is who pays for medical treatment. At present about 70 percent of the medical expenditure in India is paid out-of-pocket by patients and their families. It has resulted in 63 million people facing poverty every year due to healthcare costs resulting from lack of financial protection.

The draft National Health Policy 2015 takes many of these points into consideration. The policy was released in December last year and proposed several key policy principles. These included among other things reduction of out-of-pocket expenditure and enabling universal access to free essential drugs, diagnostics, emergency ambulance services, emergency medical and surgical care services. The policy also clearly recognises that pubic investments in healthcare should rise to about 2.5 percent (proposed by most expert groups) at least and would be ambitious if it could go up to four percent of GDP. The broad principles also seem to be in line with the principles of Universal Health Coverage (UHC) being sought by the healthcare industry.

A recent position paper of the OPPI (Organisation of Pharmaceutical Producers of India) titled ‘Universal Healthcare and Sustainable Healthcare Financing in India’ proposes a framework for sustainable financing for UHC. It uses the principles of ‘progressive universalism’ proposed in a 2013 Lancet paper as an underlying principle to support hybrid financing of India’s healthcare needs. The paper proposes that by 2020 the healthcare expenditure as a percentage of GDP should reach 6.1 percent. It means tripling of allocation to healthcare from 1 to 3.1 percent in the case of the public sector. Similarly, the number of beds in total should approximately double from 1.8 per thousand people to 3.5 by 2020. Also, there would be an additional requirement of 340,000 doctors by 2020. The paper also talks about varied models of healthcare financing across the world that offer clues to how India could look at solving its healthcare financing problem. The main points of the paper underscore critical elements required in building a robust healthcare system that to a great extent depends on adequate public financing.

The benefits of a universal healthcare coverage leading to a healthy population cannot be overstated. These include improved levels of productivity, improved thinking and cognition abilities, greater ability and propensity to accumulate capital and reduced downside costs of diseases due to preventive healthcare. All these are critical not only from a healthcare viewpoint but also from a growth and competitiveness viewpoint. Investments in healthcare must be increased over the next few years in India from the dismal levels being witnessed presently in the public sector. Within the public sector, the joint responsibility of the centre and the states in India should be treated as such and none should look to blame each other over the lack of adequate funds.

Published with Business Standard on October 12, 2015.