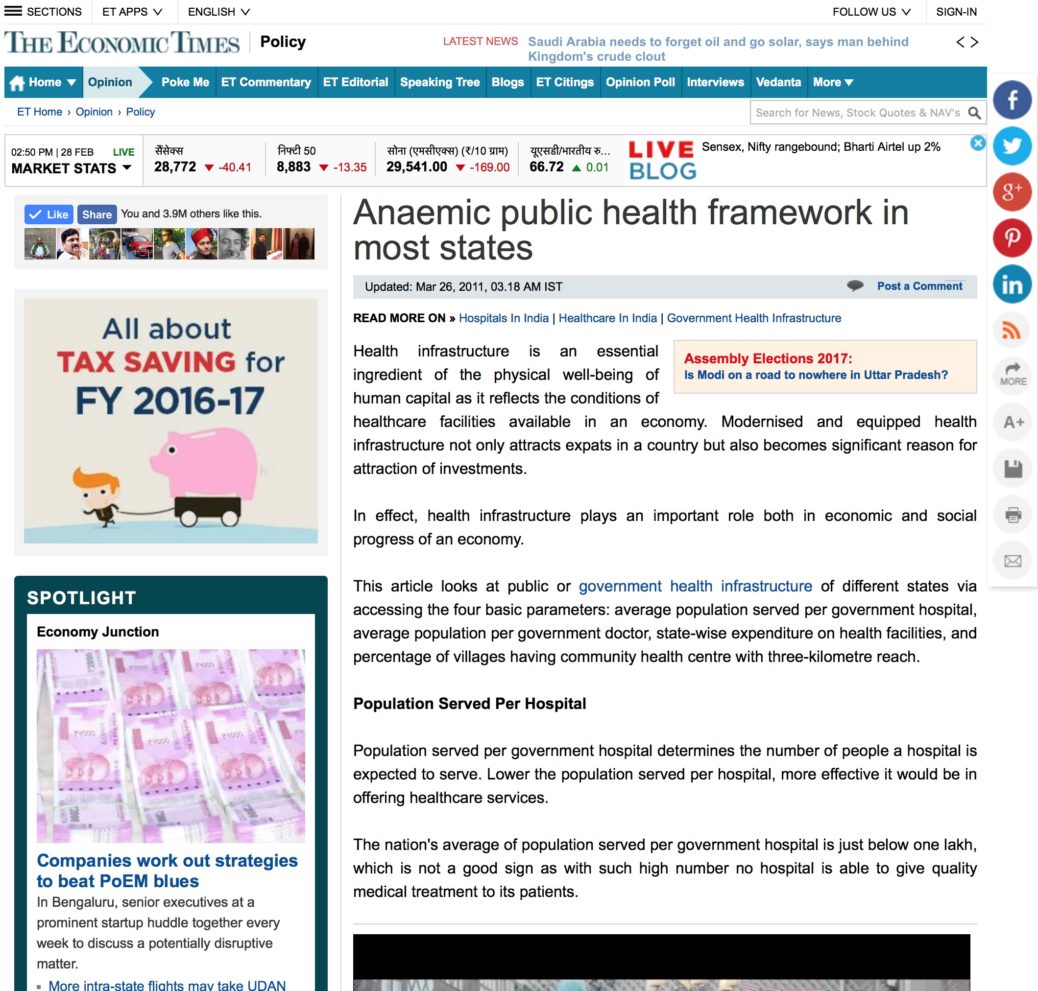 Health infrastructure is an essential ingredient of the physical well-being of human capital as it reflects the conditions of healthcare facilities available in an economy. Modernised and equipped health infrastructure not only attracts expats in a country but also becomes significant reason for attraction of investments.

In effect, health infrastructure plays an important role both in economic and social progress of an economy.

The nation’s average of population served per government hospital is just below one lakh, which is not a good sign as with such high number no hospital is able to give quality medical treatment to its patients.

States like Himachal Pradesh and Arunachal Pradesh have done exceptionally well and achieved 4,692 and 5,920 headcounts served per hospital respectively, which shows their enhanced capability in treating the patients effectively.

The situation in Andhra Pradesh, Uttar Pradesh and Madhya Pradesh is totally out of order as the hospital is expected to serve two lakh people, which is unacceptable.

Average population served per doctor reflects the number of people a doctor is meant to serve. The lower it would be, the more efficient the doctor will be in treating his patients.

In some of fastest-growing states, Gujarat and Maharashtra with GDP growth rate of 13% and 8.59%, respectively, the average population served by one government doctor is 25,168 and 24,237, respectively, which is alarming.

There is a big shortage of government doctors in these states and people are left with no option but to go to expensive private hospitals.

Smaller states like Goa and Chandigarh secured the best grade, as average population served per government doctor is 1,763 and 1,728, respectively, which makes the doctors more effective and reliable, and the number of patients and doctors don’t mismatch.

Health infrastructure is highly capital-intensive, bringing the responsibility to the government to build it for its citizens so that healthcare facilities can be availed by everybody.

The lowest per-capita government expenditure on health is in states like Uttar Pradesh, Bihar and Karnataka where the number of people below poverty line – 25.5%, 32.5% and 17%, respectively – is quite high.

It means that nearly a fifth of the population in these states is deprived of the healthcare services due to inadequate government investment.

Three northeastern states, Mizoram, Sikkim and Arunachal Pradesh, have the highest government expenditure per person – 2,618.50, 1,481.50 and 1,479.80, respectively – which also justifies the lower death rates in these states of nearly 5% while the country’s annual death rate is 7.4%.

Half of the population in Jharkhand and Madhya Pradesh remains deprived of healthcare as they have just 52.9% and 55.6%, respectively, accessible community healthcare centres.

States: The Road Ahead

It is, thus, imperative that states would have to focus on improving healthcare infrastructure and they still have a long way to go when compared to global standards.

Health infrastructure of a state can be categorised into three stages depending on quality and accessibility.

Superior healthcare infrastructure: These states are most prepared for future healthcare requirements of dealing with a growing population at a natural growth rate of 15%. These states can be great assets to provide medical support to other states and focus on building high-end healthcare practices and infrastructure.

Restrained healthcare infrastructure: States like Orissa, Karnataka, Sikkim and Delhi face the challenge of providing accessible healthcare to all and should aim at opening new hospitals and expanding the current capacity of hospitals if investing fresh capital is a constraint.

They need to invest by accessing the gaps and through effective implementation plan in opening new healthcare facilities and, more importantly, recruiting new medical practitioners.

The Article was published with Economic Times on February 5,2011.