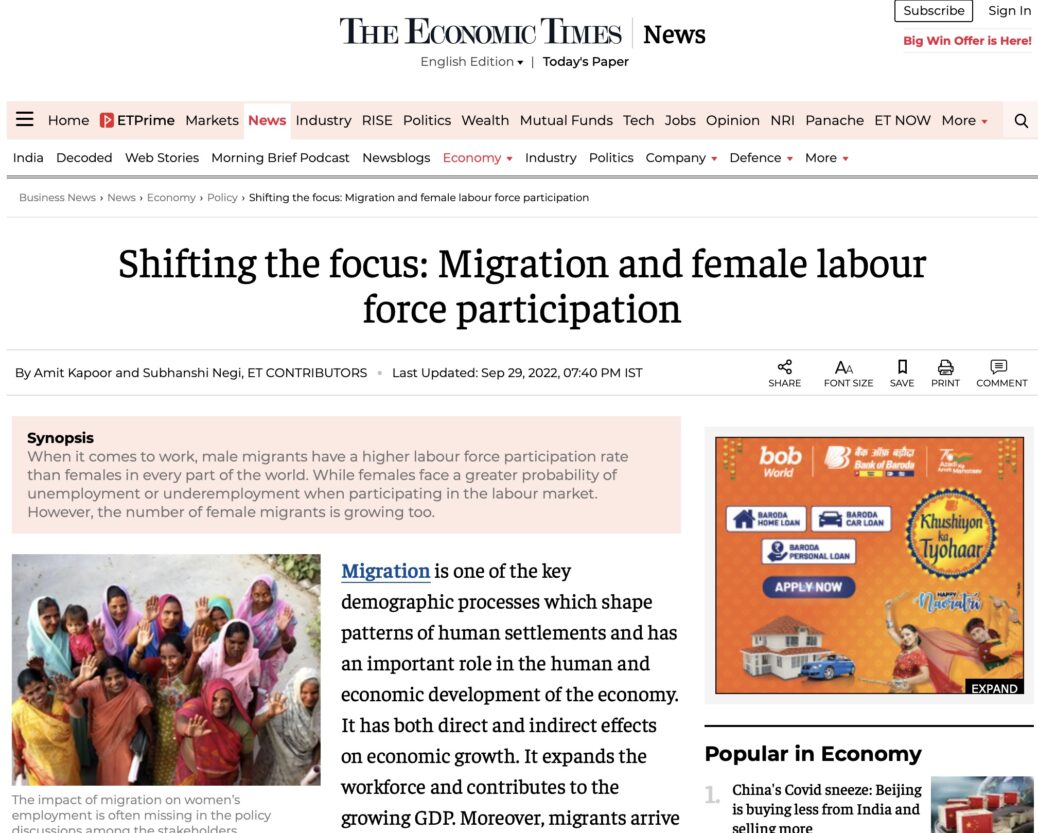 Migration is one of the key demographic processes which shape patterns of human settlements and has an important role in the human and economic development of the economy. It has both direct and indirect effects on economic growth. It expands the workforce and contributes to the growing GDP. Moreover, migrants arrive with skills and abilities, thus contributing to the stock of human capital in the region.

More individuals than ever before are moving around the globe. For themselves and their family, many of them are looking for better chances. A disaster or conflict may cause some people to relocate too. Whether forced, consensual, or somewhere in between, gender is at the centre of migration because traditionally, moving from one region to another in search of better life prospects is considered a male venture, although females increasingly migrate as well.

As per the International Labor Organization report, female migrants are estimated to be 164 million, accounting for almost half of the world’s migrants in 2017. There is a constant increase in the proportion of female migrants in almost all parts of the world, India being no exception to this trend. Though, unlike the world, the migration rate of women in India has been considerably greater than that of males for decades. As per the Periodic Labour Force Survey (PLFS) of 2020-21, the female migration rate was 47.9%, which was 37.2 percentage points greater than the males. Such a vast disparity in the migration rate exists in both rural as well as urban sectors.

When it comes to work, male migrants have a higher labour force participation rate than females in every part of the world. While females face a greater probability of unemployment or underemployment when participating in the labour market. However, the pursuit of better employment opportunities, higher education and wages are driving up the participation rate of female migrants also. Between the two censuses of 2011 and 2001, the number of women who migrated for either work or business grew by more than 107%, which was significantly greater than the number of men.

Although in India, it is not the driving force for migration, especially among women. Most of the studies undertaken till today, using Census, National Sample Survey, PLFS or any other primary research data, state that marriage is the dominant factor in female mobility in our country. About 86.8% of females cited marriage as their primary reason, and only 1.9% of females migrated in search of better jobs or higher studies, according to the PLFS 2020-21 data. Internal migration of women motivated by marriage is considered as one of the major bottlenecks in their entry into higher education, skilling and productive employment ecosystems.

According to many studies, though better economic opportunities seem to be a secondary reason for female migration, a considerable portion of female migrants do end up engaging themselves in various economic activities. It is supported by the data of NSSO 2007-08 data, which reveals that 31% and 13.3% of the women migrants who moved for marriage are working in rural and urban areas, respectively, which was similar to the general levels of female labour force participation of that time. However, they usually tend to be concentrated in a narrow range of female-gendered professions with low wages, like domestic workers in households or in blue-collar jobs like tailoring, handicrafts, or factory workers.

The impact of migration on women’s employment is often missing in the policy discussions among the stakeholders. Unseen yet widespread, migration has vast implications on women’s ability to find work and sustain it, especially when it is guided by other reasons. In spite of that, the majority (57.4%) of the female workforce in India are women migrants who moved for marriage, as per the report on migration by the Ministry of Housing and Urban Poverty Alleviation. In addition to this peculiar behaviour, the recent phenomenon of ‘feminization of migration’, indicating the increasing proportion of females reporting economic reasons for migration, can be seen as an opportunity to increase female labour force participation in the country. It is crucial for the Indian economy to engage more females in the workforce if it wants to reap most of the benefits of the demographic dividend, ultimately contributing to the goal of a $5 trillion economy. Therefore, it is important to understand how gender and migration interact with each other, given that each gender has different motivation factors and economic impact. Gender-specific focus on migration can help the government to formulate favourable policies motivating women migrants to become the breadwinners of the family as well. Increasing the percentage of women in the workforce by a factor of two can boost India’s growth rate to 9%, according to the World Bank. Therefore, the goal should be to formulate policies that enhance female labour force participation as well as increase their active role in economic growth and development.

The article was published with Economic Times on September 29, 2022