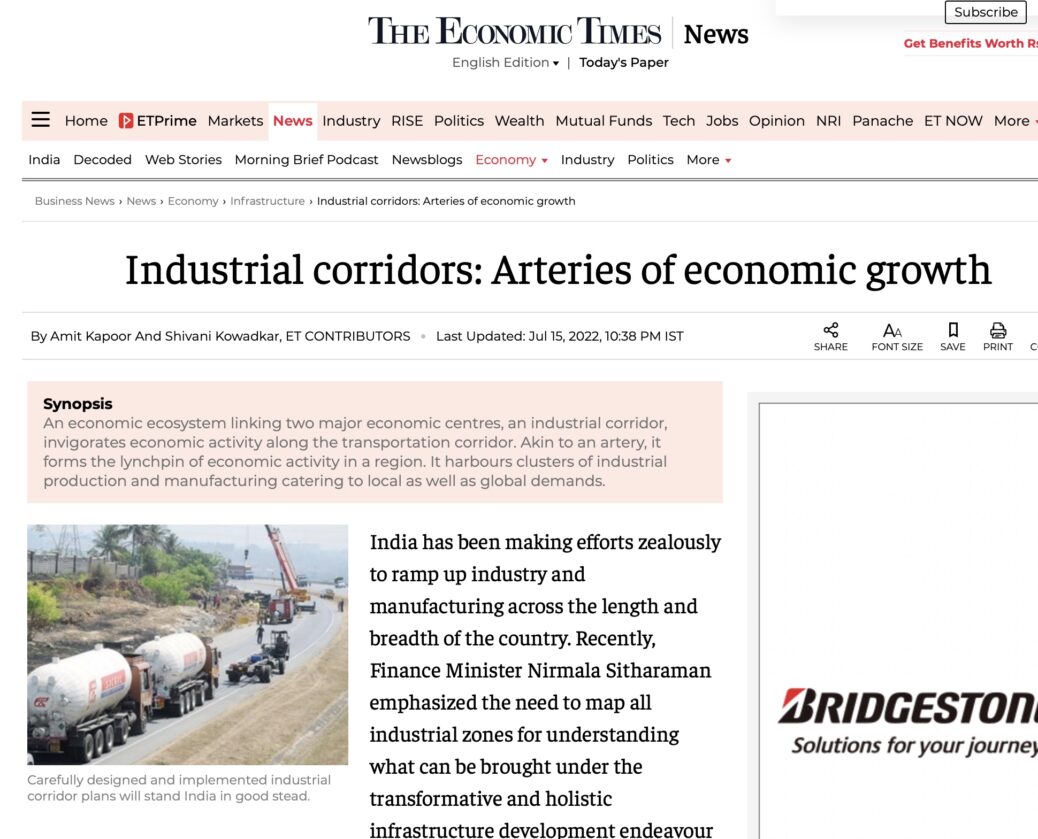 An economic ecosystem linking two major economic centres, an industrial corridor, invigorates economic activity along the transportation corridor. Akin to an artery, it forms the lynchpin of economic activity in a region. It harbours clusters of industrial production and manufacturing catering to local as well as global demands.

An economic ecosystem linking two major economic centres, an industrial corridor, invigorates economic activity along the transportation corridor. Akin to an artery, it forms the lynchpin of economic activity in a region. It harbours clusters of industrial production and manufacturing catering to local as well as global demands. By linking infrastructure and industry, they leverage the interdependence among different sectors. The NICDP aims to create such economic nodes with key features such as climate resilience, sustainability, multi-modal connectivity, and urban agglomeration. One of the central features of industrial corridors is their capacity to promote equitable urbanization. Urbanization has been associated with greater economic growth, and hence it is crucial for the spread of urbanization to be uniform. According to the World Economic Forum, about 35% of the projected growth in the world’s urban population until 2050 will come from India, China, and Nigeria, combined. What is more important to be taken note of is that among the three countries, the absolute growth in urban population is estimated to be the highest in India. It is then a matter of immense importance to ensure that this exponential growth in urban population is equitably distributed within the country, lest the growth gets concentrated in a few regions.

A study titled ‘India’s Urban System: Sustainability and Imbalanced Growth of Cities’, points to the fact that million-plus cities in India increased in number from 5 (with a share of the total urban population of 18.81%) in 1951 to 23 (32.54% of the urban population) in 1991, and to 53 (42.62% of the urban population) in 2011, whereas the share of small and medium cities in total urban population registered a consistent decline over the years. Industrial corridors hold the potential to address this challenge as they foster a space conducive to the development of multiple urbanized economic centres. In the current scenario, the mega-cities in India that attract waves of migration from lesser developed regions are few and far between. The spread of industrial corridors creating urban economic ecosystems in different locations would ease the pressure to migrate to a mega-city centre for an improved life. Additionally, the overburdened civic infrastructure in a handful of densely populated large cities will see some respite.

Apart from distributing economic growth, industrial corridors will also facilitate seamless movement of people and goods, adding a thrust to manufacturing capacities. In unison with the Gati Shakti initiative – a multi-modal infrastructure connectivity endeavour – the development of industrial corridors will further enhance India’s manufacturing competitiveness, increasing the share of manufacturing in the GDP. The Gati NSE 2.52 % Shakti endeavour adopts an integrated planning approach to promote cohesion by breaking down silos between various arenas including roads, railways, airports, ports, waterways, and mass transport.

This integrated planning approach will help grow industrial corridors holistically when brought under the rubric of Gati Shakti. One of the flagship Industrial Corridor initiatives in India is the Delhi Mumbai Industrial Corridor (DMIC). About 24 investment nodes across six states have been identified for the DMIC. Of the 8 Industrial Cities proposed in the first phase, work on 4 cities is underway, for which sanction was received in 2014–15 and 2015-16. The cities of Dholera (Gujarat), Shendra Bidkin (Maharashtra), Vikram Udyogpuri (M.P.), and Integrated Industrial Township (Greater Noida, U.P.), with an allotment of 173 Plots (851 Acre), are attracting investments from companies of South Korea, Russia, China, UK, Japan and India, and have seen investments of around Rs. 16,760 Cr., generating 21,000 employment opportunities. There is huge scope for harnessing the economic potential of each one of the Industrial Corridors planned.

The article was published with Economic Times on July 15, 2022.