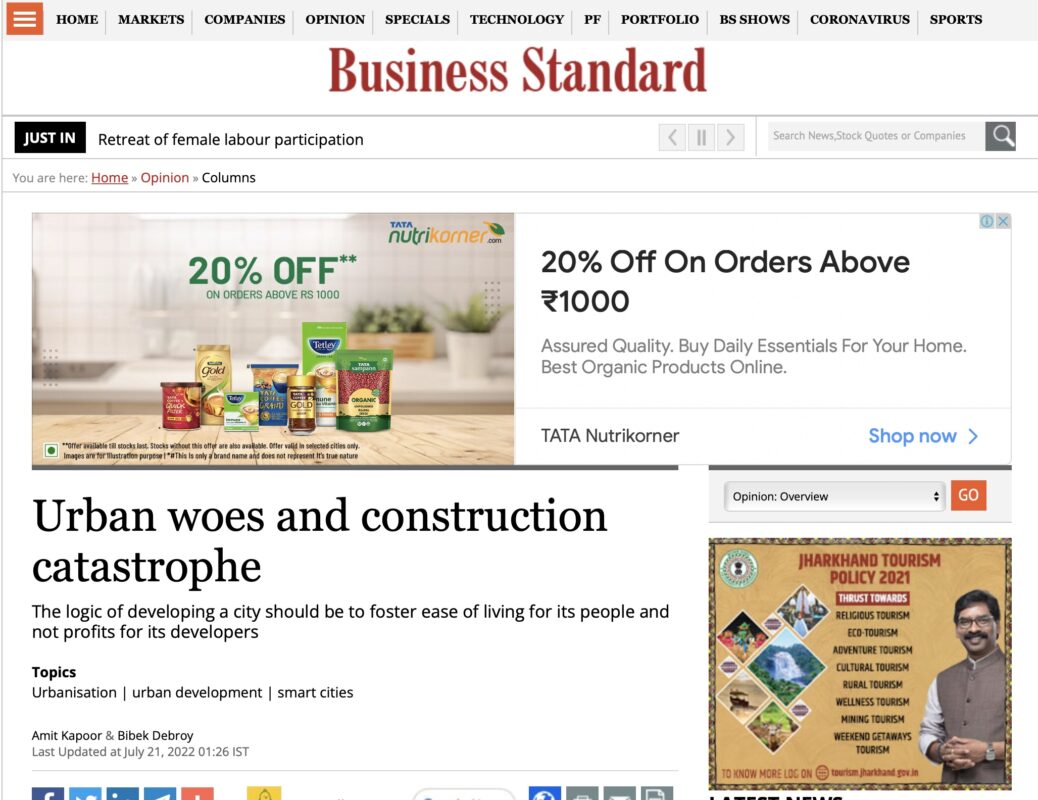 The process of urbanisation stipulates a need to expand as the number of people settling in cities increases. This expansion rests on a smart city design where access to everyday necessities and sources of leisure are not restricted or entirely cut off. Simply put, the logic of developing a city should be to foster ease of living for its people and not profits for its developers.

Undeniably, cities need to expand as the population living in them increases. The recently released World Population Prospects 2022, by the United Nations, has stated that the population in India is expected to surpass China’s by 2023 and will remain so till the end of this century. With close to 35 per cent of the people already living in cities by 2020, this number is set to increase with the population rise in India. In this light, expanding and developing cities are not only desirable but imperative. Apart from the administrative tasks of zoning and allocating land, developing cities requires building more and better housing facilities, schools, hospitals, working spaces and markets, ensuring access to safe drinking water and water management, and reducing pollution. Moreover, it is equally important for this expansion to be complemented with accountable and transparent governance. Additionally, these smart city designs need to prioritise facilitating movement and accessibility and enhance the quality of life. This is linked with another critical aspect of city development: Strengthening its transport infrastructure, which positively impacts the attractiveness of a city. Whereas issues like traffic, repeated road closures, and diversions due to construction and congestion negatively impact the liveability of a place, it also extends the debate to the question of who we are building these cities for.

The “Performance and Audit Report on Land Acquisition and Allotment of Properties in Noida, Uttar Pradesh”, by the Comptroller and Auditor General, remarked: “There is evidence of a complete disregard of basic tenets of governance viz., adherence to public interest, accountability, transparency in decision making, ethics and integrity, to name a few.” The report also held that the findings suggested instances of “contravention of law” and “wilful concealment of facts”. The nexus between the authorities and builders, as well as multiple violations that went unchecked, resulted in massive losses for the government and distress for the people, as the report stated. However, this brazen corruption and disregard for the law are not peculiar to Noida itself.

On its first appearance, Gurugram, the city of companies, as one might declare, appears as a modern infrastructural marvel with its high-rise structures — offering affordability to luxury to everyone. However, the long traffic hours, congestion on the National Highway connecting Delhi and Gurugram, and the closure of main roads on account of more construction, leading to longer and jammed alternative routes for the commuters, have created more chaos than improving things. This rampant construction also has profound environmental costs which go unnoticed, like the declining groundwater table in the city and low availability of potable water. It is also an issue of resource occupation where significant portions of main roads are cut off or re-routed in the name of construction. One meets such a view as one enters Gurugram from the sides of the Ambience Mall, where private enterprises are carrying out construction by restricting a straight road and forcing daily commuters to take unnecessary longer routes. In fact, this is not the first instance where private developers are creating more mayhem for the city’s residents. For the people living in Gurugram, water scarcity, poor drainage infrastructure, and roadblocks every few metres are only the tip of the iceberg. Inadequate planning and questions over the structural integrity of the buildings exaggerate the problem.

One can contend that what gives these companies their power is their wealth and the vested interests of the few. However, what is happening in the city is not a unidimensional study of corruption. It is also a study of bad design and a city experiment gone wrong. In this light, when we contextualise the decision to amend the Punjab Land Preservation Act to open up 33 per cent of the forest land, including over 16,000 acres of the Aravalli Forests in Gurugram, the conundrum of urbanisation becomes apparent. But is it urbanisation that we blame or profitability over it?

Urbanisation is one of the key determinants of economic development and growth, and investment in cities should be driven by it. City design does not have environmental implications alone. How a city is designed greatly influences the kind of inequities and spatial relations produced in that region. Complications arise when companies and developers profit from poor designs and use them to monopolise resources. In a way, what private developers have done in Gurugram is not only monopolising a resource but dominating the whole process of urbanisation for their own advantages. What lies ahead then are not only soft policy actions to regulate land allocation processes and foster transparency. But most importantly, there is an urgent need to implement assertive policy actions to make sure that the assets that are, in essence, public assets remain with the public. For this, in complete contradiction to what is usually argued, public assets should be managed by the public sector to ensure that resources are properly regulated and not captured.

The article was published with Business Standard on July 20, 2022.