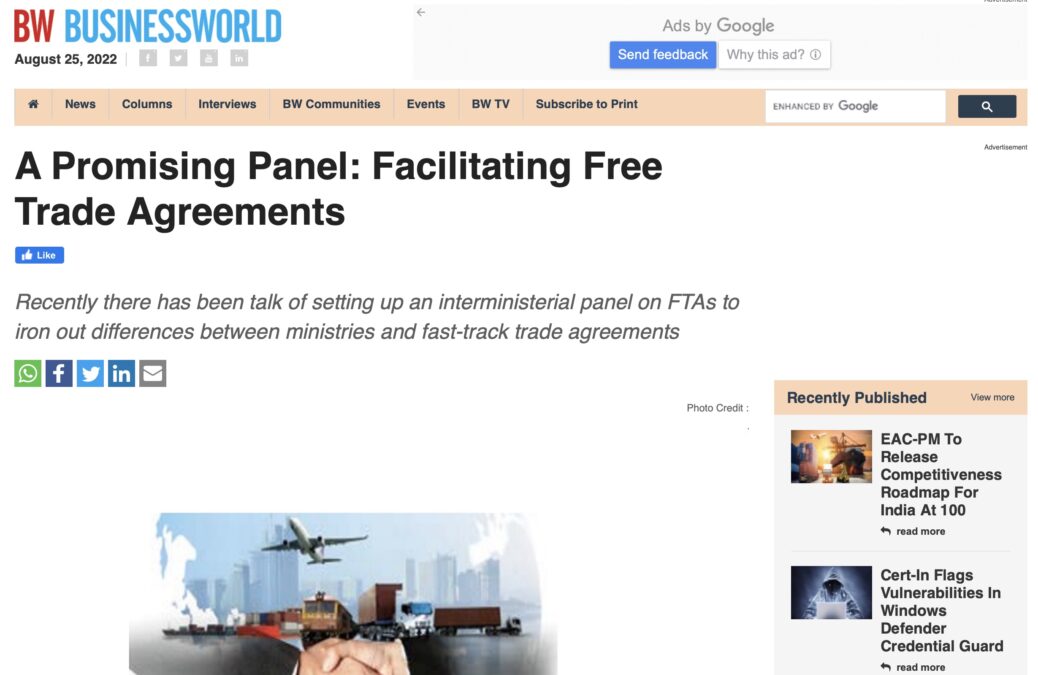 At a time when international trade is expected to slow down in the face of geopolitical tensions, buttressing different means to facilitate trade is of great importance. Free Trade Agreements (FTA) form a major component of the global trade architecture as they contribute to a substantial boost in trade flows between partner countries. India has witnessed a deep integration with global economic trade over the years. Indian exports have performed well, with the cumulative value of exports during April-November 2021 registering a positive growth of 51.34 percent over the same period in 2020. India’s merchandise exports to its FTA partner countries registered a growth of 20.75% in the last five years. India’s liaison with FTAs has seen ups and downs over the last few decades. The decade spanning over 2000-2010 saw a substantial increase in free trade agreements, followed by a hiatus wherein no major agreements were signed. Many began questioning India’s FTA policy, as concerns surfaced around India not benefiting as much as the partner country in a range of agreements. There was a slowdown in the momentum of entering into FTAs. This pause was a much-needed one as it helped India reevaluate its FTA approach. Having re-evaluated our FTA approach, the country is now aiming to invigorate greater trade flows through free trade agreements by finding solutions to overcome challenges faced in the past and pave the way towards a more fruitful engagement with countries through FTAs. The review of our approach is in line with the goal of boosting exports to 1 trillion dollars each in merchandise and services by 2030. Recently, there is talk about setting up an inter-ministerial panel on FTAs to iron out differences between ministries and fast-track trade agreements. The proposed panel has the potential to add more ease in inter-departmental coordination to India’s attempt at consciously framing FTAs in a bid to revamp its approach.

Free Trade Agreements are meant to deepen economic engagement, reduce tariff and non-tariff barriers between countries and increase bilateral trade between countries. FTAs have led to an increase in India’s exports to multiple partner countries – from $25.13 billion in 2015-16 to $31.49 billion in 2020-21 and from $18.60 billion in 2015-16 to $22.08 billion in 2020-21 to ASEAN and SAFTA respectively. Additionally, the data provided by the Department for Promotion of Industry and Internal Trade suggest that in the last five years, the cumulative investment received from the countries India shares FTAs with is around $89.46 billion. However, a major concern on the FTA front for India is the increase in trade imbalance – with India’s imports from partner countries far exceeding its exports to it. To ensure an equal partnership wherein India benefits from the trade flows accrued, it is important to strengthen negotiations in a way that concerns across sectors are addressed. The key to leveraging FTAs better lies in our ability to strike a balance between global economic integration and enhancing the domestic producers’ capacities.

The government has taken efforts to assess the causes underlying the trade imbalance with some countries. In this process, challenges ranging from non-tariff measures to restricted market access for Indian exports became clearer. Providing different industries with a platform to express their concerns is of great significance. The India -South Korea FTA (CEPA) signed in 2010, is one example that showcases the trade imbalance, with India’s total exports to South Korea in FY21 being $4.68 billion against imports of $12.77 billion.  The domestic steel industry has, in the past, raised concerns around the inclusion of more products in the ambit of the India-Korea FTA, citing the adverse impact of cheaper imports from South Korea. They have been more in favour of wanting Korean steel companies to set up manufacturing facilities in India. Process Plant and Machinery Association of India (PPMAI), an apex body representing Capital goods and Process Equipment Manufacturing and Exporting, also raised the issue of a surge in metal and capital goods imports in the country, especially from multiple FTA-partner countries like Korea, Indonesia, Malaysia, and Japan. Additionally, Indian exporters are faced with other hindrances to exports in the form of non-tariff measures experienced in countries including the US, UAE, UK, Germany, France, Japan, and New Zealand. Through non-tariff barriers, countries attempt to make compliance harder for exporting countries. This is often utilized as a means to restrict imports. While addressing this challenge in negotiations with FTA partners is crucial, conveying information related to global procedures and norms to domestic exporters is equally important. The Government is actively addressing these challenges. The Minister of Commerce & Industry, Piyush Goyal, urged the Indian industry to suggest areas for intervention through research, guidance to exporters, and deeper engagement with states.

The proposed inter-ministerial panel holds immense promise to address such challenges, and facilitate a dialogue between different industries. Earlier this year, India signed FTAs with UAE and Australia, while talks with Canada and UK are underway. A major agreement between India and the EU is also in gestation. India’s exports to the region registered a 57% growth in FY 2021-22 to $65 billion, placing India in a trade surplus position with the EU. Given the economic potential of the agreement and the fact that the talks have resumed after a gap of around 9 years, addressing sensitive issues pertaining particularly to the dairy and the auto sector should gain focus. India’s renewed and well-thought-out approach to FTA engagement is an encouraging development considering that the impact of an agreement is prolonged, stretching into the future for years together. By helping negotiations engage with sectoral interests, concerns, and propositions, and by facilitating greater coordination among ministries, the panel would contribute to the efforts underway for strengthening FTAs.

The article was published with Business World on August 16, 2022