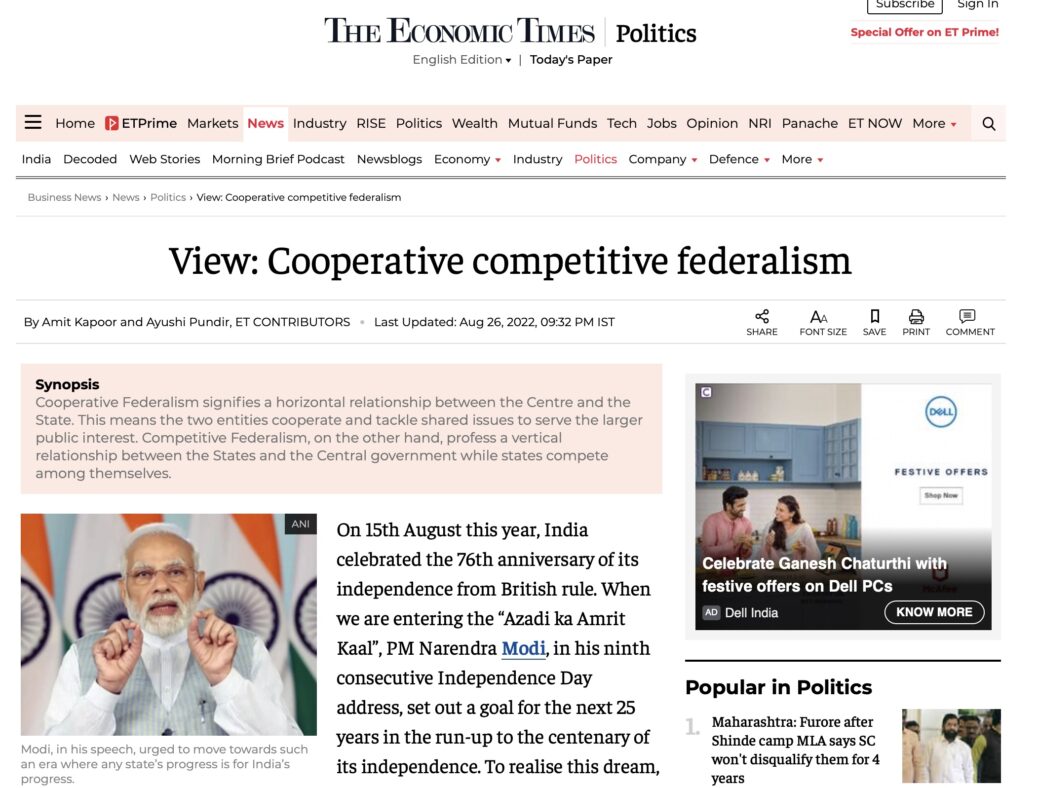 On 15th August this year, India celebrated the 76th anniversary of its independence from British rule. When we are entering the “Azadi ka Amrit Kaal”, PM Narendra Modi, in his ninth consecutive Independence Day address, set out a goal for the next 25 years in the run-up to the centenary of its independence. To realise this dream, he asserted that “Sabka Prayas” is needed to take the country forward. States, as an important legislative pillar, have a crucial role to play here. PM called for “Competitive Cooperative Federalism”, where states seek to outshine each other to reach new peaks of development.

Cooperative Federalism signifies a horizontal relationship between the Centre and the State. This means the two entities cooperate and tackle shared issues to serve the larger public interest. Competitive Federalism, on the other hand, profess a vertical relationship between the States and the Central government while states compete among themselves. Cooperative and Competitive Federalism, though seem to be at loggerheads, aim towards the common objective of economic growth and welfare of the nation in an equal and equitable manner. When our Constitution was first created, it only comprised the notion of cooperative federalism through mechanisms like the Inter-state council, Zonal council and 7Th schedule. But in the course of time, as States competed to attract capital and Investment to facilitate and stimulate economic activity and improve administrative efficiency, the need for Competitive capitalism was founded. It ensures minimum waste and maximum resource usage by stimulating healthy competition among states in creating physical and social infrastructure.

PM Modi, in his address, acknowledged that the Centre and States might differ in their schemes and in their style of working, but dreams for a nation cannot be different. He urged to move towards such an era where any state’s progress is for India’s progress. Many states have played a great role in taking the country forward, have led and worked as examples in many fields. This gives strength to our federalism. But today, we need not just cooperation but competition as well to foster development. This is not the first time he emphasised implementing the model of Cooperative Competitive Federalism.

The government’s public policy think tank, NITI Aayog- set up to strengthen cooperative federalism- called for a mix of cooperation and competition back in 2017, putting the onus on states to drive transformation in India. NITI Aayog’s Index approach, whereby it releases sector-specific indices like School Education Quality Index, Sustainable Development Goals Index, State Health Index, India Innovation Index, Composite Water Management Index and Export Preparedness Index, has heralded a new wave of healthy competition among states. The Aayog also releases rankings on the performance of Aspirational Districts every month. The Aspirational District program was launched in 2018 with the objective of quickly and effectively transforming 112 most under-developed districts across the country. The combination of cooperation and competition ensures that these districts not only compete with each other to become the best in their respective states but also seek the support they need. The programme has now expanded to focus on the progress at the block level within each district.

The Centre also releases a Business Reform Action Plan, under which states are categorised and ranked as ‘top achievers’, ‘achievers’, or ‘aspirers’. This is to improve the business climate, cultivate a culture of learning from each state’s best practices and become the most popular investment destination globally. Increased financial devolution on the recommendations of the Fourteenth Finance Commission, will allow the states to cater to their individual needs better. The passing of GST bill is another step in achieving the “pooled sovereignty” as described by our former Finance minister Arun Jaitley, which would bring a big change in the working of federalism in the country.

Achieving both Cooperation as well as Competition on a national level is a difficult task; thus, it mandates a collective responsibility of the Central and State governments. While prosperous States may be able to execute both policies effectively, economically backward States would require the Centre’s support to achieve their goals. Even after giving the needed financial support, we cannot expect all the states to perform uniformly due to the differences in their literacy levels, skilled workforce and other prerequisites for development. For the States to compete in a truly fair fashion, there is a need to provide a level-playing field. Allocating resources balancing demographic management, growth inequality, needs of states and performance incentives for progress by the Fifteenth Finance Commission is a step in the right direction. Moreover, it is imperative to implement the 74th Constitutional Amendment in its true letter and spirit. It will allow for greater independence in decision-making to local governments which will further improve nation’s competitiveness.

The one thing which Covid-19 pandemic has taught us is that individual efforts are not enough to tackle national exigencies and there is a constant need to strengthen and renew the cooperative spirit in Indian federalism. On the other hand, the competitive spirit will ensure the readiness of the nation to face such contingencies by driving the States to innovate and generate the requisite bulwark. Competition balanced out by cooperation have the potential to enable India become a developed economy by 2047.

The article was published with Economic Times on August 26, 2022.