Political And Economic Implications Of Brexit 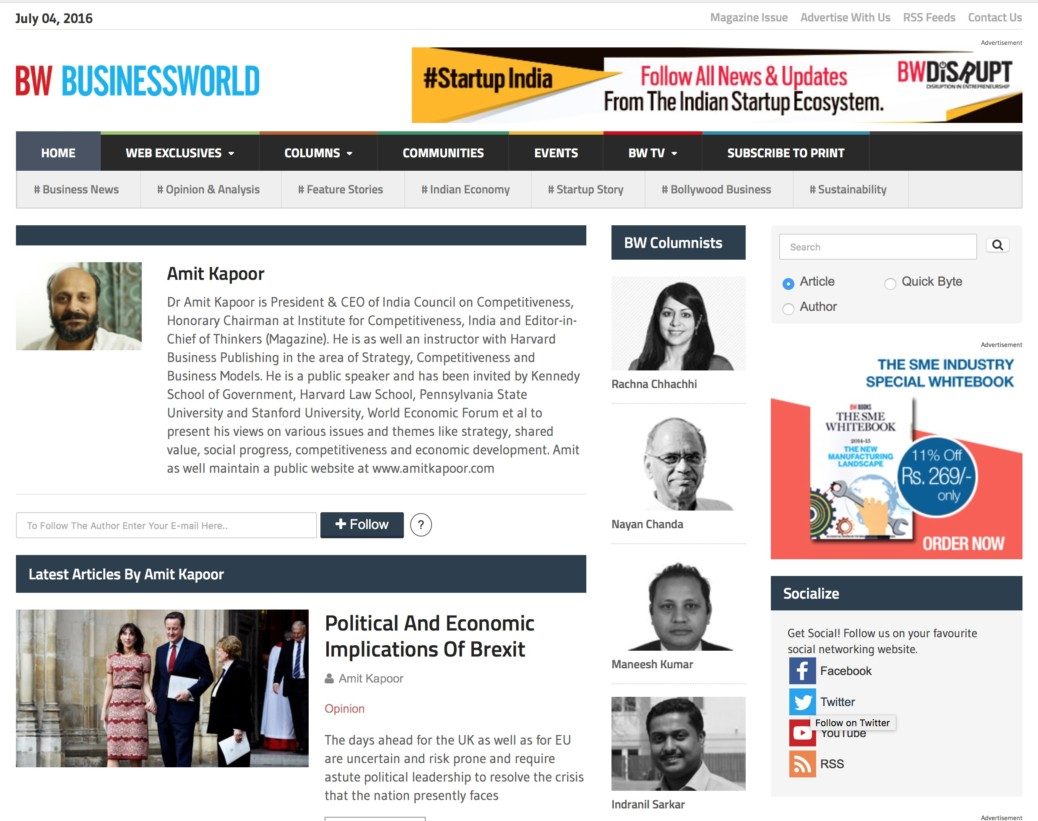 Several exits or rather commitments to exit have happened in the past few weeks. These pertain to both individuals as well as countries. After Raghuram Rajan’s decision to not seek a second term with the RBI, Lionel Messi has retired from International football after a heartbreaking defeat of his team Argentina to Chile in the final of Copa America. Messi is only 29. These have been termed respectively as ‘Rexit’ and ‘Mexit’. Another rather serious commitment to exit, which has almost plunged a nation into a constitutional crisis of sorts and has impacted financial markets worldwide, is ‘Brexit’. Through an approximate 52 to 48 per cent vote Britain has decided through a referendum to sever its 43 ties with EU.

Some have tried to assess why did the British vote the way they did? It also raised questions about the efficacy of a direct democracy? Brexit and the choices of the people surrounding the exit can be best understood in terms of its political fallout as well as the financial and economic consequences of it in the immediate, medium and long-term.

There are four interesting insights on the political and constitutional side. First, that the issue of immigration is a crucial one for people even today, and there can be irrationality about choices about this despite the fact that it may fly in the face of economic logic. Second, a pro sentiment in some parts is not shared in some other parts. For example, Scotland and London have voted to stay in the EU but were balanced by other parts where people saw immigration as a significant threat. Where does this leave the country regarding its political and economic evolution is a question, which is on the mind of most political and economic thinkers today.

The referendum has created deep fault lines in the constitutional landscape of the United Kingdom. Already there are talks of by Scotland’s First Minister Nicola Sturgeon to hold a referendum to stay or leave the UK. The third point on the political side emanates from the second issue and pertains to a crisis of leadership. Had Mr. Cameron been wise and pragmatic enough he could have averted this constitutional crisis by not calling for a referendum and understanding the limitations of direct democracy. Now he has left his nation in a deep crisis. Finally, on the political side, the exit of Britain still has some ambiguity. It is a long process and is as yet not legally binding. Politically it will be unwise to go against this sort of a mandate. And this brings us to the financial and economic consequences of Brexit.

On the immediate economic and financial side, the pound sterling took a beating on the stock markets with it depreciating an astounding 11 per cent against the dollar immediately post the verdict. It was a historic 31 year low against the dollar post the results of the referendum. The major stock markets fell post the referendum as did major banking stocks including Lloyds, which was down 30 per cent, RBS was down 34 per cent and Deutsche Bank, which was down 17 per cent. In the medium term what is likely to be expected is that policymakers from Europe will take the referendum seriously and invoke Article 50 of the Lisbon treaty for an exit. If this happens, then it is advisable that Britain does not completely reset the trade relationship with EU according to WTO rules and adopts the approach Norway has regarding trade with EU.

In the long term, a survey by IMF on June 17 has already foretold the negative impacts of Brexit. In had calculated two scenarios and mentioned that output could fall by 1.4 per cent in the limited scenario and by 5.6 per cent in the adverse scenario. The limited scenario is assumed to have trading conditions similar to what exists between EU and Norway, and the adverse scenario is seen having renegotiation and following trading rules of World Trade Organization. Overall the days ahead for the UK as well as for EU are uncertain and risk prone and require astute political leadership to resolve the crisis that the nation presently faces. One hopes that Britain finds appropriate leadership to chart its course amidst a rising political and financial storm.