In an era of productivity slowdown, India has entered AI arena at perfect time 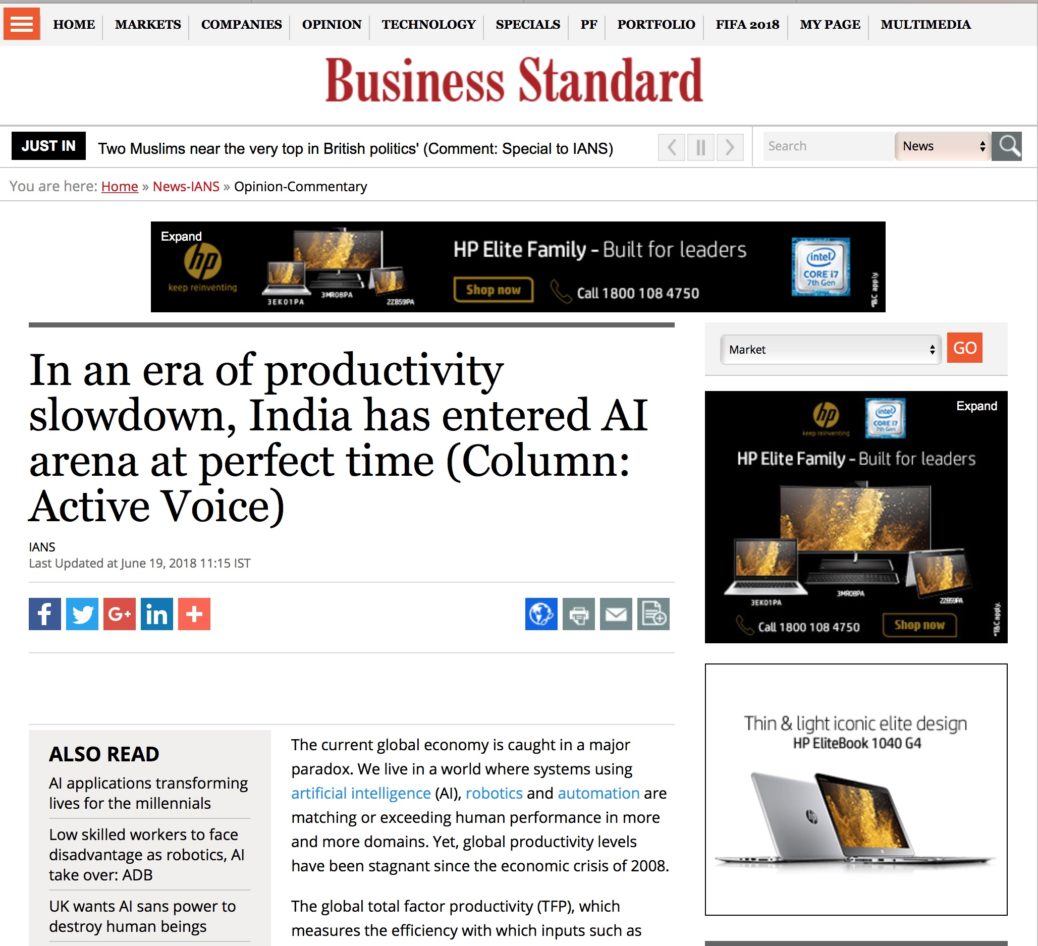 In an era of productivity slowdown, India has entered AI arena at perfect time

The current global economy is in a major paradox. We live in a world where systems using artificial intelligence, robotics and automation are matching or exceeding human performance in more and more domains. Yet global productivity levels have come to a standstill since the economic crisis of 2008. The global total factor productivity, which measures the efficiency with which inputs such as labour and capital are used, grew at a rate of 1.2 percent per year on an average between 1999 and 2008, slowed to 0.3 percent till 2012 and has stagnated since then.

For the advanced economies, including the United States, Japan and the Euro, the total factor productivity (TFP) growth has either stagnated or fallen into negative territory while the developing countries have shown a mixed performance. India and China have experienced a TFP growth of 1 percent and 0.8 percent respectively while Brazil and Mexico have witnessed a fall of 0.4 percent and 0.9 percent respectively.

These trends are more problematic for the developing world than the advanced countries. After all, rising productivity, or output per worker, directly determines the improvements in the standard of living of a nation’s citizens. And, in absolute terms, the TFP level of advanced nations are almost five times higher than the emerging economies. So, low growth or stagnation of TFP can grossly undermine the ability of poorer nations to catch-up with their richer counterparts. As Paul Krugman aptly commented, “Productivity isn’t everything, but in the long run it is almost everything.”

However, it is almost inexplicable to experience such productivity trends in the face of the rapid technological advancements. Martin Wolff recently suggested that the stagnation of productivity in the developed world could probably be a lull before the storm. A similar productivity pause was seen in the US of 1920s when electricity was revolutionising lives. Soon after the lull, productivity levels shot up rapidly. If that is the case, the emerging economies have all the more reason to be concerned about rising cross-country disparities. A sudden acceleration in productivity growth of advanced nations, as suggested by Wolff, will make it even more difficult for poorer nations to catch-up and introduce extreme levels of cross-country inequality.

One of the reasons for the low productivity growth levels of developing nations was suggested by Diego Comin and Marti Ferrer of Dartmouth University in a 2013 paper. In a cross-country analysis, they have shown that even though these nations have been quick to adopt technologies from the industrialised nations, their penetration rates have been low. This has sustained the gap in productivity levels of the Western and non-Western world.

To make matters worse, the various channels of technology adoption are under threat these days. There are three broad channels for knowledge and technology flows between advanced and emerging economies: international trade, foreign direct investment, and cross-country research collaborations. Firms regularly gain access to technology through the process of reverse engineering after importing goods from abroad. Investing in other countries also results in a transfer of technology. Finally, location of research centres abroad to take advantage of cost differences can lead to knowledge flows between countries.

However, in a post-Trump world, as countries close up their economies these synergies can come to a nought. In such a scenario, the adoption of technologies could take a hit and further the productivity disparities between advanced and emerging economies. It is crucial that the rate of productivity growth in developing nations rebound as broad-based increases in standard of living are at stake.

The best way for these nations to climb up the ladder of prosperity would be to eliminate all structure impediments that are impeding the adoption and penetration of newer technologies. The popular fear of job losses due to higher automation has also been negated by a recent analysis by the Asian Development Bank. In an analysis of 12 developing Asian economies between 2005 and 2015, it was found that a rise in demand more than compensated for the job losses that resulted from automation. In particular, it was estimated that during this period about 134 million new jobs were created as opposed to a loss of 101 million jobs to technology. So, contrary to expectations, the adoption of newer technologies has induced higher productivity and economic growth in Asian economies.

In light of these facts, the NITI Aayog’s latest move to shift the policy focus on artificial intelligence (AI) to stimulate social and inclusive growth is a positive step. Such applications of digital technology can unleash higher levels of productivity gains and push the envelope on the delivery of public goods on a national scale. The real litmus test will depend on the execution of the policy, but for now it can be said that India has entered the AI playground at the perfect time.

The article was published with Business Standard on June 19, 2018.