Angus Deaton and lessons for India 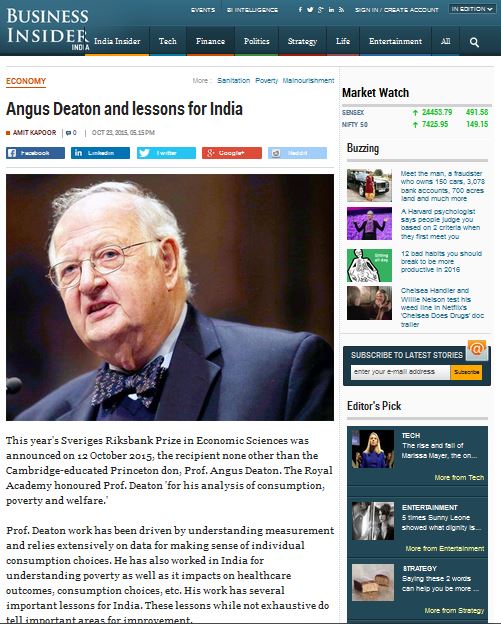 This year’s Sveriges Riksbank Prize in Economic Sciences was announced on 12 October 2015, the recipient none other than the Cambridge-educated Princeton don, Prof. Angus Deaton. The Royal Academy honoured Prof. Deaton ‘for his analysis of consumption, poverty and welfare.’

Prof. Deaton work has been driven by understanding measurement and relies extensively on data for making sense of individual consumption choices. He has also worked in India for understanding poverty as well as it impacts on healthcare outcomes, consumption choices, etc. His work has several important lessons for India. These lessons while not exhaustive do tell important areas for improvement.

The most important message that Prof. Deaton also mentioned in a recent interview was that there seems to be a statistical discrepancy in the data for India. It is because the household survey results do not reconcile with the fact that there seems to be an exceptional increase in income data coming from the national accounts. It seems to be a very valid contention since increases in income should lead to increases in consumption. The household data does not seem to have commensurate increases that one sees in the national accounts. In our experience even within the national accounts there seems to be a problem as the individual ‘state growth rates’ far exceed the growth rate for the country as a whole. It becomes particularly problematic as no government (either state or union government) would want a downward revision of GDP estimates. An independent inquiry is a must to understand these statistical discrepancies and make statistical systems more robust so that one can understand and track real changes better.

Second, the role of public services is very important be it roads, healthcare, education, or sanitation, and this should go hand in hand with increases in growth. India has had a particularly bad record on healthcare access and malnourishment, and it is important to pay attention to these areas. Over time, governments have not paid attention to public services that have resulted in the delayed betterment of outcomes. Though India has increased the life expectancy at birth to 64 years still, it will take a concerted effort on the part of governments to improve further. The malnourishment rates in India are still quite appalling and must be bettered for gains in productivity as well as better wellbeing. The life expectancy at birth and overall wellbeing that one witnesses in the developed countries are a result of political consensus as well as a focus on growth with public services.

Third, poverty is fundamentally about the lack of choices and it is important to know that it has gone down in India as well as in the world. By how much is relatively difficult to say in the Indian context due to data discrepancies but it has gone down. Another related issue with poverty is inequality. In itself inequality is not inherently bad but bad when people who become rich ‘burn down’ the pathways for others to become rich. In a recent Credit Suisse report, it was pointed out that the top 1 percent of Indians own 53 percent of India’s wealth. While the statistic looks stark that this wealth can be taxed and used for providing better public services to the poor shows that inequality in itself is not bad. The fact that that inequality is not being leveraged for the public good is bad.

Both the ‘left’ and the ‘right’ in India’s public discourse will gain by understanding Prof. Deaton’s work on the economic challenges facing India. It is because his work is not driven by economic ideology but rather by a sense of understanding reality through data and designing interventions to improve conditions for well-being and progress within societies.

Published with Business Insider on October 23, 2015.