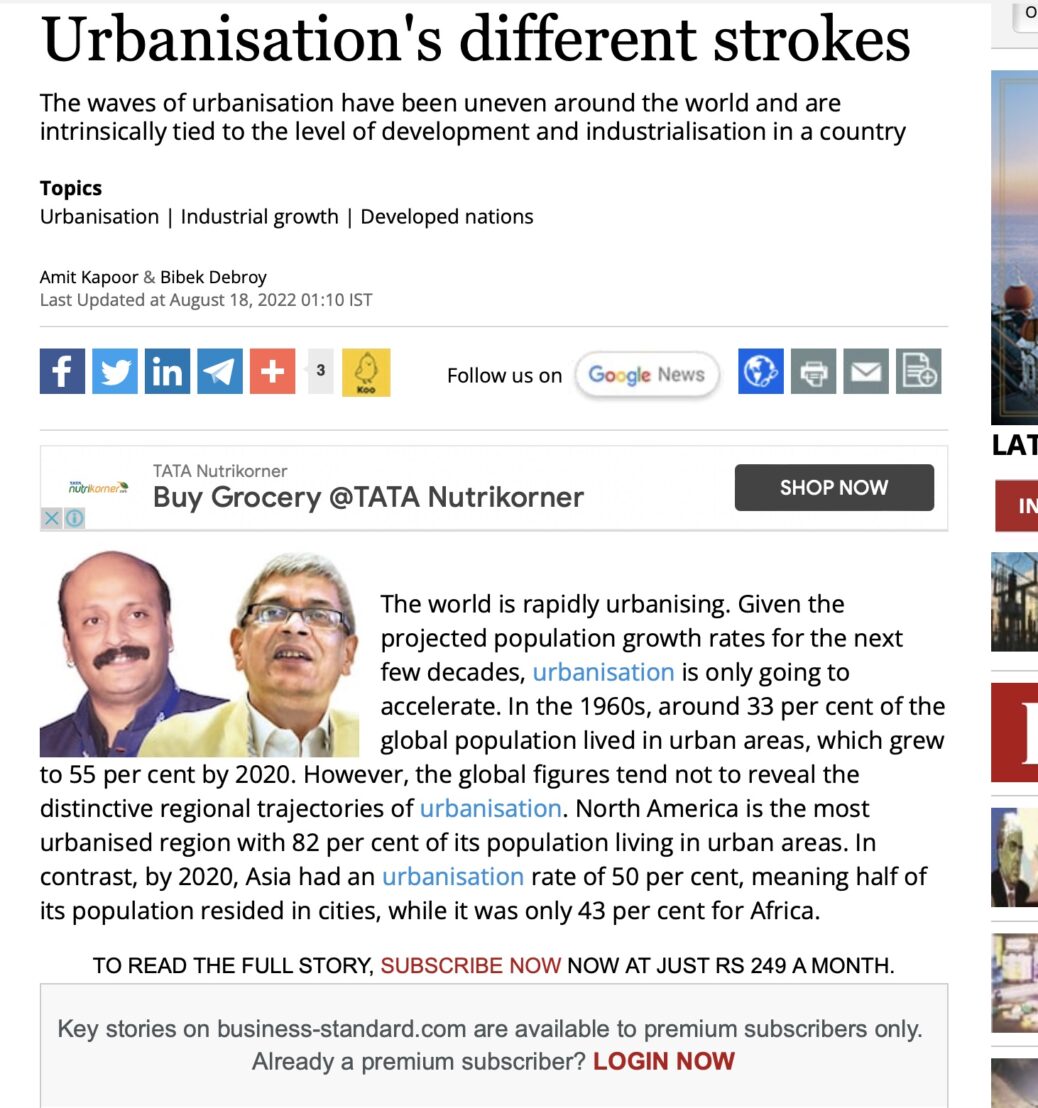 The world is rapidly urbanising, and with the projected population rates for the next few decades, this process of urbanisation is only going to register higher rates. In the 1960s, around 33% of the global population lived in urban areas, which grew to 55% by 2020. However, the global figures tend not to reveal the distinctive regional trajectories of urbanisation. North America is the most urbanised region as 82% of its population lives in urban areas. In contrast, by 2020, Asia had an urbanisation rate of 50%, meaning half of its population resides in cities, while only 43% of the African population lives in cities. These different trajectories have emerged so distinctively as, in the western world, the trend of urbanisation accelerated after the Industrial Revolution, which triggered the flow of people from rural to urban areas. However, urbanisation is more of a twentieth-century hallmark among non-western states. Additionally, if we compare the historical trends between North America, Asia and Africa, the disparity between the developed and developing regions becomes apparent. For instance, in 1950, the annual percentage of the population living in urban areas in North America was approximately 64%. For Asia, it was nearly 17.5% and 14% for Africa.

In the same way, variations in the pace of urbanisation are evident when we draw a comparison between more developed regions and less developed regions. According to the World Urbanisation Prospects: 2018 Revision (released by United Nations), in 1950, 29.8% of the population in more developed regions lived in cities. In comparison, only 20.3% of people in the less developed areas (excluding China) resided in cities. If we include China in the less developed regions, the number jumps to around 54%. In fact, in 1950, China accounted for nearly 11.8% of the urbanised population, with its Special Administrative Regions (Hong Kong and Macau)  having more than 80% of the people already living in cities. By 2020, China had an urban proportion of about 61%, with its Special Administrative Regions showing 100% urbanisation. The urbanisation ‘epoch’, to say so, occurred during the period of the ‘Great Leap Forward’ between 1958 and 1961 and later on post-1978 as China opened up.

Regional variations show us how some countries and regions have urbanised faster than others. The waves of urbanisation have been uneven around the world and are intrinsically tied to the level of development and industrialisation in a country. This then explains the presence of sub-regional and inter-regional disparities as well. For instance, among the Asian sub-regions, Central Asia accounted for the highest percentage of urban proportion (approx. 32.7%). By 2020, however, one can observe a relatively slower pace of urbanisation (only about 48%) in the Asian region. At the same time, Eastern Asia now has an urban proportion of nearly 64.8% (2020), but this region also includes more developed states like China and Japan. Closer to home in South Asia, 16% population was living in urban areas in 1950, which increased to about 36.6%. In 1950, the rate of urbanisation in India (17%) was more than the South Asian average and continued so throughout the 1970s.

There are several reasons for the variations, which range from different rates of natural population growth in rural and urban areas,  rural-to-urban migration, international migration, and the growth of urban settlements. Natural population growth and uneven distribution across regions are significant causes of the regional variations. Administrative changes like reclassification or changing the definition of urban also impacts the level of urbanisation and proportion of the urban population. The urbanisation rate reaches saturation at very high levels and typically slows down, which can be seen in the case of developed countries. Given that India, China and Nigeria are seen to be contributing at least 33% to the global urban population by 2050, it is imperative to closely watch the urbanisation trajectory of these developing states in the next few years. Moreover, economic change and spatial planning, which includes housing, infrastructure, and service delivery, are strongly related to the extent and pace of urbanisation as well as the underlying demographic dynamics. These variations, however, should not mask the fact that the global trajectory of urbanisation has been very encouraging, with almost 80% of global GDP being generated in cities only as per the World Bank’s feature on urban development.

The correlation between the transformation from a rural to an urban economy and an increase in the urban proportion is expected and evident, as in the case of Indonesia. This comes along with higher development, shared prosperity and welfare, as well as a rise in formal employment and labour productivity. At the same time, there cannot be a sole focus on triggering urbanisation but also on equipping our cities to be able to cater to the needs of a rising urban population. It is necessary to channel the trajectory of urbanisation so that the influx of people is not only focused on larger cities. Most Importantly, to narrow the rural-urban disparity and the disparity among cities and megacities, equitable development should be sought to avoid the concentration of population in only a few cities. Rather, smaller cities should be provided with an impetus to attract investment and opportunities, alongside increased investment in infrastructural development and a greater focus on ease of living for its people.

The article was published with Business Standard on August 18, 2022.