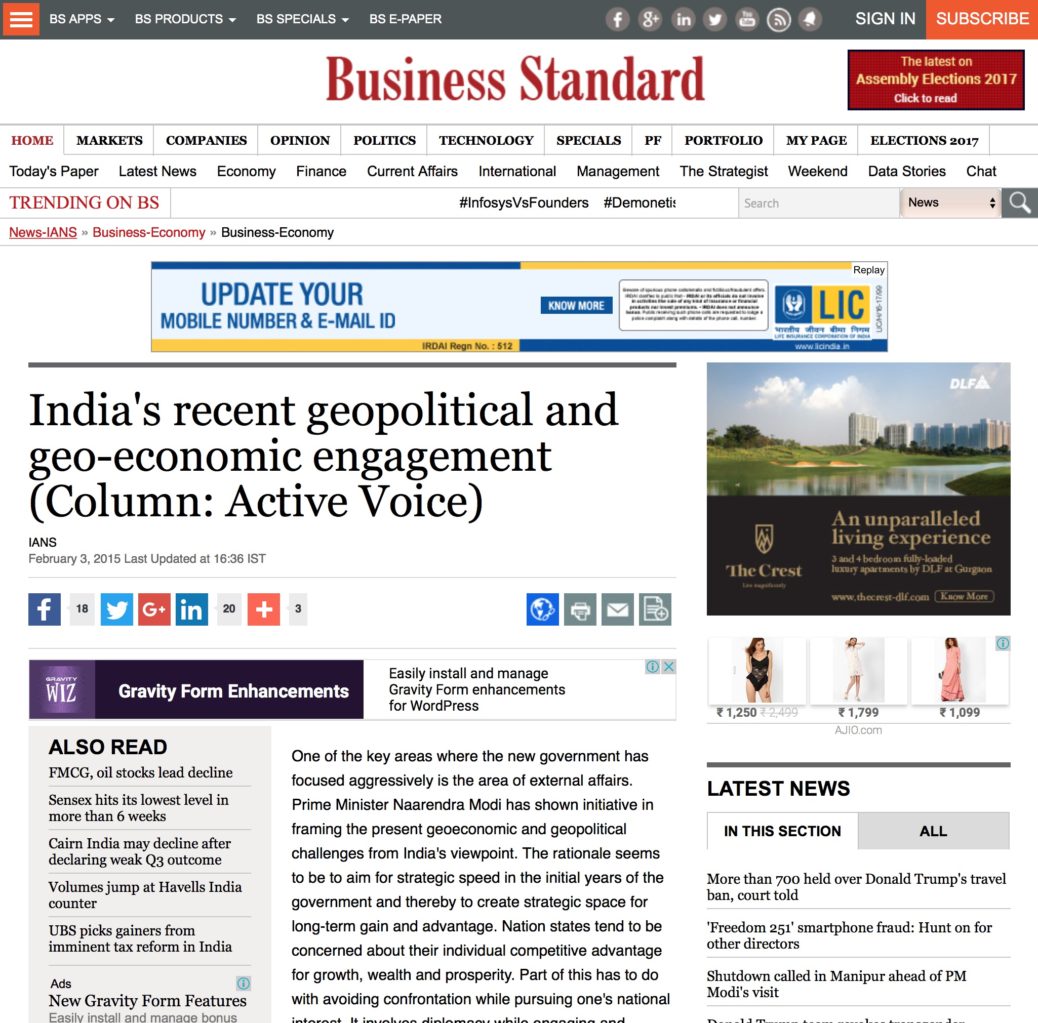 One of the key areas where the new government has focused aggressively is the area of external affairs. Prime Minister Naarendra Modi has shown initiative in framing the present geoeconomic and geopolitical challenges from India’s viewpoint. The rationale seems to be to aim for strategic speed in the initial years of the government and thereby to create strategic space for long-term gain and advantage. Nation states tend to be concerned about their individual competitive advantage for growth, wealth and prosperity. Part of this has to do with avoiding confrontation while pursuing one’s national interest. It involves diplomacy while engaging and collaborating with other nation states on issues of strategic and economic importance.

Over the past seven months, since Modi assumed office, his focus to a large extent has been on geoeconomic and geopolitical engagement to further India’s strategic interests. One cannot find fault with such an approach as it is imperative that India shows initiative for ensuring regional security and world engagement. The idea of Non-alignment – the overarching ideological framework propounded during the Nehru era – was replaced by a sort of Re-alignment, especially after the fall of the Soviet Union. Realignment’ took greater root after India set on its path of liberalization, privatization and globalization (LPG). It has now been replaced by Multi-alignment – a framework for engaging with various nation states conducting vigorous foreign policy initiatives aimed at securing strategic and economic objectives. It is being witnessed with India wanting to engage with China, US and Russia almost simultaneously since Modi took over.

Multi-alignment in the past gained much traction with the engagement of US and the Indo-US relationship being described by then prime minister Atal Bihari Vajpayee as one involving ‘natural allies’. During UPA-1, a significant breakthrough was made by prime minister Manmohan Singh in the area of Civil Nuclear Agreement with the US, aimed at ending the nuclear apartheid that India had been facing since the late 1960’s. The vigour that was seen lacking in UPA2 on the foreign policy front is now being reignited under PM Modi’s direct engagement in foreign affairs. There are four broad points about India’s recent geoeconomic and geopolitical engagement that merit attention:

First, India is looking at its neighbourhood for greater participation. It was illustrated in the step initially to call the heads of all the SAARC (South Asian Association for Regional Cooperation) countries aimed at building trust and achieving strategic and economic objectives. The initial trips to Bhutan and Nepal were meant to not only further India’s strategic interests but also gain their confidence for positive engagement and ensuring peace and prosperity within the region. The visits were also seen as being proactive in the immediate neighborhood and in providing an alternative to the Chinese hegemony over the region.

Second, Modi has stated conversion of the ‘Look East’ policy to ‘Act East’ policy. It was spelt out during the East Asia Summit and includes engagement with Myanmar over the highway project linking the two countries along with Thailand, asking ASEAN nations to Make in India and the like. The coming days will show how various measures under the ‘Act East’ policy are implemented in practice and what results do these measures yield for greater stability and order in Asia. Similarly, during the Australian (for the G-20 Summit) and Fijian visits, Modi addressed their parliaments as the first Indian prime minister to do so. There was renewed hope of active engagement on issues like black money, nuclear energy, information technology, defense training and the like during these visits. All these steps reflect interest among the international community for a stronger and rising India.

Third, a distinct departure from the previous governments has been in focusing on deliverables during visits rather than just talks/photo ops/steps ahead. It was seen during Modi’s state visit to Japan where when his Japanese counterpart Shinzo Abe, pledged approximately $35 billion for boosting India’s ailing infrastructure. Similarly, Chinese President Xi Jinping, during his recent visit to India, pledged investments of $20 billion. Also, in the recently concluded Republic Day visit of US President Barack Obama he pledged $4 billion ($2 billion of which was for renewable energy) for India. It is touted to be a great step for Indo-US cooperation and engagement (though Sino-US is trade is five times Indo-US trade, US sees India as having high potential).

Fourth, Modi wants to make the states as magnets for investment that is expected over the coming years with renewed foreign engagement. This way, Modi hopes to channelize foreign investments that are pledged across different states in India. The international engagement is increasingly being used for economic development of states. It is also a radical departure for the states as being considered partners rather than passive recipients of union government grants and financial devolution. The focus is on bettering performance and competition between states within India for taking advantage of investments from foreign countries/companies.

One needs to understand the recent geoeconomic and geopolitical engagement of India within the world order, at the moment not from a normative but a realistic perspective. Henry Kissinger in his most recent book titled ‘World Order’ mentions ‘four world orders’ dominant in history. These have appropriately been described as, European, Islamic, Chinese and American. Can India envision a fifth one?

Published with Business Standard on February 03, 2015.