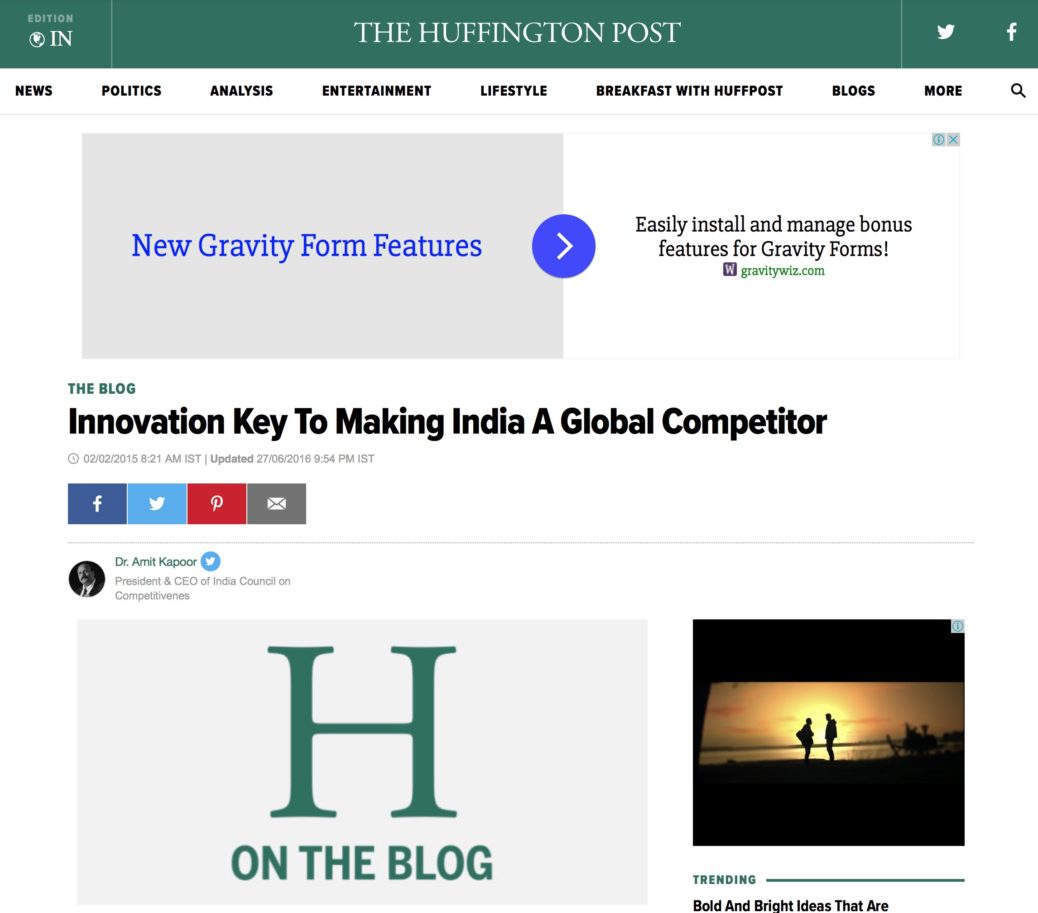 While various static and dynamic factors determine the growth of a nation, innovation remains a key driver of its competitiveness. An innovation-driven economy not only increases industrial efficiency but also ensures long-term sustainability of growth and competitiveness of the nation. This piece delves into the relationship between innovation and competitiveness in the global context and what this means for India.

As the global environment continues to be competitive, the role of a nation in producing an environment conducive to growth and progress becomes increasingly important. Thus there is a growing need for countries to increase their productivity and clearly define the distinct advantages they present. Often the notion of a competitive nation can be unclear though the World Economic Forum in its annualGlobal Competitiveness Report defines the competitiveness of a nation as “a set of institutions, policies, and factors that determine the level of productivity of a country.”

Productivity can be seen as essential to a nation’s competitiveness – greater the productivity, higher the prosperity of the nation. Naturally, an increase in productivity is achieved through technological innovation, efficiency measures and a highly educated workforce. The United States is the quintessential example of a nation that has through consistent development and focus on innovation, attained its stature as one of the most prosperous nations in the world.

The Indian government recognises the relevance of this relationship and has taken measures in recent years to encourage innovation in the country. However, even though India is currently in its “Decade of Innovation”, the global indices still show a dismal situation. India ranks a low 76th out of 146 countries on the Global Innovation Index 2014, below many small and developing economies. Furthermore, one can witness a steady decline in India’s competitiveness rankings on the Annual Global Competitiveness Report released by the World Economic Forum.

This contradiction is due to a number of factors. First, there is still a lack of strong emphasis on promoting research & development, which is a core part of innovation. As can be seen in the figure below, the total number of patents filed by India, though higher than its BRIC counterparts Brazil and Russia, is considerably lower than that of innovative giants such as the USA and Japan. While it is a positive sign to see the high CAGR growth rate of patents granted to India in the past decade, we still has a long way to go. Secondly, although numerous efforts have been made by the government to boost innovation and entrepreneurship in India, there is a lack of institutional framework for the effective implementation of such reforms. For instance, though multiple initiatives have been taken to provide funding for startups, the legal framework to actually start a business is highly arduous and time-consuming. According to the World Bank, India ranks 158th on “ease of starting a business” out of 189 economies. These rankings are very discouraging and mean that many bright ideas don’t see the light of day.

Last and perhaps the most pivotal is the attitude of the new generation towards education and work. The education system applauds academic excellence through rote learning and inadvertently discourages creativity. Having a huge workforce is not enough if emphasis is not put on its qualitative development. Estimates show that only 4-6% graduates in India are skilled enough to get employed. Universities give recognition to graduates with the highest salaries on campus as opposed to encouraging new ideas. India is home to a tremendous number of engineers and MBAs, but most are motivated to seek jobs rather than take the riskier and more challenging path to entrepreneurship.

Despite these hindrances, there is strong hope for India and the road to achieve an innovation-driven tomorrow. Internationally, India continues to be a reputed innovative hub and a formidable source of human capital. The Mangalyaan mission is one of the glorious examples showcasing the true potential of India. What India requires is the united effort of the government and corporations to boost innovation that could act as a catalyst in bringing about this change.

The article is co-authored by Vrinda Gupta, an MMS candidate at Duke University’s Fuqua School of Business.