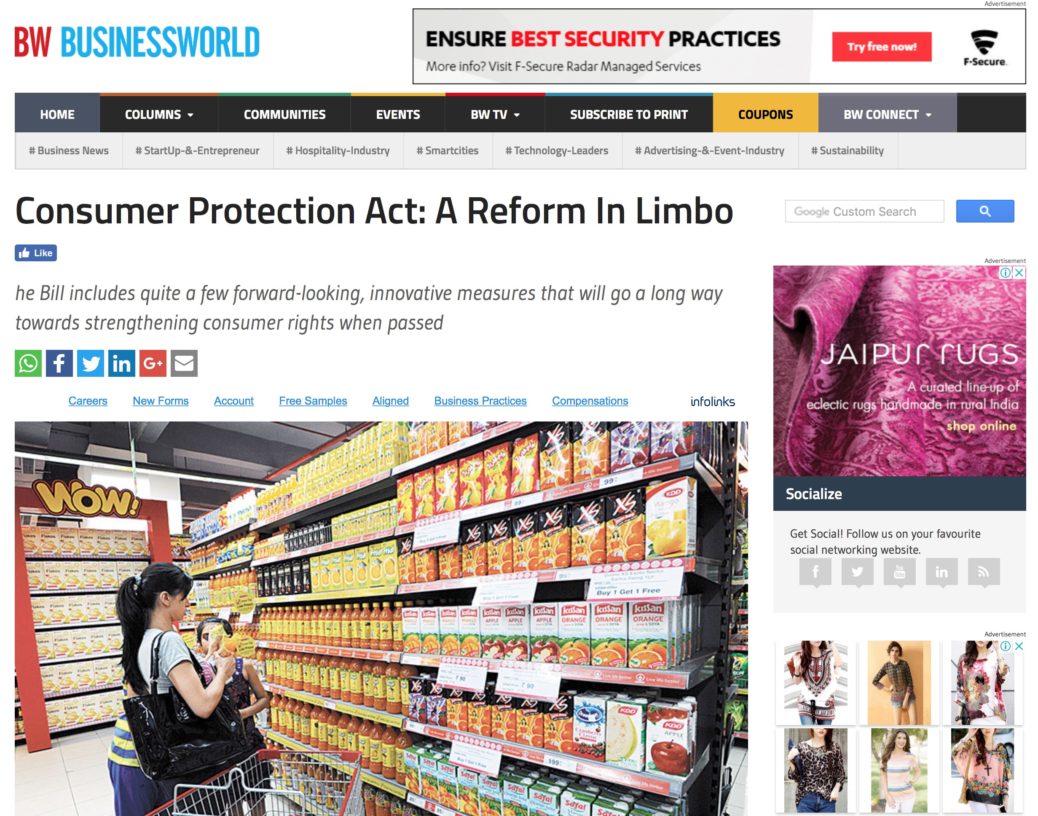 The Bill includes quite a few forward-looking, innovative measures that will go a long way towards strengthening consumer rights when passed

In 2012, India’s leading squash champion and Padma Shri recipient, Dipika Pallikal was unable to swipe her debit card abroad despite having sufficient funds in her account. The concerned bank cited the incident beyond its jurisdiction. A month later the same bank returned a cheque of 1 lakh, which was a gift from the Union Sports Ministry and Dipika had deposited into her account. It later cited technical error as the possible reason. Dipika filed an official complaint against the bank. Two years later, the Consumers Disputes Redressal Forum directed the bank to pay her a compensation of Rs 5 lakh for the ordeal and an additional Rs 5000 as a cost for deficiency in service.

This outcome was a result of the Consumer Protection Act, 1986, which set up dispute resolution forums at district, state and national levels to enforce customer rights and provide a mechanism for redressal of complaints. However, the Act had come into force at a time when the country’s economic landscape and the level of consumer awareness were at an infancy stage. Since then the Indian markets and the consumers have undergone fast-paced, dynamic changes.

First, globalisation has resulted in a convergence of markets all across the world. Therefore, the existence of a single ideal consumer of the 1980s confined within a domestic market has become increasingly rare. Consumer relationships with businesses have become more complex over time since the opening up of the Indian economy in 1991. Therefore, the laws to protect them have to be commensurately adjusted.

Second, since the 1980s new marketplaces also became popular that demanded a different approach towards consumer protection. With the coming of the internet age, online transaction systems gained acceptance giving rise to the phenomenon of e-marketplaces. However, although these platforms provide for quality speedy services by encouraging competition on a larger scale than traditional markets, there has been a lack of clarity around the after sales services like refunds and returns. This has led to a rising level of consumer complaints in recent times. These platforms have also left the consumers vulnerable to new forms of unfair trade practices. The present Consumer Protection Act fails to identify these upcoming market domains and furnish better settlement procedures.

Therefore, with changing market trends and branching consumption patterns, there is an urgent need to revise existing regulations and formulate a restructured mechanism that can be aligned with the modern and digital nature of markets. The Consumer Protection Bill 2015 attempts to do exactly the same thing. It defines ‘e-commerce’ services and empowers the Centre to make rules for preventing unfair trade practices in online trading. Unlike the previous Act, which forced a consumer to initiate legal action against a seller only in the place where the transaction had taken place, the Bill allows consumers to file complaints in consumer courts that have jurisdiction over their place of residence.

Apart from coming up to date with the times, the Bill also makes a few major crucial propositions. It suggests the creation of a Central Consumer Protection Authority (CCPA) along the lines of the Federal Trade Commission (FTC) of the US. The body will have the power to suo moto launch investigations, conduct searches, recall goods and services that are found unsafe and hazardous, summon delinquent market agents and order discontinuation of practices that are found to be unfair to consumers. The establishment of such an entity will be a landmark step towards upgrading the implementation mechanism at par with global standards.

Another major area of improvement is the attempt of the Bill to address the issue of lengthy delays in dispute resolution proceedings, which was a major criticism of the 1986 Act. The Bill proposes time-bound settlement of consumer disputes i.e., 3 months from the date of receipt of notice by opposite party and 5 months for cases which involve testing product samples. It also proposes the establishment of Consumer Mediation Cells to help reduce the burden on redressal forums. These measures can substantially help in reducing the backlog of cases and prevent further stalling of cases.

The Bill includes quite a few forward-looking, innovative measures that will go a long way towards strengthening consumer rights when passed. As an emerging economy, it is necessary for India to ensure that its consumer’s interests are protected since high level of consumer confidence in an economy allows them to experiment and support new businesses, thus boosting competition and encouraging growth.

It is also in the best interests of the Modi government to see the Bill through after it has been in a limbo for the last two years. After passing schemes like GST, RERA and Ujjwala, all of which carry substantial consumer benefits, implementing stronger consumer protection laws will cement the work done in favour of improving business practices over the last three years. One only hopes the government’s appetite for reforms hasn’t died out yet.

The article was published with Business World on November 29, 2017.