BRICS but not yet a Building 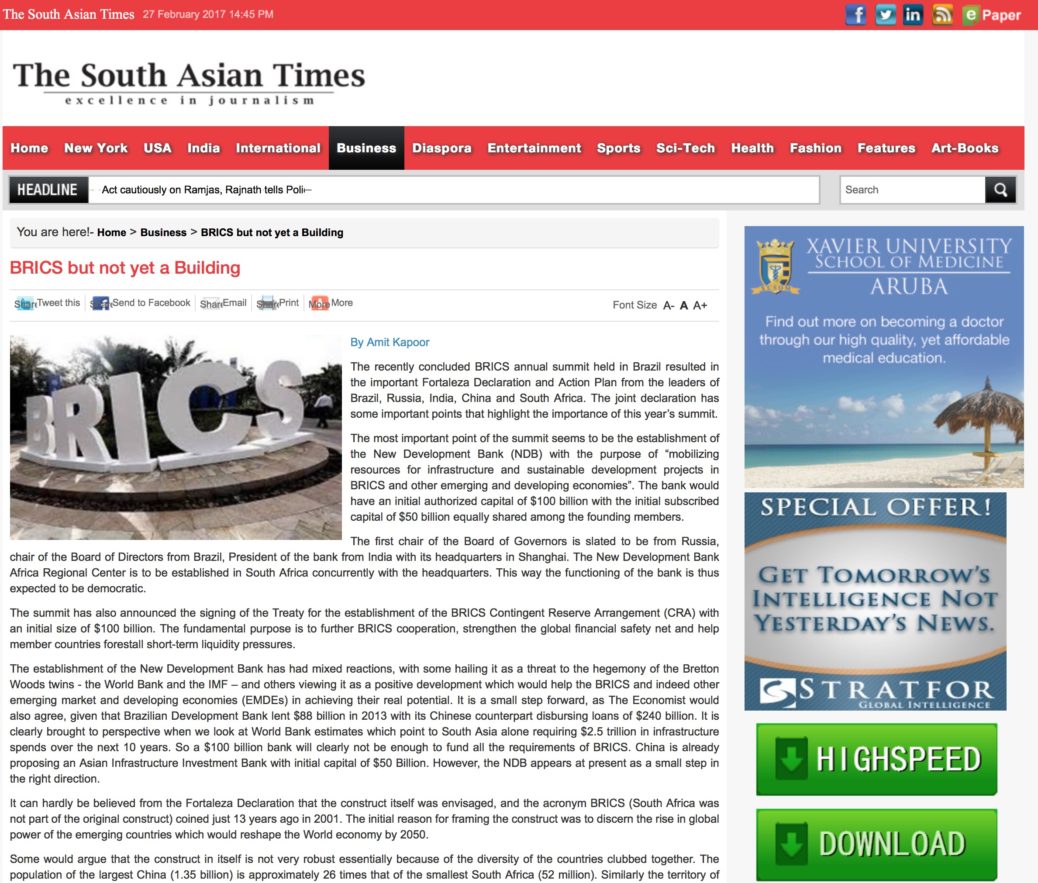 The most important point of the summit seems to be the establishment of the New Development Bank (NDB) with the purpose of ‘mobilizing resources for infrastructure and sustainable development projects in BRICS and other emerging and developing economies.‘ The bank would have an initial authorized capital of US$ 100 billion with the initial subscribed capital of US$ 50 billion, equally shared among founding members.

The first chair of the Board of Governors is slated to be from Russia, chair of the Board of Directors from Brazil, President of the Bank from India with its headquarters in Shanghai. The New Development Bank Africa Regional Center is to be established in South Africa concurrently with the headquarters. This way the functioning of the bank is thus expected to be democratic.

The summit has also announced the signing of the Treaty for the establishment of the BRICS Contingent Reserve Arrangement (CRA) with an initial size of US$ 100 billion. The fundamental purpose is to further BRICS cooperation, strengthen the global financial safety net and help member countries forestall short-term liquidity pressures.

The establishment of the New Development Bank (NDB) has had mixed reactions with some hailing it as a threat to the hegemony of the Bretton Woods twins namely the World Bank and the IMF while others viewing it as a positive development which would help the BRICS and indeed other emerging market and developing economies (EMDEs) in achieving their real potential. It is a small step forward, as The Economist would also agree, given that Brazilian BNDES lent $88 Billion in 2013 with the Chinese counterpart disbursing loans to the tune of $240 Billion. It is clearly brought to perspective when we look at World Bank estimates which point to South Asia alone requiring $2.5 trillion in infrastructure spends over the next 10 years. So a 100 Billion USD Bank will clearly not be enough to fund all the requirements of the BRICS. China is already proposing building an Asian Infrastructure Investment Bank with initial capital of USD 50 Billion. However, the NDB appears at present as a small step in the right direction.

It can hardly be believed from the Fortaleza declaration in 2014 that the construct itself was envisaged, and the acronym BRIC’s (South Africa was not part of the original construct) coined just 13 years ago in 2001. The initial reason for framing the construct was to discern the rise in global power of the emerging countries which would reshape the world economy by 2050.

The essential argument is that BRICS share nothing apart from economic growth rates. Be it their economic geography (three of them are neighbors in Asia while the other two lie in two different continents namely South Africa in Africa and Brazil in South America), their language (different countries have different languages), Culture (diverse cultures) or even their political system (3 are democracies namely Brazil, India and South Africa while 2 are authoritarian regimes, i.e., Russia and China in some form or the other). It is all indeed very true except that post the coinage of the acronym these countries have  somehow tried to share and cooperate in matters which are urgent and necessary for these BRICS economies. They can at times be seen as uncomfortable brethren who are compelled to work together.

The next summit is slated to be in the city of Ufa in Russia in 2015. At the operational level, some things will certainly take shape by then. However, will the BRICS emerge as a stronger construct over a long time frame (till 2050) or will it wither away as an economic construct? That only time can tell. As of now it surely is “Dreaming With BRICS” with the establishment of the NDB.