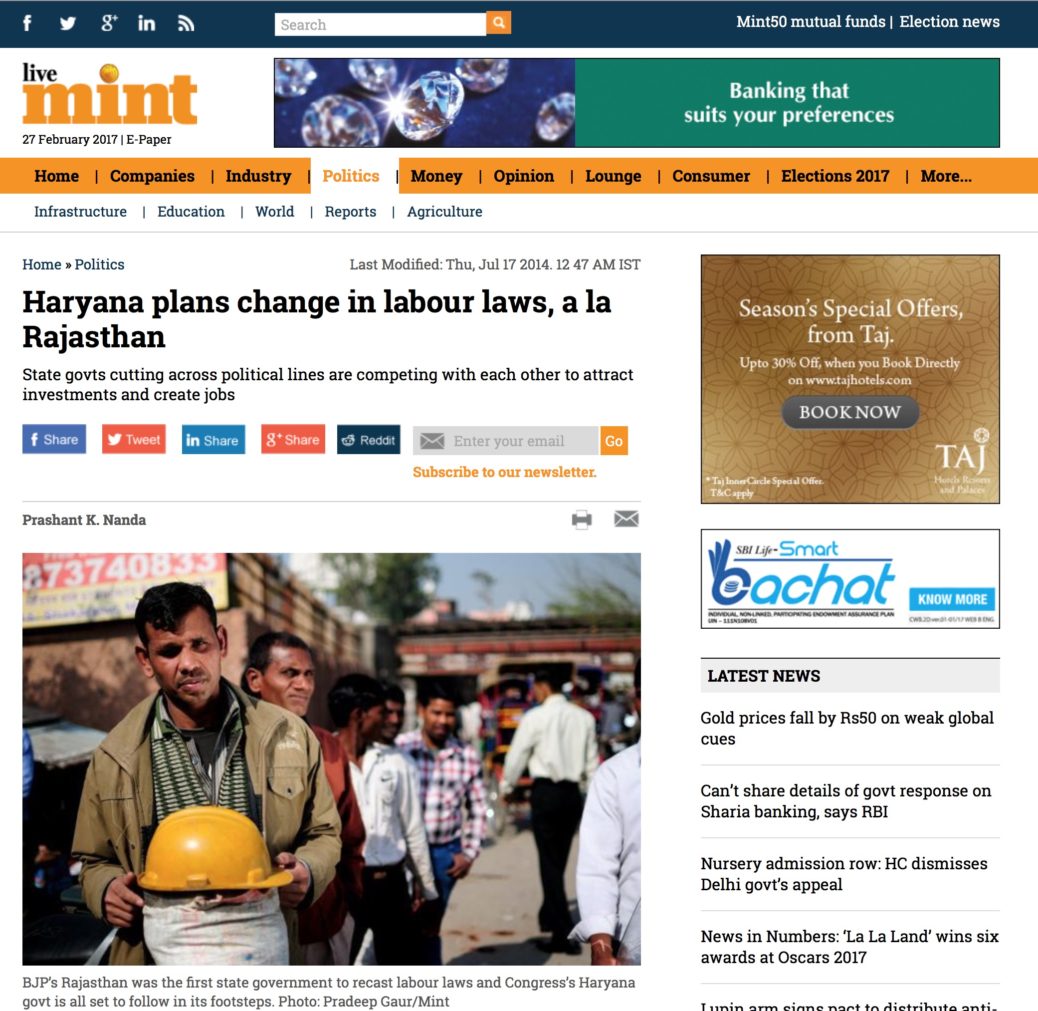 New Delhi: Taking its cue from Rajasthan, Haryana is set to reform a clutch of labour laws, as state governments cutting across political lines compete with each other to attract investments and create more jobs.

“We are taking it to the cabinet and in the next two-three days the chief minister will formally announce it,” Sharma said in a phone interview.

Rajasthan, ruled by the Bharatiya Janata Party (BJP), was the first state government to recast labour laws in the first week of June when chief minister Vasundhara Raje’s cabinet cleared amendments to the Industrial Disputes Act, the Factories Act and the Contract Labour Act.

These laws have been identified as a constraint to expansion of investment in the labour-intensive manufacturing sector. Rajasthan approved amendments to the Apprentices Act and Boilers Act. All these amendments will now be approved by the state assembly before being sent to the centre for approval.

The BJP government that came to power at the centre after the April-May general elections has emphasised the need for changes to labour laws. Minister of state for labour and employment Vishnu Deo Sai told the Rajya Sabha on Wednesday that the government is considering amending a slew of labour laws, including the Minimum Wages Act 1948 and the Factories Act 1948, PTI reported.

Archaic labour laws are considered to be a hindrance in the creation of jobs in a country where at least 93% of workers in the labour market are in the so-called informal sector that is not taxed or monitored by government agencies.

India has 43 labour laws, created by the central government but largely implemented by the states.

“The issue is how to create an environment where companies can be more productive. States have to provide the right atmosphere to create values…to attract investment and create jobs,” said Amit Kapoor, president and chief executive of India Council on Competitiveness.

To be sure, unions have been fretful of labour law reforms that they fear may undermine the interests of workers.

The timing of the state government’s move is interesting, coming as it does ahead of assembly elections due in Haryana later this year, experts said.

“Some negative perceptions have seeped in about the state due to several industrial disputes in the last few years. Haryana is a smart state and they would like to better the investment sentiment to attract industries and create more jobs in the state. Any move to reform and bring clarity in the labour laws is a welcome step,” said Rituparna Chakraborty, senior vice-president of TeamLease Services Pvt. Ltd, a staffing and training company.

“You cannot fox people by mere lip service and what people want is concrete steps on job creation,” she said in the context of whether this could benefit the ruling party in an election year.

As part of the Industrial Disputes Act, Rajasthan’s amendment will allow companies to retrench up to 300 employees without seeking government permission. At present, it is restricted to 100.

It has also, for the first time, introduced a time limit of three years for raising industrial disputes. The modifications also make it tougher to register labour unions. The Rajasthan cabinet has approved amendments to the Contract Labour Act, which, once passed, will be applicable to companies with more than 50 workers instead of the current 20 workers, Mint reported on 9 June.

A central labour ministry official in New Delhi said that there were certainly some flaws in the labour laws because of which a vast portion of India’s labour force remains in the informal sector more than 60 years after independence.

States reforming labour laws as per their requirements is positive, but “they have to maintain a balance”, the official said on condition of anonymity.

“You have to create industry-friendly atmosphere to better investment and create jobs. Otherwise where will the jobs come from?” the official asked.

Labour unions said Rajasthan had offered other states a model to follow that is largely anti-worker.

“Haryana is already industry-friendly and if they go for so-called reforms it will create further labour tension. The state has seen big disputes in the last few years including several rounds of disputes in Maruti Suzuki,” said D.L. Sachdeva, national secretary of All India Trade Union Congress.

“In an election year, they may talk about job creation but with few months left for the present government, it could be counter-productive as well,” said Sachdeva added.

The incident was followed by a month-long lockout. Prior to the violence, the workers had gone on strike to press for a wage hike and other perks. Later, Maruti suspended at least 550 workers allegedly involved in the violence.