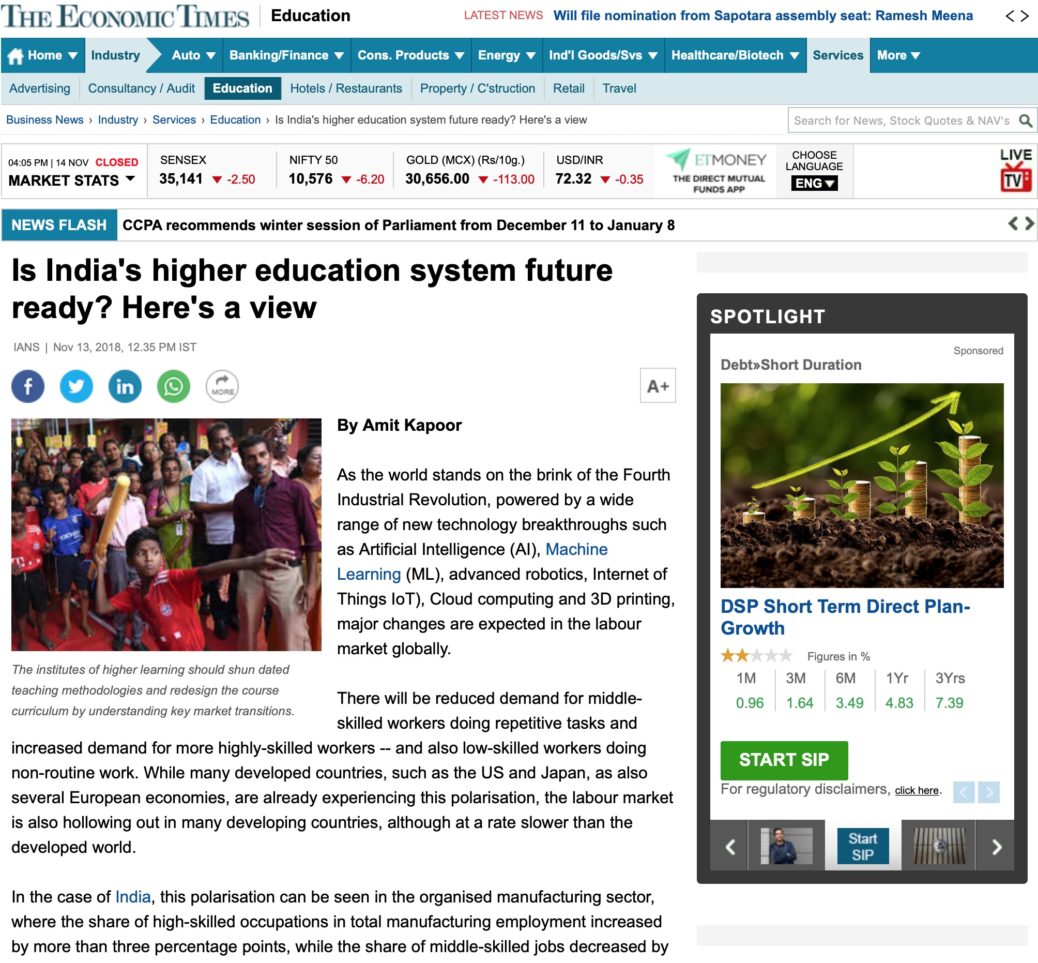 As the world stands on the brink of the Fourth Industrial Revolution, powered by a wide range of new technology breakthroughs, such as Artificial Intelligence, machine learning, advanced robotics, Internet of Things, cloud computing and 3D printing, the revolution is expected to have major changes in the labor market globally, by reducing the demand for the middle skilled workers doing repetitive tasks, and increasing the demand for more highly skilled workers and also low skilled workers doing non-routine work. While many developed countries, such as the United States, Japan and several European economies are already experiencing this labor market polarization, labor market is also hollowing out in many developing countries, although at a rate slower than the developed world (World Development Report, 2016).

In case of India, this labor market polarization can be seen in the organized manufacturing sector, where the share of high skilled occupations in total manufacturing employment increased by more than 3 percentage points, while the share of middle skilled jobs decreased by 6.3 percentage points over the period from 1993-94 to 2011-12 (Vashisht P, 2017). Looking at the impact of technological progress on various manufacturing industries in India, the capital -intensive industries, such as the automobile manufacturing industry, have a greater probability of adopting the advanced automation and robotic technologies, compared to the labor-intensive manufacturing industries such as textile, apparel, leather, and footwear, and paper manufacturers. Further, in the services sector, particularly in the IT sector, e-commerce, banking and financial services and health care services, there is a huge potential for automation technologies, which would increase the demand for the skilled workers and reduce the demand for the middle skilled workers.

Addressing these labor market challenges induced by technological advancements, requires reforms in the higher education system in India. The institutes of higher learning should contend with the dated teaching methodologies, and redesign the course curriculum by understanding the key market transitions amidst the technological advancements. This would enable the country to bring out a workforce which could be placed in the positions demanded by the companies in the digital era and thus bridge the skill gap in the labor market.

However, looking at the current state of higher education in India, one can perceive that it is not just the quality of the higher education system which needs to be improved, there is also much to be done in terms of the number of students enrolled in the institutes of higher learning and heterogeneity existing in access to higher education, based on socio economic statuses, gender and also regions. The Gross Enrollment Ratio (GER) in tertiary education in India is 26.9 percent, which is lower than that of China (48.4 percent), Indonesia (27.9 percent), and Philippines (35.3 percent), among others (World Bank, 2017). Further, the GER in India for the male population is 26.3 percent and for females it is 25.4 percent. The GER also varies across the different social groups, for the Scheduled Castes it is 21.8 percent, and for the Scheduled Tribes it is 15.9 percent (All India Survey for Higher Education (AISHE), 2017)

There are also wide variations in the number of colleges for higher education across different states in India, with lowest number of 7 colleges in Bihar for every 0.1 million of eligible population to 51 in Telangana and Karnataka. The top 8 states in terms of highest number of colleges in India are Uttar Pradesh, Maharashtra, Karnataka, Rajasthan, Andhra Pradesh, Tamil Nadu, Gujarat, and Madhya Pradesh, which have 28 or more colleges per 0.1 million of the population. The disparity in the distribution of the colleges is also seen across different districts in these states, with top 50 districts having about 32.6 percent of the colleges.

Given that the Indian system of higher education faces multiple challenges of low gross enrollment in its colleges and universities, with predominance of students settling on undergraduate studies, along with various socio-economic inequalities existing in access to higher learning, it is imperative for the country to address these issues. Further, emphasis must be given on increasing the number of students who pass out of the colleges/universities, along with increasing enrollment numbers.

The technology induced skill gap which the Indian economy is facing across its different sectors is bound to increase with the given higher education system. The change has to be brought from outside the existing constructs. Improvement in the teaching methodology from the traditional lecture courses, accreditation of online courses, along with redesigning the course curriculum that is industry relevant, are some of the ways the technology led changes in the labor market can be dealt with.

The article was published with Economic Times , Canvast.co.in and Business Standard on November 13, 2018.