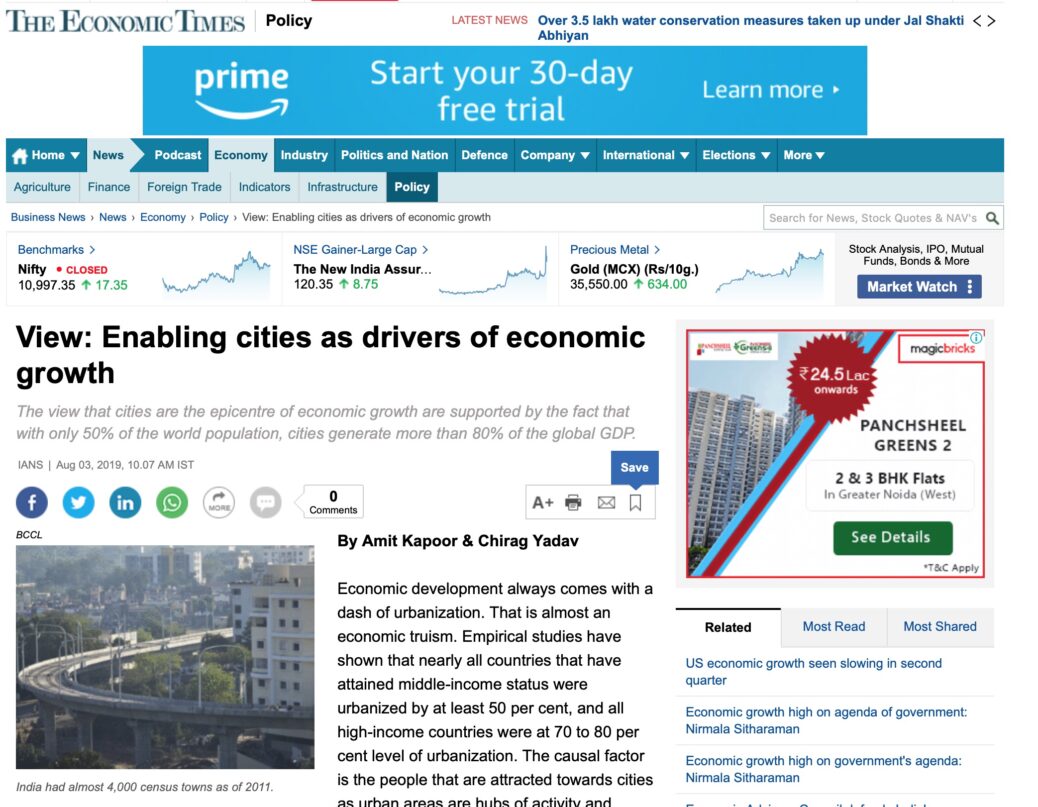 Economic development always comes with a dash of urbanization. That is almost an economic truism. Empirical studies have shown that nearly all countries that have attained middle-income status were urbanized by at least 50 percent, and all high-income countries were at 70 to 80 percent level of urbanization. The causal factor is the people that are attracted towards cities as urban areas are hubs of activity and growth. The concentration of talent in urban areas drives productivity and spurs job creation and growth. This explains the strong linkage between urbanisation and growth of economies as a whole.

The view that cities are the epicentre of economic growth are supported by the fact that with only 50 percent of the world population, cities generate more than 80 percent of the global Gross Domestic Product (GDP). As a result, the composition of cities is such that they are home to a greater number of young and working-age population relative to rural areas, which makes these regions critical for capturing the demographic dividend. Thus, cities in the developing world should be the focus of growth strategy due to their economic size, population composition, and innovative edge.

So, the path to higher growth for an economy like India should be through its urban areas. It must be noted, however, that India has had a curious trend in urbanisation. As per the 2011 Census, 31 percent of India was urbanised. This is projected to be at 34 percent by the World Bank currently. By contrast, about 55 percent of the world has urbanised on an average. Indian urbanisation trends have been slow with an annual growth rate of 2.76 percent between 2001 and 2011. In fact, the rate of urbanisation in the first decade of the new millennium has been slower than most of the second half of the previous century when urbanisation grew in excess of 3 percent annually until the 1990s.

These figures show that India is not urbanising at a growing pace as is often argued. Also, in what the World Bank has termed “messy”, the physical space occupied by Indian cities is growing much faster than the population growth in these areas. Satellite analysis of night lights in South Asian cities shows that urban areas are expanding at the rate that was slightly more than 5 percent annually while the population growth in them has been a little less than 2.5 percent per year. This curious trend can be a reflection of the growth of slums and sprawl in the periphery of cities. Thus, it can be argued that urbanisation in India and the manner in which it is taking place has immense scope for improvement.

On the other hand, as more and more Indians migrate to urban areas with aspirations of a better quality of life and opportunities, it becomes increasingly challenging to meet those demands. Growing urbanisation brings with it a severe stress on the city infrastructure, basic services, housing, land use and environment. The inability to meet these challenges constrains the potential of cities to gain from the agglomeration economies as productivity is severely hampered. A range of policy issues need to be addressed to remedy these regional issues facing India as they can unlock immense growth potential for the country.

First, at times there is little clarity on the responsible body of governance for urban areas. The Census differentiates between statutory towns and census towns. While the latter are governed by municipalities, census towns, which are areas that have a minimum population of 5000, at least three-fourths of its male population engaged in non-agricultural activities, and have a population density of at least 400 per square kilometre, are classified as urban areas but are considered rural for all other matters, especially governance. This results in a chaotic development of urbanisation. India had almost 4,000 census towns as of 2011.

Second, India still lacks devolution of power to local areas despite having decades of constitutional ability to do so. The 74th Constitutional Amendment of 1992 gave the state governments power to transfer a set of 18 municipal functions to urban local governments as they have greater knowledge of service delivery at the local level. However, most of the states have refrained from devolving all of these powers to local governments. Town planning, for instance, still rests with a lot of states. It is problematic for urban local bodies to be accountable to the people but not having the power to deliver services to them.

Finally, to add to the constraints of local governments, the introduction of GST has limited their source of fiscal revenue as taxes like octroi and local body tax were subsumed within it. This imposed a heavy strain on the functioning of local bodies as they had relied heavily on revenue from these sources. The GST revenue, thus, should have been shared with local bodies as well. This has not been done; severely limiting the ability of urban local bodies to implement development plans and provide services. India needs to address these issues facing its urban economies to access the full potential that they present for being drivers of economic growth.

The article was published with Economic Times and newsd.inon August 3, 2019.