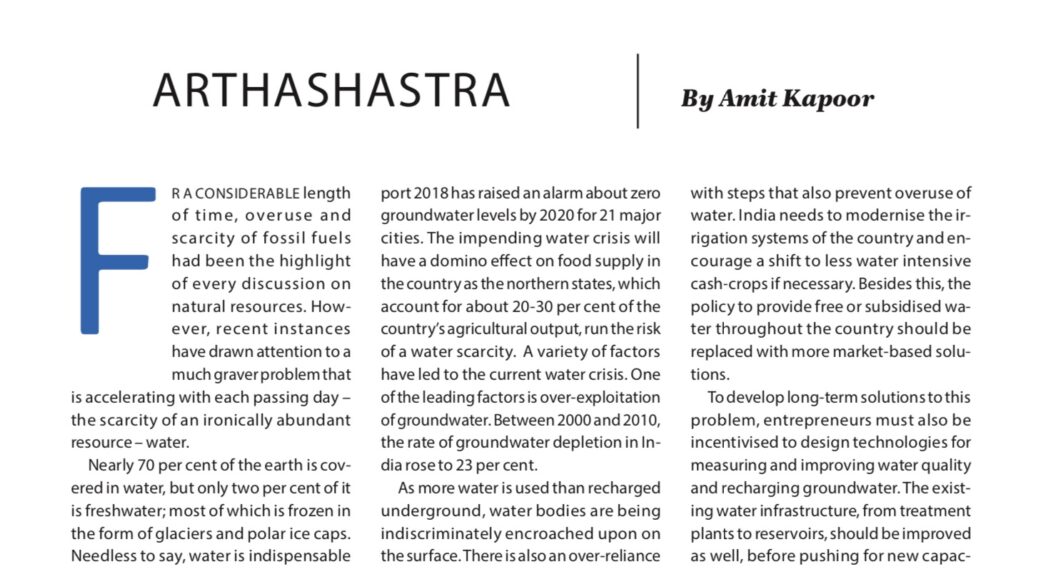 For a considerable length of time, overuse and scarcity of fossil fuels had been the highlight of every discussion on natural resources. However, recent instances have drawn attention to a much graver problem that is accelerating with each passing day – the scarcity of an ironically abundant resource – water.

Nearly 70 per cent of the earth is covered in water, but only two per cent of it is freshwater; most of which is frozen in the form of glaciers and polar ice caps. Needless to say, water is indispensable for living, and its shortage is a threat to life on earth.

Realising that access to safe water is a basic human right, Goal 6 of the Sustainable Development Goals (SDGs) focusses on ensuring clean water, availability of sanitation and sustainable management of water for all by the year 2030. Meeting this goal is especially a challenge for India as it has over 1.2 billion people to support with just four per cent of the world’s water resources at its disposal.

Furthermore, India has been one of the lowest rank holders (120 among 122 countries) on WaterAid’s Index on Water Quality because 70 per cent of its water is contaminated. NITI Aayog’s Composite Water Management Index (CWMI) Report  2018 has raised an alarm about zero groundwater levels by 2020 for 21 major cities. The impending water crisis will have a domino effect on food supply in the country as the northern states, which account for about 20-30 per cent of the country’s agricultural output, run the risk of water scarcity.  A variety of factors have led to the current water crisis. One of the leading factors is over-exploitation of groundwater. Between 2000 and 2010, the rate of groundwater depletion in India rose to 23 per cent.

As more water is used than recharged underground, water bodies are being indiscriminately encroached upon on the surface. There is also an over-reliance on the monsoons for their replenishment and poor water management systems only add to the predicament.

Understanding the gravity of the situation, the government has taken positive steps to address the crisis. A Jal Shakti Ministry has been formed with emphasis on measures such as rainwater harvesting and watershed development. Notable steps have also been taken by some states. The Delhi government, for instance, has initiated water harvesting plans on the Yamuna floodplains and installed rainwater harvesting structures in all government buildings.

Such efforts need to be supplemented with steps that also prevent overuse of water. India needs to modernise the irrigation systems of the country and encourage a shift to less water intensive cash-crops if necessary. Besides this, the policy to provide free or subsidised water throughout the country should be replaced with more market-based solutions.

To develop long-term solutions to this problem, entrepreneurs must also be incentivised to design technologies for measuring and improving water quality and recharging groundwater. The existing water infrastructure, from treatment plants to reservoirs, should be improved as well, before pushing for new capacity-building projects, as the latter have longer gestation periods.  Public-private partnerships can be explored for these efforts, where the public sector must retain ownership of the assets and set tariffs to ensure that these resources remain affordable for all.

Finally, changing behaviour patterns of citizens is of utmost importance, as they are the end users. Sensitising citizens to the dire consequences of indiscriminate use of this crucial resource can prevent a situation where most of our cities are parched. Hence, unified efforts in the right direction may resolve the issue at hand.

The article was published with Business World in the issue dated 20th July – 2nd August, 2019.