Bad news for Modi? Bleak prospects for Indian economy for next few quarters 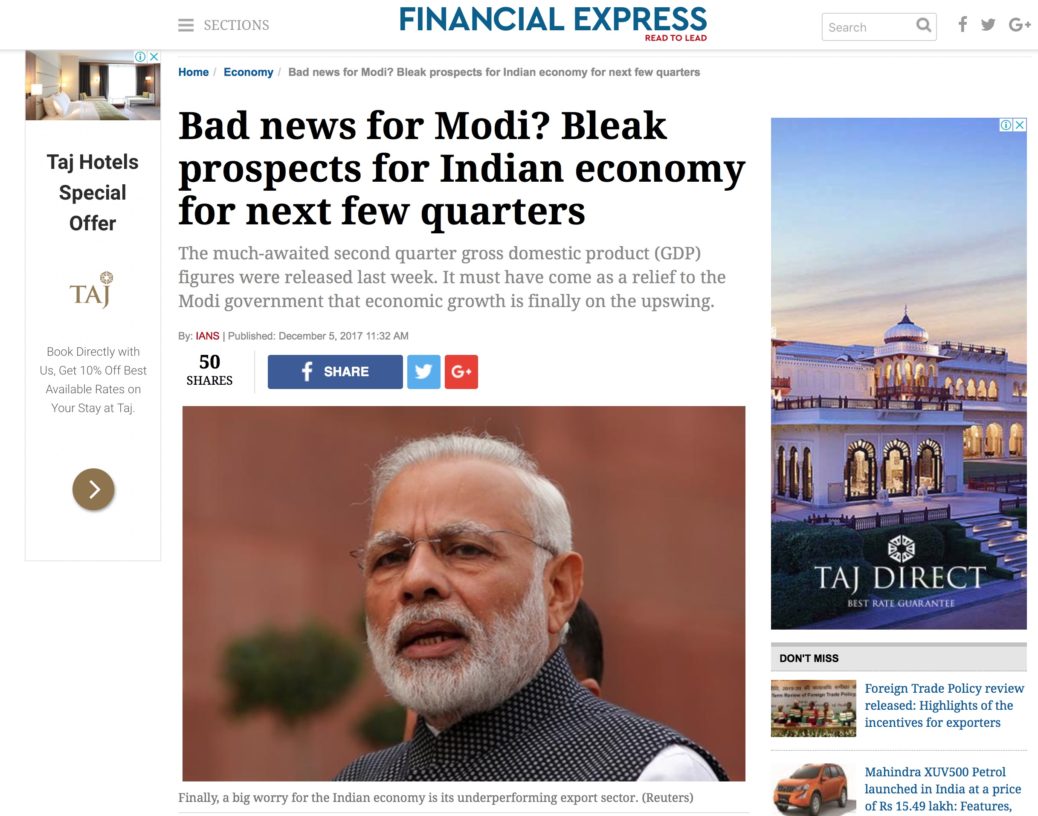 Bad news for Modi? Bleak prospects for Indian economy for next few quarters

The much-awaited second quarter gross domestic product (GDP) figures were released last week. It must have come as a relief to the Modi government that economic growth is finally on the upswing. After five successive quarters of decline, growth inched up to 6.3 percent in the July-September quarter after hitting rock bottom at 5.7 percent in the previous quarter. There was a mild sentiment of euphoria over this turnaround, but it is instructive to point out that even the worst quarter after the 2008 recession took India to a low of 6.9 percent. Clearly, we’ve left the last decade far behind.

Some might say that the comparison is unfair since the global economy was conducive to such levels of growth at the time. However, the impact of domestic factors in the growth decline over the previous five quarters cannot be refuted as OECD estimates put global growth to be the fastest since 2011. Also, demonetisation and GST were not the only two culprits of the slowdown in growth since it had begun much earlier. Private investment sentiments had already been muted due to a rising stock of bad loans.

Nevertheless, the adverse impact of all these factors seem to be nearing their end. A rise in GDP growth rate points to the fact that the impact of demonetisation and GST are finally wearing off and over the last few months the government has taken some crucial steps to deal with the problem of bad loans. But are we out of the woods yet?

The same data that was released last week does not paint a promising picture. First, the growth rebound was brought about largely on account of the manufacturing sector. It grew by 7 percent as compared to a paltry 1.2 percent during the April-June quarter. However, curiously this figure is much higher than the 2.2 percent year-on-year growth of manufacturing in the same quarter based on the index of industrial production (IIP) data. The gap can only be explained by differences in methodology.

The IIP measures the change in production volumes as compared to the previous year while the GDP calculation measures the value addition taking place in the economy. Therefore, if production volumes remain same over the year, IIP data will show no growth, but in the same scenario if the price of inputs fall, GDP will grow positively. This is exactly how the recent growth in manufacturing has come about. Production volumes have not expanded as commensurately as production value. This is not a positive sign for a developing economy like India where demand for jobs is ever-expanding. Growth will not matter much if real production does not take place.

Second, a factor of growing concern for the economy is the problem of fiscal deficit. The day GDP figures came out, stock markets reacted negatively due to the slippage on the fiscal front. Private investments have not been seen any substantial revival since the last quarter and, in fact, gross fixed capital formation as a percentage of GDP has actually declined. The only thing keeping the economy running was increased government spending, but even that has been stretched beyond its limits. Barely more than half a year has passed, and the government has already spent 96 percent of its annual target. Since the government has made its intentions clear of sticking to the fiscal target, future growth prospects do not look promising and will solely depend on a revival of private sentiments.

Finally, a big worry for the Indian economy is its underperforming export sector. The growth in exports took place at merely 1.2 percent in the last quarter, which is hard to explain at a time when the global economies are at one of their strongest phases of growth in a long time. It is absolutely crucial to address this issue since, as repeatedly pointed out by Swaminathan S Anklesaria, no country in history has managed to grow at 7 percent on a sustained basis without an export growth of at least 15 percent. India’s subdued export performance is puzzling, and it needs to figure out what is inhibiting its growth. The recently-implemented GST framework can be a possible cog in the wheel. Addressing these policy bottlenecks can bring exports to the upward growth path.

All these factors combined with the fact that private investment continues to remain weak point to bleak future prospects for the Indian economy. This will remain true for the next few quarters. Hopefully, when the complete impact of the recent string of reforms with GST, Real Estate Act and Bankruptcy Code start to kick in, a revival in private sentiments will take place and drive manufacturing and exports in the process. Until then the only ray of hope resides with the favourable external sector as a lucrative source of demand.

The article was published with Economic Times and Financial Express on December 5, 2017