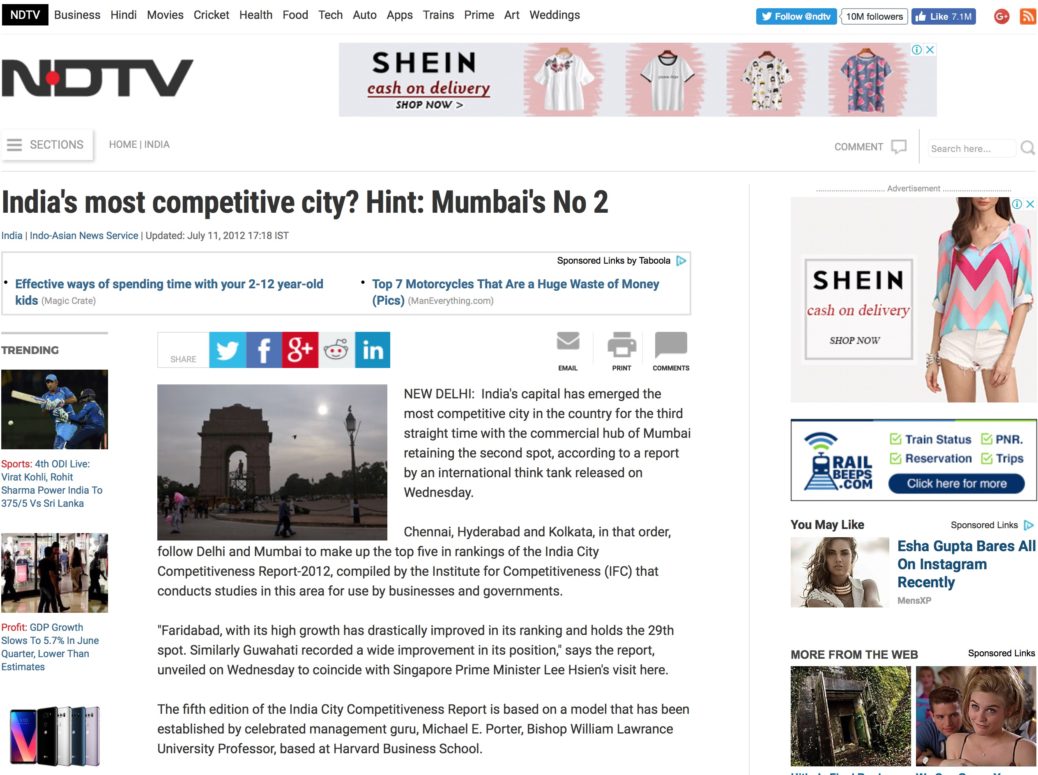 India’s capital has emerged the most competitive city in the country for the third straight time with the commercial hub of Mumbai retaining the second spot, according to a report by an international think tank released on Wednesday.

Chennai, Hyderabad and Kolkata, in that order, follow Delhi and Mumbai to make up the top five in rankings of the India City Competitiveness Report-2012, compiled by the Institute for Competitiveness (IFC) that conducts studies in this area for use by businesses and governments.

“Faridabad, with its high growth has drastically improved in its ranking and holds the 29th spot. Similarly Guwahati recorded a wide improvement in its position,” says the report, unveiled on Wednesday to coincide with Singapore Prime Minister Lee Hsien’s visit here.

The fifth edition of the India City Competitiveness Report is based on a model that has been established by celebrated management guru, Michael E. Porter, Bishop William Lawrance University Professor, based at Harvard Business School.

Regarding New Delhi, the report says the city has managed to demonstrate a phenomenal growth over a period of time by balancing demand and development in equal measure. The two areas it is found lagging in are administrative and institutional support.

The report also says that Noida, another city with close proximity to New Delhi, is now giving tough competition to the metros, even as Pune and Ahmedabad, which have very high potential, slipped a few notches, but remained in top 10 slots.

Among the smaller cities, while Coimbatore, Mysore, Madurai and Guwahati climbed up, Surat, Lucknow, Agra and Allahabad dropped in their rankings.

“Undoubtedly, Indian cities have the required potential to make their mark across the globe. This is clearly evident with in urbanization rate of these cities and by the trend of their growth,” says the report.

“However, it is required that Indian cities work on their strong areas and use it constructively to attract people from different genres. They should build a brand of their own and not follow some other global city.”

Porter’s model is founded on four pillars — the factor conditions, demand conditions, context for strategy and rivalry, and the quality of supporting and related industries. These are further divided into 12 sub-pillars to give information on 50 top cities.

“Cities are drivers of any economy. Their growth will enhance the growth of states and eventually that of the country. In the past few years, they have risen from their age-old shells and proving their potential on the global front,” says IFC chair Amit Kapoor.

Here’s the ranking of top 10 cities and their score: