How are we faring on Inequality? 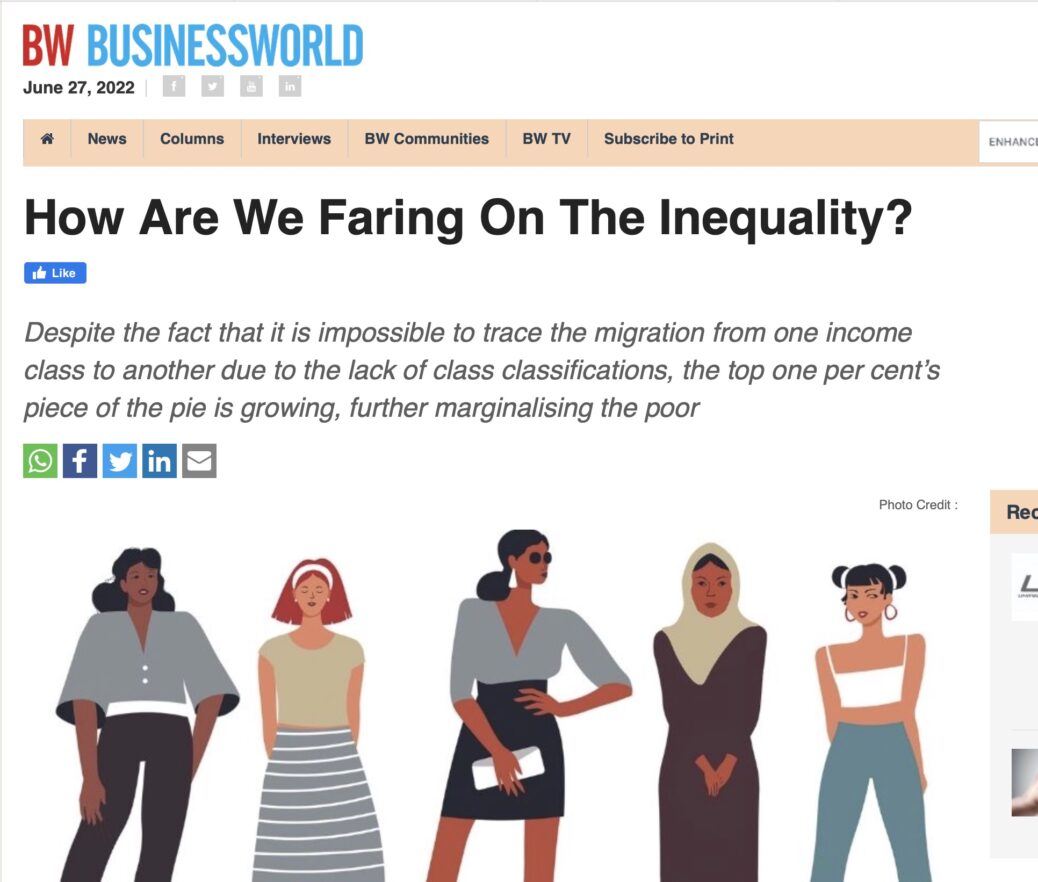 Multidimensional inequality aims to assess the cause and nature of inequalities, arguing that deprivation of one kind leaves a household deprived in various other ways. Such a framework rests both on measuring inequities and examining the resultant vulnerabilities to formulate comprehensive solutions. In order to truly grasp the ecosystem of inequalities thus formed, it is essential to look at the relationship between factors like income, labour, education, health and access to necessities required for sustenance. Deprivations in these sectors give rise to systemic inequalities where the capabilities and liberties of an individual are severely restricted. For instance, income and consumption are intricately tied in a manner that income flows determine the purchasing capacity of a household. Similarly, it impacts the household’s access to healthcare and proper education, thereby impacting their social condition and mobility in society. Therefore, this vicious cycle produces intergenerational vulnerabilities that influence a household’s upward mobility.

In India, a myriad of inequalities operates that are intersectional in nature. These socio-economic inequalities are regional, spatial, class and identity-based that influence the distribution and accessibility of resources. To then envisage a solution to inequality would mean to promote an equitable distribution of all these resources and opportunities. Additionally, creating a secure social protection infrastructure provides safety nets to the deprived households with a larger goal of making them resilient to sudden socio-economic shocks. A multidimensional framework for inequality thus targets structural solutions to lessen the impact and depth of inequality on households. Economic variables such as income and labour and socio-economic variables such as health, education, and living conditions are highlighted because when these variables are combined, they improve the standard of living. It has been observed that there is a link between income, health, and education, with lower earnings or loss of money leading to inaccessibility and unaffordability of health and education services.

While economic disparity is not the only factor that leads to poverty, it does provide a vivid picture of inequality and inequity in everyday life. According to India’s Periodic Labour Force Survey for the years 2017-18, 2018-19, and 2019-20, the top 10% earn roughly the same as the bottom 64%. One-third of all money is earned by the richest ten percent of the population. Basic needs become luxuries, with resources being unattainable as a result. The income profiles have revealed a significant pay disparity between men and women, highlighting gender-based disparities in the labour market that further marginalise women and limit their participation rate. Several government sources, including the 4th and 5th rounds of the NFHS and UDISE+, have shown that India has performed well on several indicators such as better sanitation, home electricity, and clean cooking fuel. Affordability and accessibility in the health and education sectors are also top priorities in a multifaceted approach that focuses on facilitating structural changes in inequality.

Despite the fact that it is impossible to trace the migration from one income class to another due to the lack of class classifications, the Top 1%’s piece of the pie is growing, further marginalising the poor. Low incomes must be considered in the light of multidimensional deprivations in this setting. Similarly, positive changes in the labour market, such as the increase in the working-age population, have generated a huge opportunity to use the demographic dividend to boost the country’s productivity. This potential, however, is contingent on essential interventions such as the creation of new jobs, the integration of the informal and formal sectors, and the empowerment of women in the labour market to boost their participation rates.

The article was published with Business World on May 30, 2022