Increasing the pace of India’s urbanisation 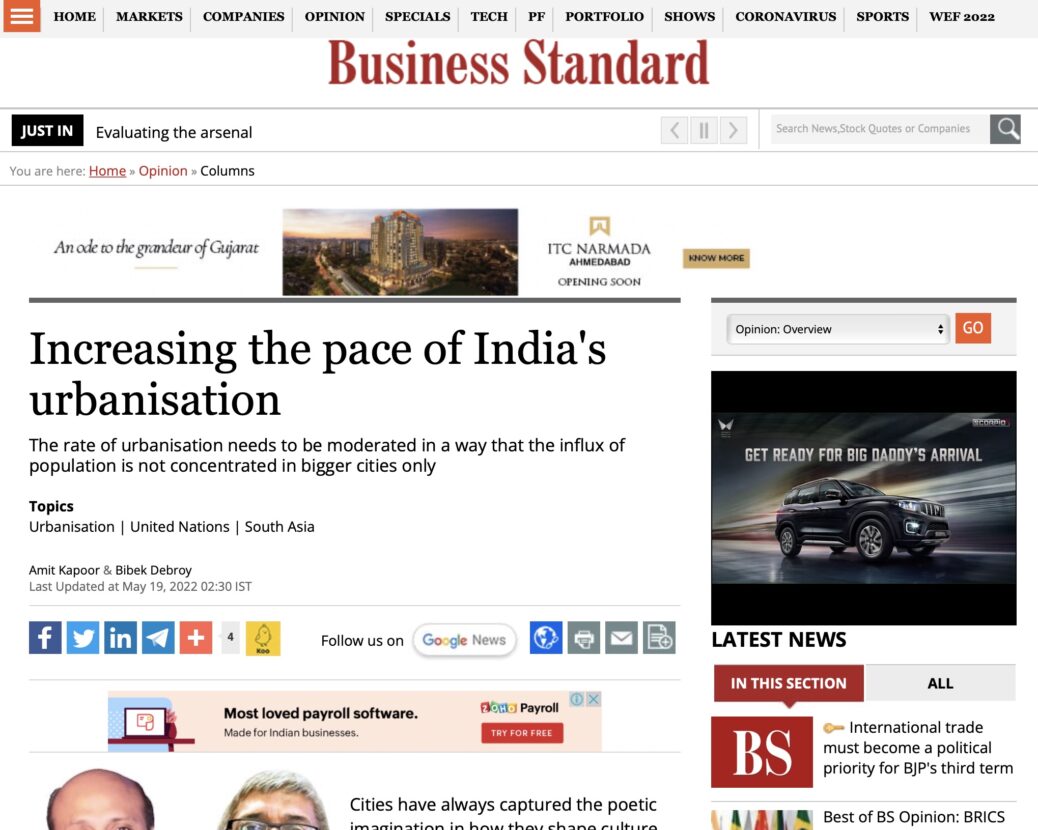 Cities have always captured the poetic imagination in how they shape culture and give impetus to the realisation of dreams and ambitions for people who come from the countryside. A city is a breathing entity – it is ever-growing and evolving. As it is said, a city is its people. It influences the aesthetics of its people, its architecture and its overall functioning. Beyond this poetic transfiguration of cities, there lie the overall developmental advantages that cities, and the process of urbanisation have to offer. By 2003, more people were living in cities than in villages globally.

It is clear that India is far behind in terms of the rate of urbanisation and far below the global average. The rate of urbanisation globally lies at 56.15% in 2020, while India’s urbanisation rate is 34.92%. Despite recognising the positive correlation between urbanisation and economic growth, India’s problem does not lie in its unwillingness to foster urbanisation. Instead, the roots of a sluggish rate of urbanisation in the country become apparent when seen in a historical context. ‘Cities’ as a scope of the study is a relatively new field as India has primarily been seen as a country that resides in its villages. This is particularly true for the phase during colonisation and a few years right after independence. However, If one is to trace the rate of urbanisation historically, from the 1960s onwards, for instance, one finds that in 1960 the rate of urbanisation globally was at 33.61%. For India, this number was 17.94%. The ‘urban question’ was missing from the discourse of development as industrial development, regional integration, and economic growth became priorities in the post-independence years. This, however, is not the case today, with governments realising the indispensability of cities as the drivers of economic growth. The 20th and 21st centuries witnessed India’s rapid and sustained urban growth. In fact, globally, the late 20th century saw rapid urbanisation, especially among the newly decolonised developing countries from Africa, Latin America and Asia. According to the World Urbanisation Prospects by United Nations, urbanisation in Asia was close to 50% by 2018. By 2020, it was projected that Asia will see a rate of urbanisation of around 51.1%, increasing to 52.3% by 2022. India continues to be below the Asian average as it is projected to be about 35% of its population living in urban areas by 2022. The South Asian (sub-region) projection is at 37.6%.

Amidst this, India’s rate of urbanisation grew at a consistent pace with an average increase of 0.5-1 percentage point each year. While urbanisation is not the only determining factor of annual growth, it is evident that the degree of urbanisation compliments growth and progress. Between 2011 and 2020, as per the percentage of the projected population living in urban areas provided by the Ministry of Health and Family Welfare, we find that Union Territories like Chandigarh (from 97.2% in 2011 to 99.63% in 2020) and Delhi (97.5% to 99.23%) have the highest percentage of population residing in urban areas. At the same time, the largest states (by area and population) have the least percentage of projected population living in cities. Rajasthan has 26.19% of the population projected to live in cities by 2020. Similarly, Madhya Pradesh has 28.66% and Uttar Pradesh with 23.59%. When correlated with the annual growth rate of these states between 2011 and 2020, we see Rajasthan has a CAGR in the given period of 4.35%, Uttar Pradesh of 4.55% and Madhya Pradesh of 6.28% over the last decade.

The lessons in the merits of urbanisation go beyond the positive push towards the growth of the country. Apart from the rise of agglomeration economies, the formation of industrial clusters, and the increase in competitiveness among and within each state, urbanisation offers solutions to reduce income inequality and poverty. It enhances jobs and incomes as more talent is attracted to urban conglomerates. With talent comes innovative solutions and a larger share of each individual in the prosperity of the country. India’s rate of urbanisation has been consistent but modest, and with Asia being closely watched as the rising giant, it becomes imperative to ask whether India will have a huge role to play in it or not. Optimistically, given India’s demographic weight and advantages, it is assumed that India will be closely watched and a rising power in itself, however, there is a need to hasten the pace of urbanisation in the country. At the same time, the rate of urbanisation needs to be moderated in a way that the influx of population is not concentrated in bigger cities only. This is particularly important from the point of growth and investment potential as well, with small cities lying on the periphery of the major industrial cities that drive progress. Shared goals of prosperity in tandem with urban growth will only be achieved when backward cities and towns are given attention in terms of development and enhancing investment potentiality.

The article was published with Business Standard on May 19, 2022.