The State of Inequality in India 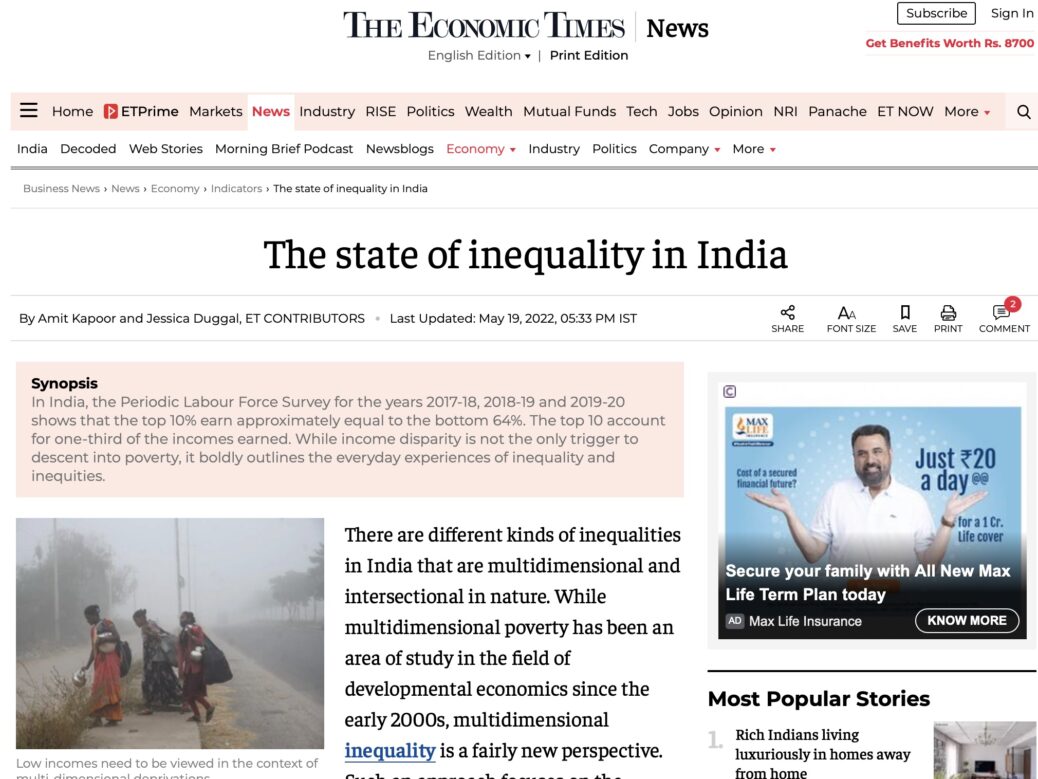 There are different kinds of inequalities in India that are multidimensional and intersectional in nature. While multidimensional poverty has been an area of study in the field of developmental economics since the early 2000s,  multidimensional inequality is a fairly new perspective. Such an approach focuses on the interrelationship between different variables like income, labour, education, health and household conditions in order to emphasise on the degree of deprivation. The interrelationship is such that lack of one kind leads to the household becoming deprived in other areas as well. This deprivation has both social and economic roots that reinforce oppressive structures that limit an individual’s (and by extension, the whole society) capabilities and liberties. Economic factors like loss of job, informalisation of work that takes away worker benefits, low incomes and having no assets or wealth transcend into the social lives by restricting their mobility and trapping the households in a vicious circle of dearth and inequities.

It is challenging to arrive at a singular definition of a deprived household or vulnerability, but we can assume that a household devoid of essential means of survival or not having the purchasing capacity to access life-saving or life-nurturing services can be called a deprived household. More important, the idea of multidimensional inequality, beyond a methodological intervention, proposes structural solutions to inequality. These solutions range from the inclusion of deprived households in the labour market so that the sources and opportunities of growth do not evade them to enhancing social security.

Economic variables like income and labour and socio-economic variables like health, education, and household conditions are highlighted as together these variables enhance the standard of living. It is observed that the correlation between income, health and education is such that lower incomes or loss of income leads to inaccessibility and unaffordability of services in the sectors of health and education. In India, the Periodic Labour Force Survey for the years 2017-18, 2018-19 and 2019-20 shows that the Top 10% earn approximately equal to the bottom 64%. The top 10 account for one-third of the incomes earned. While income disparity is not the only trigger to descent into poverty, it boldly outlines the everyday experiences of inequality and inequities. Basic needs become luxuries, spilling over in the form of resources becoming inaccessible. The income profiles have highlighted a vast pay gap between men and women, calling attention to gender-based inequities in the labour market that further marginalise women and reduce their labour force participation rate. Even though it is difficult to trace the movement from one income class to another due to the absence of class definitions, the share held by the Top 1% is only increasing, thereby further marginalising the poor. In this context, low incomes need to be viewed in the context of multi-dimensional deprivations. Similarly, the positive changes in the labour market, like the expansion of the working-age population, have created a massive potential for exploiting the demographic dividend to increase the country’s economic productivity. However, this potential rests on critical interventions like creating new jobs, integrating the informal sector with the formal sector, and empowering the female labour force to increase their participation rate. The latter also rests on the shift in the mindset of the society to view women as the secondary “bread-earners”.

Affordability and accessibility of health and education sectors are also a prime concern under a multidimensional ambit, where the emphasis is on enabling structural changes in the nature of inequality. Data from several government sources like the 4th and 5th round of NFHS as well as UDISE+ has revealed that India has performed well over several indicators like improved sanitation facilities, electrification of households and clean fuel for cooking. These developments can be credited to various social protection schemes and initiatives – most notable of which remains JAM Trinity – Jan Dhan Aadhar and Mobile – that focuses on deeper technological integration in the society. This also increases the penetration of social sector schemes as the availing of the schemes becomes more efficient for beneficiaries.

As an approach toward ensuring welfare for the most vulnerable population and as a corrective measure to social and economic inequities present in society, social protection schemes act as a mechanism to increase the resilience of marginalised people to socio-economic shocks. In a world where any volatile situation can push a massive section of the society into poverty, social protection schemes should be emphasised. India’s robust and multidimensional social protection system has been an inspiration to the world at large. These schemes are rooted in welfarism that focuses on making essential services affordable skill enhancement, opportunity creation, and sustainable living, ensuring a universal increase in the standard of living. The emphasis on the interaction between social and economic aspects of inequality helps us holistically drive policy action through social protection frameworks. It raises pertinent issues related to ease of living, and sectoral outcomes.

The article was published with Economic Times on May 19, 2022