Aspirational Districts Programme shifts the focus back on development 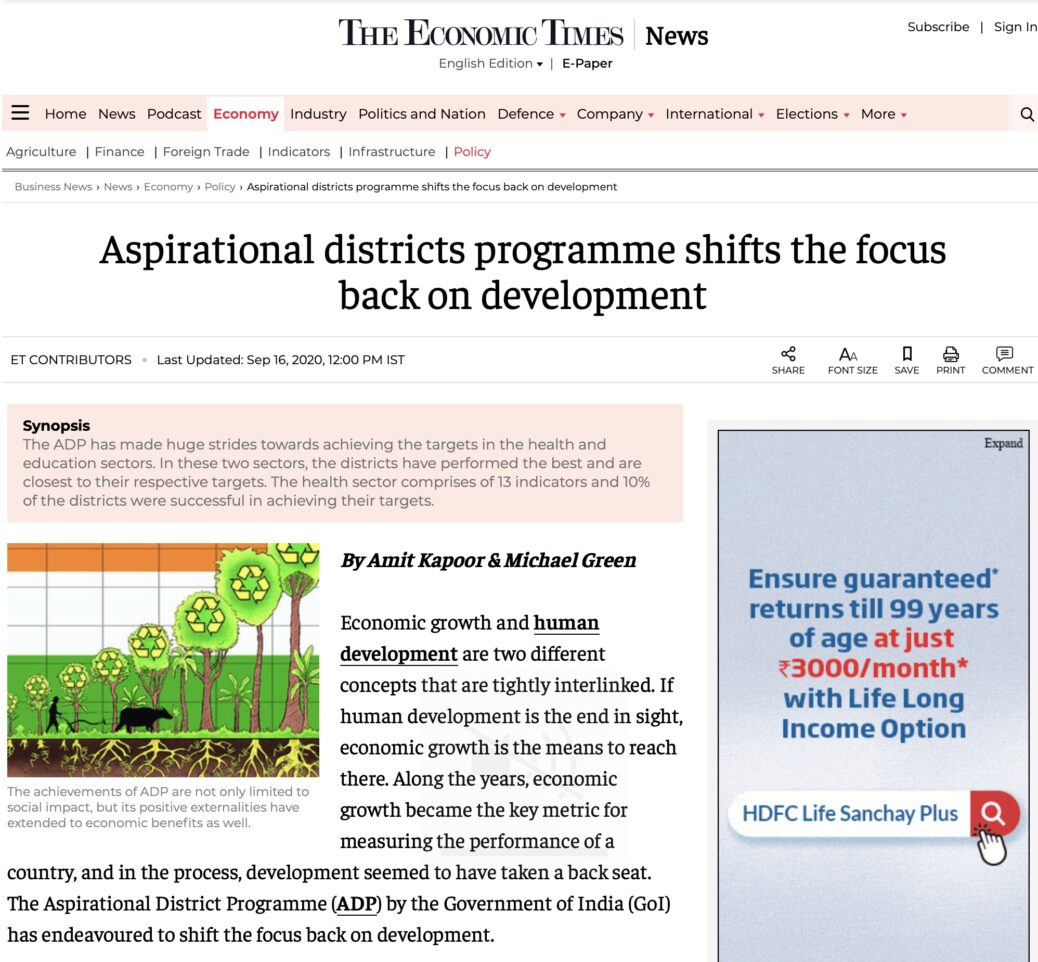 Aspirational Districts Programme shifts the focus back on development

Despite the upward growth trajectory since independence, India’s status of development leaves plenty of room for improvement, possibly because economic growth has not adequately translated into development, especially for the most downtrodden. It aligns with the larger global perception that recognizes GDP as the sole marker of success. However, economists like Joseph Stiglitz have professed against using GDP as a measure of development. Stiglitz states that GDP only focuses on material well-being rather than on health, education and other indicators of social development. Hence, it does not qualify as a good measure of well-being. This is one of the key principles that informed the inception of the ADP.

India too has measured its success within the narrow confines of economic prosperity but the discussion on the larger aspect of human development seems to be missing. This is partly the reason why India has struggled to convert its economic successes into social development. In the Social Progress Index, India was ranked at 102 position in 2019, while on the Human Development Index (HDI), India scored 0.647 in the same year. This underscores the need for an initiative like the ADP.

Keeping development as the end in sight, the GoI launched the ADP in January 2018 to document social outcomes in some of the most challenging regions in the country. The programme is currently implemented in 112 districts in 26 states and one union territory across the country, with the aim to measure and improve the quality of life of the people. Accordingly, it covers five broad sectors, namely health and nutrition, education, agriculture and water resources, financial inclusion and skill development, and basic infrastructure.

The ADP recognizes the importance of collective efforts in taking on the challenge of solving the long-persisting problems of development. Accordingly, it has taken the collaborative approach that involves NITI Aayog anchoring the programme at the central level, individual Ministries assuming separate responsibilities, and the state governments assuming the role of the main drivers of change. Each state has formed a committee under their respective Chief Secretaries to implement as well as track the programme. Each district has a central Prabhari Officer of the rank of Additional Secretary/ Joint Secretary to assess the progress and provide recommendations based on their local level findings.

At the same time, the ADP also imbibes the spirit of competitive federalism among geographies to drive efforts towards common goals. The programme recognizes the significance of competitiveness in facilitating efforts, and therefore inculcates the principle of competitiveness among the districts to motivate them to outperform their peers as well as learn from them. Besides boosting competition, the value of competitive federalism also enables working in partnership with the least developed regions of the country and help them transform. Since the programme is a collective venture, the partners do not work as external practitioners but are instead encouraged to integrate with the district administration. Thus, the programme takes a unique approach of embedding partners within the institutional rubric of the government, and blending competition and cooperation across different levels of governance and geographies to fuel the transformation of the districts.

Agriculture and financial inclusion have emerged as sectors that were farthest from achieving their targets. The outcomes show that most of the districts are 40-90 percent away from their targets in these sectors. The findings also show the sectoral disparity within the districts, wherein sectors like health and nutrition show overachievement of targets while other sectors lag far behind their set targets. This also indicates that there are no clear achievers and laggards across all sectors, that is, the districts have performed more or less equally.

Nevertheless, the high disparity in the outcomes across sectors can help the actors involved in the implementation to address the issues preventing districts from reaching their targets in these sectors. Moreover, the successes achieved in health and education sectors by some of the districts have set a precedence for other districts, and will boost the morale of the actors involved.

Every policy intervention raises one important question: Did it really make a difference or development would have progressed at the same rate regardless of the intervention? The ADP report has endeavoured to clear such doubts. In order to measure the additional value created by the ADP to influence growth trajectories of the indicators in comparison to the secular trends, the study analyses indicators from the domain of Health and Nutrition and Education to run Z-tests. It helps identify whether the improvements under the programme were statistically significant or were broadly in tune with the secular trends that had existed before the implementation of the programme. The results show that nine out of 14 indicators tested have shown statistically significant improvement. This proved that the intervention was able to create additional value over and above the secular trends.

Similar differences were also seen in rates of progress across indicators. Some indicators show change over the long-run while some on a short-run, so the former should be assessed on an annual basis while the latter on a quarterly basis. The survey methods were adjusted to reflect this varied frequency of change across the indicators. These changes ensure a fairer basis of comparison and assessment of competition.

In the course of implementation of ADP, three best practices have also emerged from the programme. First is the use of awareness campaigns. Many districts were able to reach out to people who were left out of the development journey through awareness campaigns. It helped create a common platform for engagement and thus helped with the integration of actors and beneficiaries. Second is the collaboration between different actors. The implementation of ADP was a teamwork of different actors who leveraged assets and networks in a collective effort. By incentivising collaboration between tiers and agencies of the government and with the private and civil society sectors, the programme facilitated the outreach capacity of the district administration in integrating the population. Thirdly, the ADP adopted a data-driven approach to drive change. The programme used data to measure impact, locate nodes for improvement and to identify interventions required. The data-based interventions have contributed to the success of ADP.

The achievements of ADP are not only limited to social impact, but its positive externalities have extended to economic benefits as well. For instance, the significant fall in Severe Acute Malnutrition (SAM) among children recorded in the programme will have a positive impact on productivity and lifetime earnings in the future. SAM adversely affects the mental and physical well-being of children, which can follow them into adulthood and prevent them from participating in the workforce. The study attempts to measure the lifetime economic gains that can be made by averting any kind of disability or death pertaining to malnutrition. The economic impact of reducing SAM under the programme comes out to be a mammoth Rs 1.43 lakh crore.

The link between economic growth and development thus comes to a full circle. If economic growth can aid development, then development can also contribute towards economic growth in the long run. The intrinsic value of social progress in allowing individuals to live a fulfilling life cannot be underestimated, but the instrumental value of human development in the form of higher productivity and wealth generation highlighted by the study can further incentivise the government to direct programmes towards social benefits. The ADP is a major step towards enhancing the quality of life of the people as well as the future prospects of the economy. The programme’s focus on development, regional disparity and competitive federalism sets it apart from other initiatives. While there is more ground to cover, it has been successful in achieving some of the goals in the first year of its implementation.

The article was published with Economic Times on September 16, 2020.