Political leadership in the Indian context 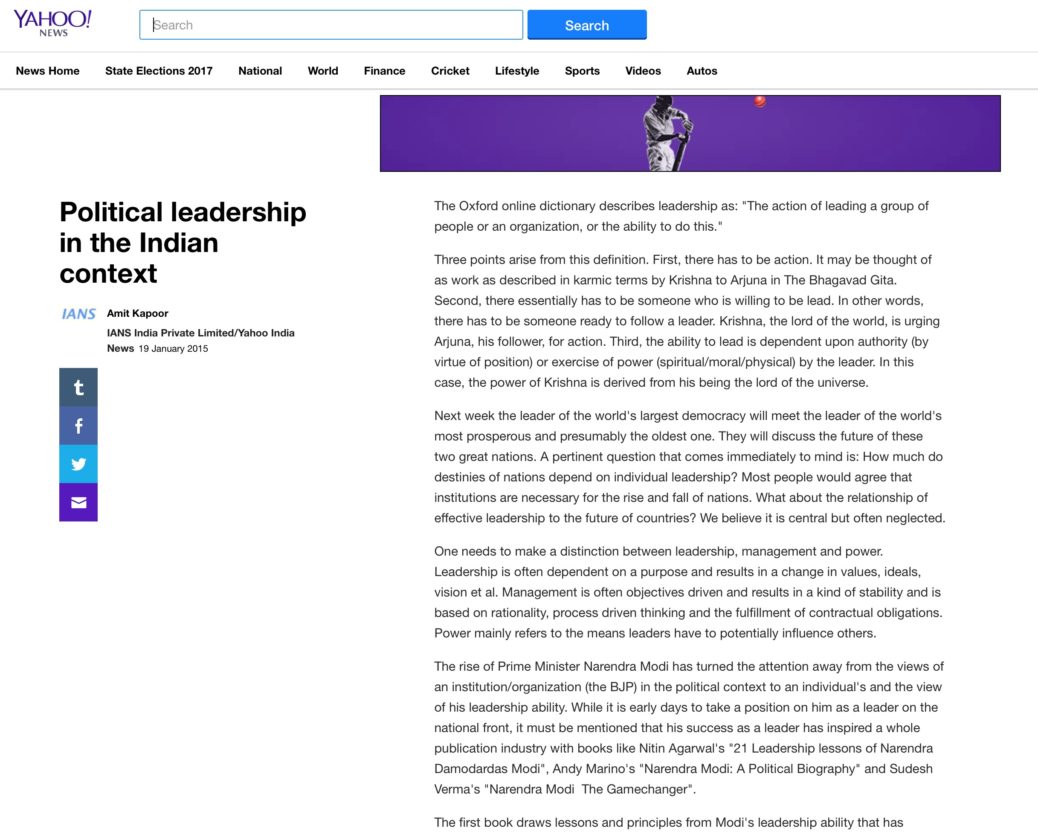 The Oxford online dictionary describes leadership as: “The action of leading a group of people or an organization, or the ability to do this.”

Three points arise from this definition. First, there has to be action. It may be thought of as work as described in karmic terms by Krishna to Arjuna in The Bhagavad Gita. Second, there essentially has to be someone who is willing to be lead. In other words, there has to be someone ready to follow a leader. Krishna, the lord of the world, is urging Arjuna, his follower, for action. Third, the ability to lead is dependent upon authority (by virtue of position) or exercise of power (spiritual/moral/physical) by the leader. In this case, the power of Krishna is derived from his being the lord of the universe.

Next week the leader of the world’s largest democracy will meet the leader of the world’s most prosperous and presumably the oldest one. They will discuss the future of these two great nations. A pertinent question that comes immediately to mind is: How much do destinies of nations depend on individual leadership? Most people would agree that institutions are necessary for the rise and fall of nations. What about the relationship of effective leadership to the future of countries? We believe it is central but often neglected.

One needs to make a distinction between leadership, management and power. Leadership is often dependent on a purpose and results in a change in values, ideals, vision et al. Management is often objectives driven and results in a kind of stability and is based on rationality, process driven thinking and the fulfillment of contractual obligations. Power mainly refers to the means leaders have to potentially influence others.

The rise of Prime Minister Narendra Modi has turned the attention away from the views of an institution/organization (the BJP) in the political context to an individual’s and the view of his leadership ability. While it is early days to take a position on him as a leader on the national front, it must be mentioned that his success as a leader has inspired a whole publication industry with books like Nitin Agarwal’s “21 Leadership lessons of Narendra Damodardas Modi”, Andy Marino’s “Narendra Modi: A Political Biography” and Sudesh Verma’s “Narendra Modi  The Gamechanger”.

The first book draws lessons and principles from Modi’s leadership ability that has brought him success. Marino deals with an analysis of Modi’s personal and political life. Verma’s book focuses on Narendra Modi the man. All these books allude to a broader point of the need for undertaking research in political leadership in postcolonial societies that has largely been missing atleast in the academic world in the Indian context.

Although one hears of leadership programmes/modules/development of leadership in educational institutions in India, research in political as well as business leadership is scant when we compare it to the US. It could be because the initial focus in a developing country context is on building proper institutions rather than researching leadership. However, as regards people, from times immemorial, leaders have caught their fascination. In earlier times often the people who are today recognized as great leaders were either from the religious/spiritual domain (think Mohammad, or Jesus or Kabir or Vivekananda or even the Dalai Lama today) or from the political/militaristic domain (think Alexander, Napolean, Akbar, Ashoka and the like).

If one looks at the political context of the previous century to name just a few political leaders, some that would immediately come to mind would be Gandhi, Churchill, Kennedy, Reagan, Thatcher, Roosevelt, Mao, Hitler, Mussolini, Stalin, Mandela and the like. Some of them did an excellent service to their nations, others ruined them.

Similarly businesses too have had great leaders in the previous century – think of the likes of JP Morgan, John D. Rockefeller, Henry Ford and Walt Disney, and most recently, Steve Jobs, Dhirubhai Ambani and Ratan Tata. The list is no way complete and is only meant to serve a suggestive purpose. What has their impact been? What can we learn from their leadership? While we have taken leaders, that too a select few from the governments and corporations, people in the arts, civil society, the judiciary and the media have been equally if not more distinguished. What impact has their lives made on the fate of nations? That is a crucial starting point in the analysis of leadership and its implications for the rise and fall of nations.

It must be noted that leadership as a theme is as old as political inquiry itself. Early examples of people grappling with the idea of leadership come from Plato, Machiavelli, Sun Tzu, Confucius and Kautilya et al. In the most recent past, it has been examined through various lenses and approaches and therefore several theories of leadership have emerged. Several experts and scholars too have actively contributed in the western world to the research and scholarship on leadership, most prominent among them being Warren Bennis, Stephen Covey, and Peter F. Drucker. Perhaps in the years to come we may see more inquiry into the nature of leadership in the Indian context. The present government would be indeed wise to remember Ronald Reagan’s advice on leadership taken from 21 leadership lessons of Narendra Modi: “To grasp and hold a vision that is the very essence of successful leadership.” With his recent address at a global economic summit we know Modi has a vision for India, but will he be able to hold on to it, we will have to wait and watch.