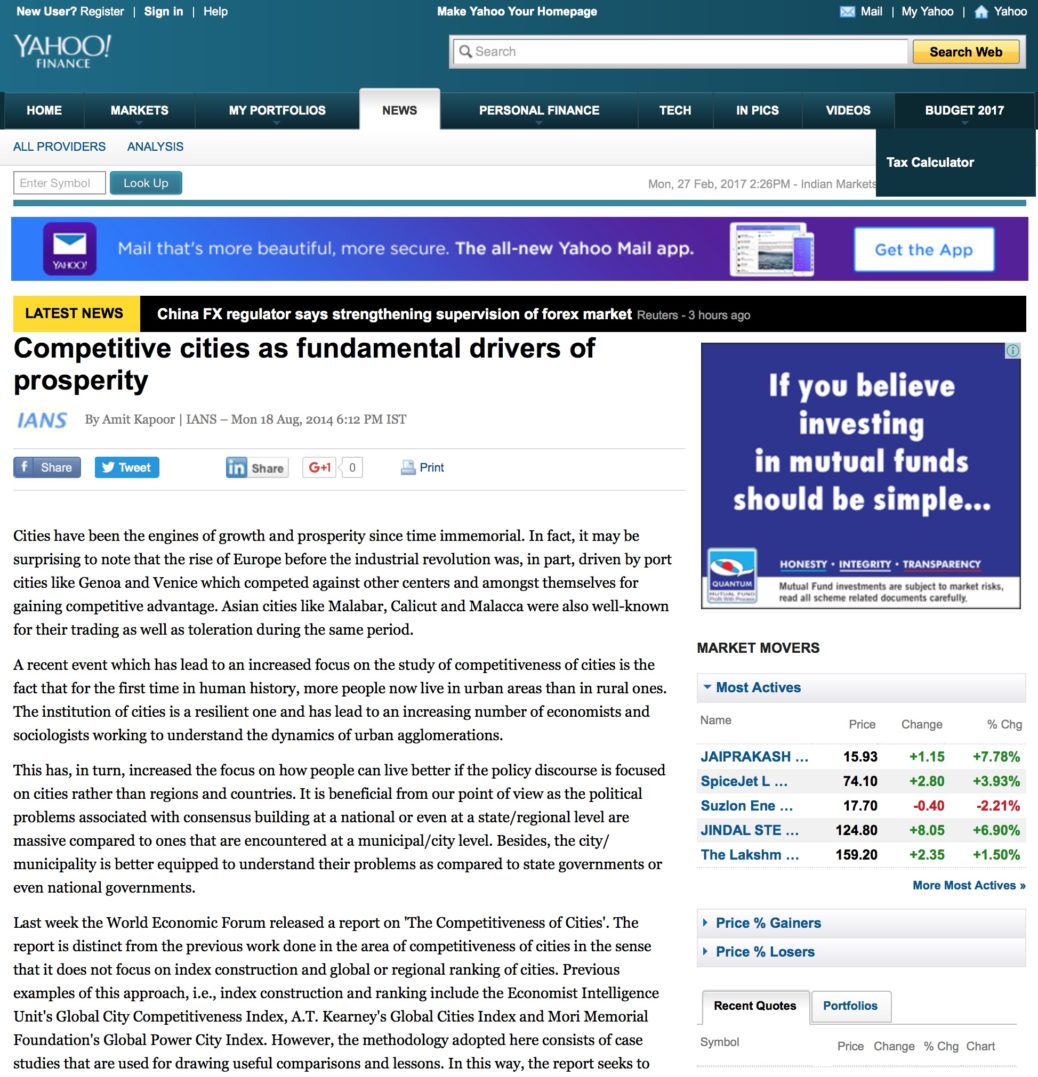 Cities have been the engines of growth and prosperity since time immemorial. In fact, it may be surprising to note that the rise of Europe before the industrial revolution was in part, driven by port cities like Genoa and Venice which competed against other centers and amongst themselves for gaining competitive advantage. The Asian cities like Malabar, Calicut and Malacca, were also well known for their trading as well as toleration during the same period.

A recent event which has lead to an increased focus on the study of competitiveness of cities is the fact that for the first time in human history more people now live in urban areas than in rural ones. The institution of cities is a resilient one and has lead to an increasing number of economists and sociologists working to understand the dynamics of urban agglomerations.

This has in turn increased the focus on how people can live better if the policy discourse is focused on cities rather than regions and countries. It is beneficial from our point of view as the political problems associated with consensus building at a national or even at a state/regional level are massive compared to ones that are encountered at a municipal/city level. Besides the city/ municipality is better equipped to understand their problems as compared to state governments or even national governments.

Last week the World Economic Forum released a report on ‘The Competitiveness of Cities.’ The report was distinct from the previous work done in the area of competitiveness of cities in the sense that it does not focus on index construction and global or regional ranking of cities. Previous examples of this approach, i.e., index construction and ranking  include the Economist Intelligence Unit’s Global City Competitiveness Index, A.T. Kearney’s Global Cities Index and Mori Memorial Foundation’s Global Power City Index. However, the methodology adopted here consists of case studies that are used for drawing useful comparisons and lessons. In this way, the report seeks to complement rather than replicate quantitative studies that have already been undertaken by a host of organizations.

The report has a ‘City Competitiveness Map’ which has four critical dimensions associated with it. First are a set of megatrends that have a bearing on the  competitiveness of a city.  The report clearly identifies six megatrends. These are (1) Urbanization, demographics and the emerging middle class, (2) rising inequality, (3) sustainability, (4) technological change, (5) industrial clusters and global value chains; and (6) governance. Some of these megatrends have a concentrating impact on cities like urbanization and clustering, while others have a dispersing impact like technological advancements and governance structures. These megatrends are critical in understanding and defining the competitiveness of cities.

It leads us to the second critical dimension namely a suitable definition of City competitiveness. City competitiveness according to the report is defined as the set of factors – policies, institutions, strategies and processes – that determines the level of sustainable productivity of a city. The report clearly mentions factoring in economic, environmental and social issues as part of defining sustainability aspect of productivity.

The third critical dimension of the competitiveness map is the development of a taxonomy that broadly speaking is an analytical framework for looking at city competitiveness. Several guidelines were used for developing a four-part  taxonomy in the report for understanding factors responsible for city competitiveness. This four-point taxonomy consists of 1. Institutions, which focus on elements to be taken into account while focussing on how to reform? 2. Policies and regulation of the business environment that focuses on what to reform? These include macroeconomic fiscal policies as well as policies pertaining to trade and FDI in cities. 3. Hard connectivity that focuses on core physical infrastructure connecting people to energy, water and other services. The main components under this are transportation (air, road and rail), communications, energy and logistic systems within the city 4. Soft connectivity that focuses on understanding atmosphere of tolerance, free expression and cosmopolitanism which is critical in making investments in hard infrastructure and new technology.

The report has contributions from across various regions of the world with well known experts. It will surely further the debate on city competitiveness as being a fundamental driver of not only city prosperity but at a different level of regional and in turn national prosperity.

Disclosure:  Dr. Amit Kapoor, co – author of this piece, was a contributing author for three case studies on Indian cities for this WEF Report.