The Dynamics of India’s Growth Recession 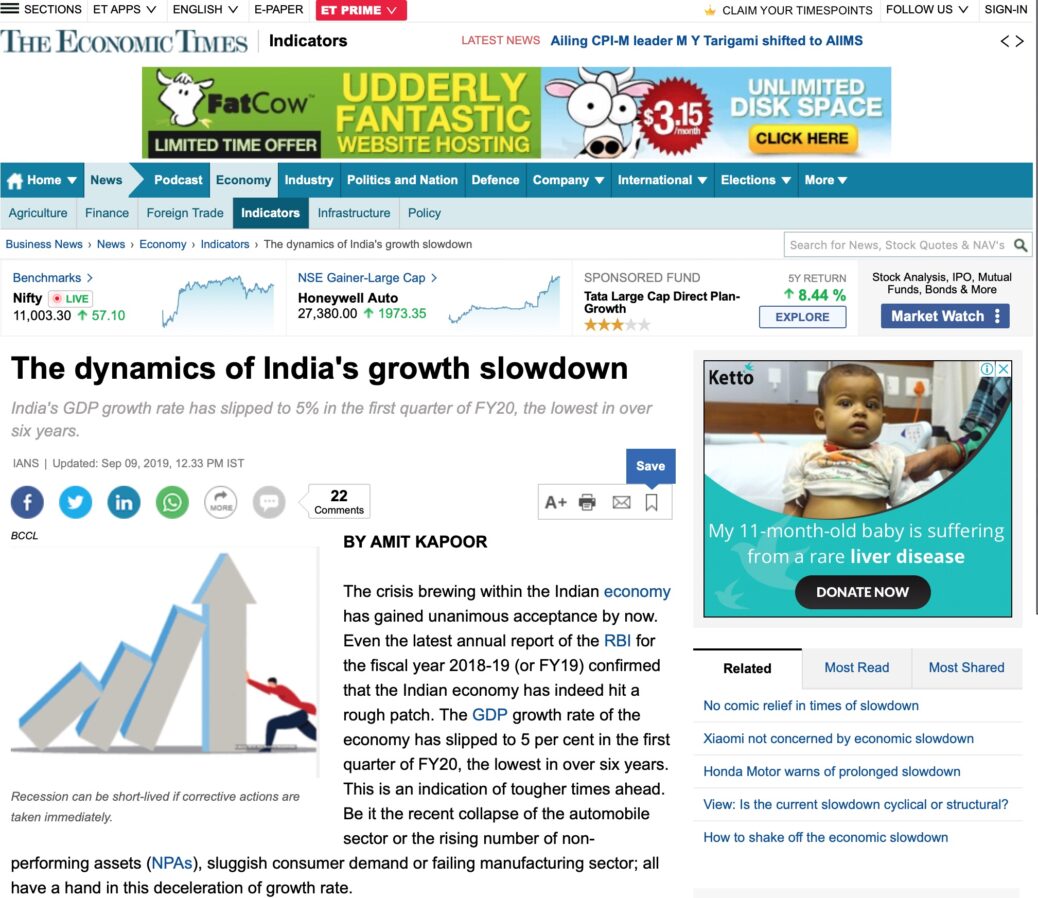 The Dynamics of India’s Growth Recession

The crisis brewing within the Indian economy has gained unanimous acceptance by now. Even the latest annual report of the RBI for the fiscal year 2018-19 (or FY19) confirmed that the Indian economy has indeed hit a rough patch. The GDP growth rate of the economy has slipped to 5% in the first quarter of FY20, the lowest in over six years. This is an indication of tougher times ahead. Be it the recent collapse of the automobile sector or the rising number of non-performing assets (NPAs), sluggish consumer demand or failing manufacturing sector; all have a hand in this deceleration of growth rate.

The spurt in instances of job losses from automobile manufacturers to biscuit makers has led to the general acceptance of the downturn. This is the third instance of an economic slowdown for India in the past decade after the ones that began in June 2008 and March 2011. The technical term for the same is a growth recession. A recession is defined in economics as three consecutive quarters of contraction in GDP. But since India is a large developing economy, contraction is a rarity. The last instance of negative growth for India was in 1979. A growth recession is more commonplace where the economy continues to grow but at a slower pace than usual for a sustained period, what India has been facing nowadays.

The growth of the Indian economy had been predominated by consumption inclusive of both- Private Final Consumption Expenditure (PFCE) as well as the Government Final Consumption Expenditure (GFCE). Over the last five years, the total consumption expenditure by Indian households had accelerated with an average growth rate of 7.8 percent compared to an average of 6.1 percent in 2011-14. But the recent sharp fall in PFCE in the June quarter to 3.1 percent compared to 7.2 percent in the March quarter has significantly contributed to the recent slowdown.

That being said, any fall in consumption expenditure, as and when it would happen, would escalate the crisis even more. If consumption spending falls, then output and employment levels also fall since consumption expenditure directly impacts the other two. As a consequence, the economy would stagnate, and prices deflate. Lower prices, if unable to recover the costs, would halt the operations of any firm and would initiate the layoff process. This, in turn, reduces earnings further. Hence this vicious cycle keeps on repeating itself until the economy slips into a deeper state of shock.

In addition, another major component of India’s GDP is investment, induced by both – private and government sectors. It has been a key driver of growth since the liberalisation of 1991. Though gross fixed capital formation (GFCF) – the main constituent of investment in the economy, increased, yet its contribution to growth fell by 6.2 percentage points in 2014-19 than in 2011-14. The slackening of investment lowers the level of infrastructure development, causes hesitation in creating small businesses, stop entrepreneurs from investing in research and development, and thus stagnates technological development. Capital Investments are long term gains that generate profitability for many years by improving operational efficiency and boosting innovation. It goes without saying that for holistic growth of the economy and to gain competitive edge over others, the economy must innovate.

In addition to these factors, the slump in the economy is also affected by the various exogenous factors. A leading dampener is the U.S.- China trade war, which has intensified over time and has contracted world trade and, in turn, Indian exports. Also, high rates of GST, liquidity crisis in NBFCs, and shift in the behavioural pattern of the workforce due to the entry of young people has discouraged savings. When people save less in the economy, it leaves less money for investments.

Recession can be short-lived if corrective actions are taken immediately, failure of which can have a prolonged effect on the health of an economy. Amidst the news of slowdown, rise in FDI inflows from $12.7bn (FY19) to $16.3 bn (Q1 FY20) brought respite for the government. In a welcoming move, government revised GST for the automobile sector, opened up FDI in contract manufacturing sector and even announced the recapitalization of the banking sector Together with these, it should also focus on optimum utilization of funds granted by RBI and direct them to boost investment in the economy both infrastructural and research investment. Further, structural shifts over the long run can be achieved through tapping into the health and education sectors that long for quality improvements. Only such long-lasting structural changes can improve the growth potential of the Indian economy and deter the possibility of three slowdowns within the short span of a decade.

The article was published with Economic Times, Newsd and Outlook India on September 9, 2019