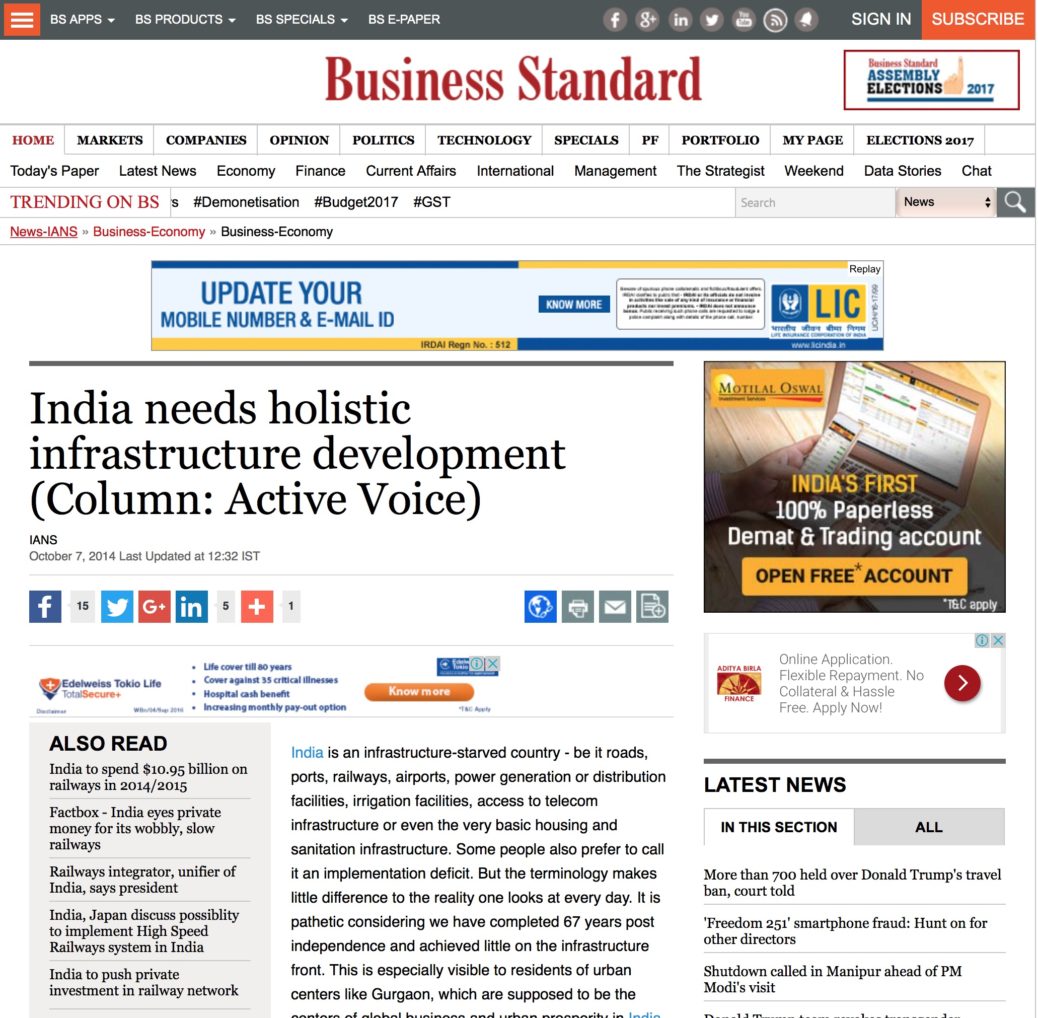 India is an infrastructure-starved country, be it roads, ports, railways, airports, power generation or distribution facilities, irrigation facilities, access to telecom infrastructure or even the very basic housing and sanitation infrastructure. Some people also prefer to call it an implementation deficit. But the terminology makes little difference to the reality one looks at every day. It is pathetic considering we have completed 67 years post independence and achieved little on the infrastructure front. This is especially visible to residents of urban centers like Gurgaon, which are supposed to be the centers of global business and urban prosperity in India. The problem we believe is that we tend to look at infrastructure in silos and not as a concrete whole that is critically important for growth and development of this critical enabler for almost all aspects of our lives.

The need for sustainable infrastructure development can hardly be overstated at this critical juncture when more and more people enter the workforce every year in search of jobs that presents us with a ‘demographic dividend’. One of the key challenges in front of the present government is rapidly developing India’s infrastructure. This is because infrastructure is not only critical for the movement of labour and capital across the length and breadth of the country but also is instrumental in basic development as well as in increasing the speed of doing business. Infrastructure improvements have to be carried out in the following two ways.

First, improvements will have to be undertaken in existing infrastructure be it railway corridors, roads, electricity generation and distribution, ports, airports, dams, irrigation, sanitation, access to telecom, etc. Secondly, and also equally critically there should be the creation of new infrastructure in places and areas where there is a plaguing infrastructure deficit. It is true for sectors like sanitation where India fares poorly even within the South Asian Region (SAR) according to a recent paper by World Bank.

If one compares India’s infrastructure development performance with stellar successes like China, we find that we have lagged behind. Consider the railroads development in China. China had close to 23000 route Km of railways in 1951 compared with the commensurate figure of 53500 Km for India. It was because India had inherited a colonial past where infrastructure development formed the basis of efficient administration for the British Raj. According to the latest statistics of World Bank, China has surpassed India and had close to 66000-route Km length of railways compared to 64,000 for India in 2012. Also, the addition in China has approximately 10000 Km of high-speed railways (HSR) (speeds of trains > 250 Km/hr.) that is more than the entire high-speed rail network of the European Union. India does not according to the HSR definition mentioned above (Speed of trains > 250 Km/hr.) have a single route Km of high-speed rails at present. The best way to look at this would be estimating the gross productivity losses India faces because of the slow railways system.

The golden quadrilateral was an endeavor that helped India bridge the rural-urban divide. However, till today, national and state highways constitute less than 5 percent of the total roads in India. Apart from roads, telecom access was another area where we have made progress, but much needs to be done for greater digital inclusion of the masses. With respect to power generation and distribution, port and airport development as well as dams and irrigation systems, critical areas include innovative financing mechanisms as well as rethinking the role that the private sector can play in enabling their development.

In the present scenario, states will have to be made partners in the infrastructure development process if initiatives like the Make in India and Smart Cities are to become a success. Also, a large number of people migrating to cities in search of employment and a better life pose significant challenges to infrastructure development. Necessities like electricity supply, affordable housing with adequate sanitation facilities, as well as proper roads, are major areas of concern, which should be looked into holistically, and appropriate policies formed and more importantly implemented. It should be followed up with monitoring the progress of initiatives in a time bound manner for building a better and more prosperous India.  The policy formulation and public consensus on the same are presently being built. What remains to be seen is, do we have the capability to implement what we have envisaged? We would severely doubt this considering our past experience and also because the government has changed but the apathetic governance mechanisms exercised by and through the bureaucracy remain the same.

Published with Business Standard on October 7, 2014.