When a huge discount is not anti-competitive 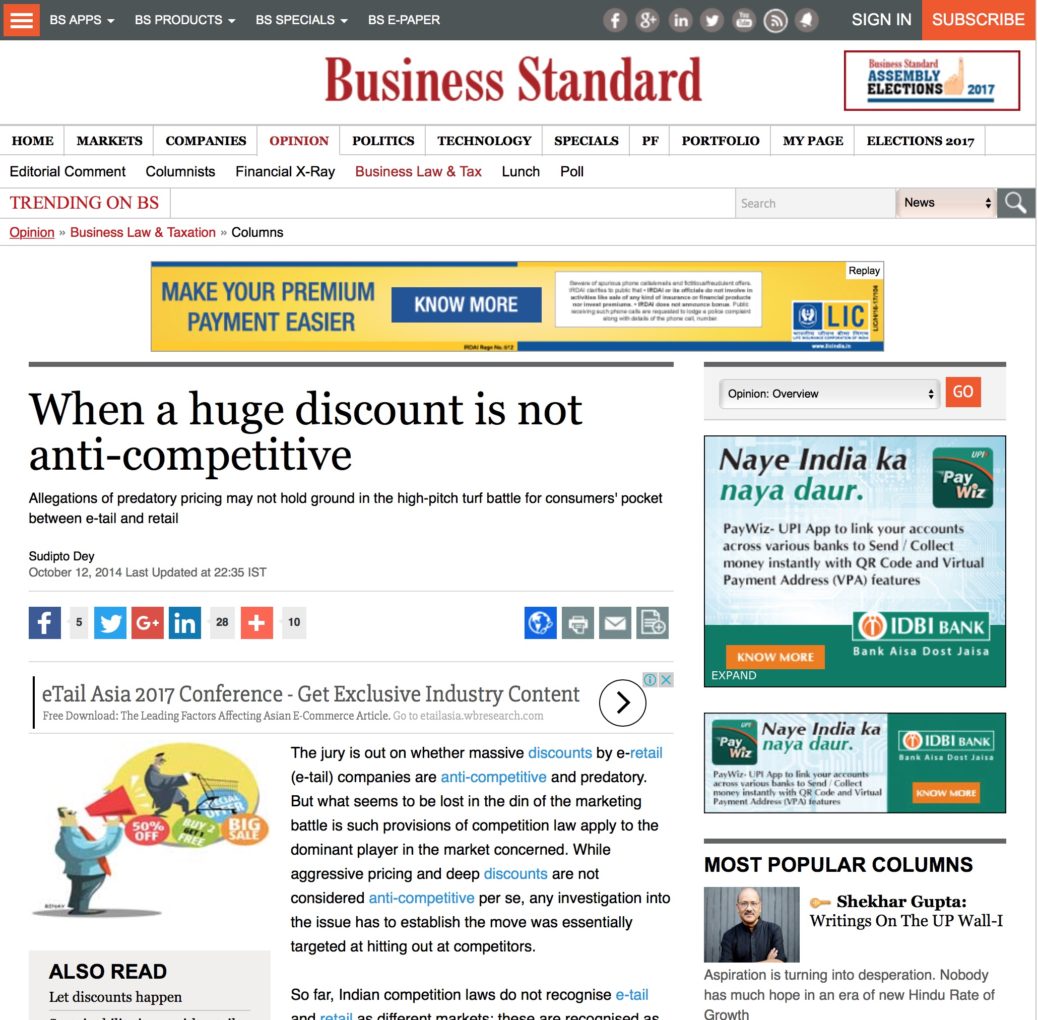 The jury is out on whether massive discounts by e-retail (e-tail) companies are anti-competitive and predatory. But what seems to be lost in the din of the marketing battle is such provisions of competition law apply to the dominant player in the market concerned. While aggressive pricing and deep discounts are not considered anti-competitive per se, any investigation into the issue has to establish the move was essentially targeted at hitting out at competitors.

So far, Indian competition laws do not recognise e-tail and retail as different markets; these are recognised as different platforms for selling a product. The Competition Commission of India, in an order issued on May 19 in a case (Ashish Ahuja vs Snap Deal and others), said, “Both offline and online markets differ in terms of discounts and shopping experience; buyers weigh the options available in both markets and decide accordingly. If the price in the online market increases significantly, the consumer is likely to shift towards the offline market and vice-versa. Therefore, the commission is of the view these two markets are different channels of distribution of the same product, not two different relevant markets.”

Competition authorities in the US, the European Union, etc, treat e-tail and retail as two separate markets.

“Aggressive pricing, including deep discounts, are not anti-competitive per se,” says competition lawyer M S Ananth of corporate law firm Nishith Desai Associates. “Unless the practice is such that it is designed to defeat competition, it cannot, in law, be anti-competitive,” he adds.

Competition lawyers say the Competition Commission investigates matters that are anti-competitive in practice, through oppressive agreements, cartel or cartel-like behaviour, or mergers between companies, which are likely to lead to an anti-competitive effect in the ‘relevant market’. To be anti-competitive, any deep discount should cause an “appreciable adverse effect on competition”, say lawyers.

The competition law does not define what constitutes “deep discount”. Mobile retailers have been up in arms against discounts offered by e-tail players. “There should be a regulatory mechanism to monitor e-commerce sales,” says Khailash Lakhyani, president of the All India Mobile Retailers Association.

A lawyer advising some e-tail companies says, “Offline players can cry hoarse. However, unless they can demonstrate the behaviour is designed to defeat competition, it cannot be anti-competitive per se.” Moreover, the definition of predatory pricing under the competition Act is linked to the action of a dominant market player. “One has to first establish the e-tail player under question is dominant in that market,” says a former member of the Competition Commission. Given the multiple players in the e-commerce space, the issue of market dominance is unlikely to pass muster, the official adds.

While looking at cases of predatory pricing, competition law investigators consider the sustainability of such pricing strategies, and how the discounts are funded. “There has to be an economic justification for the discounts,” says Yogen Vaidya, partner at EY’s fraud investigation and dispute services. “They also compute the value of sales generated through such discounts, and how these impact overall sales in the market,” he adds.

For this reason, a stock clearance sale or a discount offered by a retailer to mitigate losses is not considered anti-competitive, even if the retailer is selling at rates below the cost of acquisition.

Amit Kapoor, president and chief executive, Indian Council on Competitiveness, a think-tank on matters relating to competition and markets, says the reason why massive seasonal discounts offered by many offline retailers aren’t considered anti-competitive is because this has a limited impact on competition in a specific catchment area. “The huge discount sales by e-tailers are part of a market penetration strategy,” he says. With the e-tail channel accounting for just a per cent of the estimated $500 billion of annual retail sales in India, the online market is still too nascent in its evolutionary stage to be considered a threat to offline players.

The deep discounts currently offered by e-tail players might not make the Competition Commission take suo moto action, unless there is a formal complaint. As the battle between e-tail and retail heats up, competition law experts say e-tailers could come under the gaze of the anti-monopoly body if they come across anti-competitive agreements such as the presence of certain reservation clauses, or vertical competition issues such as cases of refusal to deal, a selective distribution system, or resale price maintenance.

Lawyers say there are many cases of vertical restrictions in contracts between brands and online platforms in relation to sales. “The Competition Commission could investigate these under the laws relating to anti-competitive agreement and abuse of dominance under Indian competition law,” says Vaidya of EY.

Dr. Amit Kapoor views were captured in the article as a statement. Published with Business Standard on October 12, 2014.