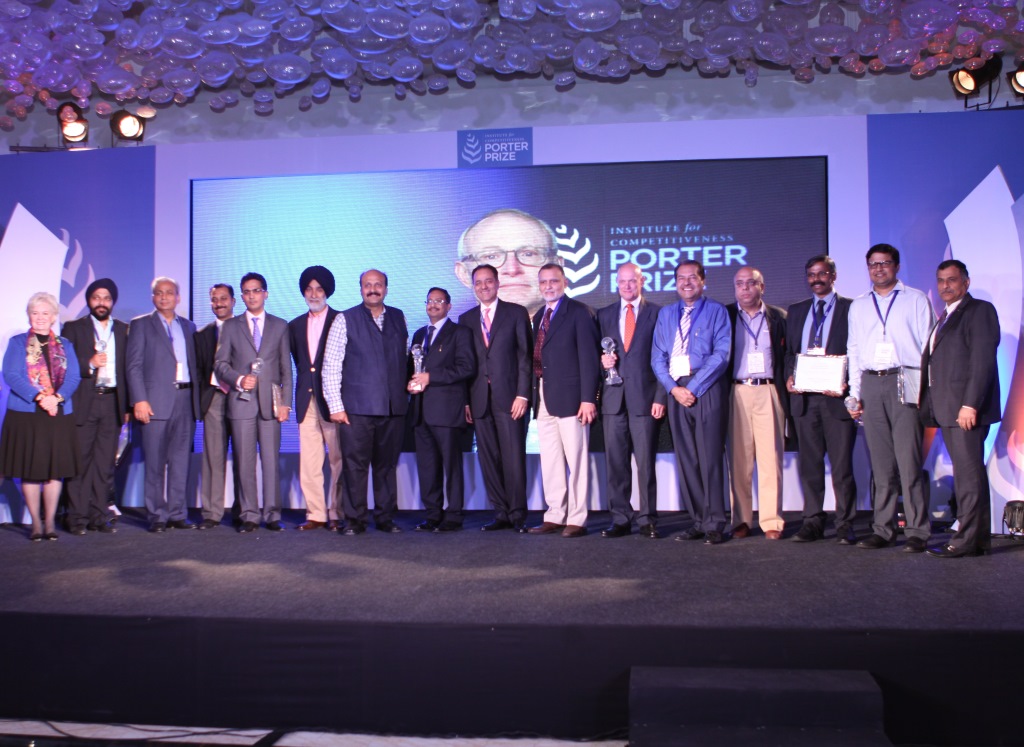 Porter Prize recognizes the strategic acumen of corporates in India

In his address to the hugely interactive group of best of corporate in India, Professor Porter congratulated everyone on participating in the incredible process. He shared his passion for competitiveness and its practice. Very significantly, he asserted the hitherto thought agendas of economic strategy & social progress as separate pursuits actually needed an integrated approach. This he further said was not a balancing exercise between two conflicting either or agendas but a blend was mandated. Apart from sharing the macro and micro elements of his competitiveness framework, he exhorted Indian corporate to carry a deeper sole search as to how it would impact the society and economy. It was interesting to hear him say philanthropy was important but not very important because business serves society better by creating better products, sourcing raw material efficiently and generating useful infrastructure. He even said countries which are self-critical have better leverage their natural endowments. He underlined the role of successful clusters and emphasized that creating jobs with low wages was not adequate.

Shashi Ruia, Chairman, Essar Group in his keynote said, “I strongly believe that manufacturing is the backbone of a strong economy. To fulfill the dream of India being a manufacturing hub or a force we need skilled labour and additionally without a doubt the world tomorrow would be driven by confluence of economic and social objectives.

Etienne Benet, CEO, Nestle India Limited emphasized on the role that Nestle plays in the industry and profoundly said, “Nestle is clearly driven by the idea of creating shared value.”

Resonating the views of Professor Porter Sanjiv Mehta said that the idea is to find the confluence between economic and social objectives. Business clearly can be a force of good. A responsible form of capitalism will depend on leaders we have. The leaders would have the responsibility to build a sustainable business model and we shall have to dramatically change the way we distribute wealth and use our resources.

Lastly, Dr. Amit Kapoor, Institute for Competitiveness congratulated all the awardees of the evening. On behalf of Indian corporate, he extended a promise to Professor Porter to further evangelize concept and practice of competitiveness to states, cities and enterprises of India.

To know more about the Porter Prize 2014 winners, visit http://www.porterprize.in/winners-2014/

Porter Prize is named after Michael E Porter who is Professor at Harvard Business School, living legend and father of modern strategy field. The central idea of the Porter Prize is to propel companies to compete on the basis of value creation, innovation and strategy. Institute for Competitiveness, India is an independent, international initiative centered in India, dedicated to enlarging and disseminating the body of research and knowledge on competition and strategy, pioneered over the last 25 years by Professor M.E. Porter of the Institute for Strategy and Competitiveness, Harvard Business School (ISC, HBS), USA. Institute for Competitiveness, India works in affiliation with ISC, HBS, USA to offer academic & executive courses, conduct indigenous research and provide advisory services to corporate and Government within the country. The institute studies competition and its implications for company strategy; the competitiveness of nations, regions & cities; suggests and provides solutions for social problems, Institute for