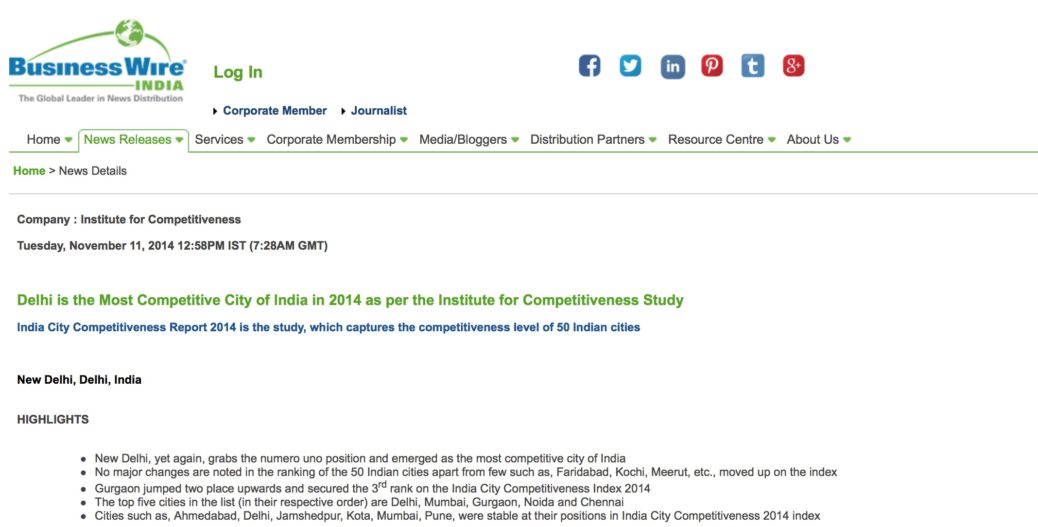 India City Competitiveness Report 2014 in its seventh edition is back with the assessment of the 50 Indian cities on the pillars of competitiveness. This year’s index incorporates improved methodology and addition of parameters, which represents the reality of a city in a better manner. It may be noted that city competitiveness index is a methodological computation of a city’s numeric data indicators, encompassing different dimensions, which henceforth, reflects the performance of a city. It does not assess a city based on just one parameter. It is a structural process to identify the most competitive city of the country and map their growth annually.

The India City Competitiveness Report 2014 is based on the Microeconomic Diamond Model laid down by Michael E Porter, Bishop William Lawrence University Professor, based at Harvard Business School. The model is based on four pillars of competitiveness that are factor conditions, demand conditions, context for strategy and rivalry and supporting and related industries. India City Competitiveness Report 2014 assesses the vital details of a city on a set of well-defined 180 indicators.

The Capital of the country, New Delhi secured the title of the most competitive city of India, fifth time in a row. The city looks unbeatable on parameters like, physical infrastructure, skilled manpower, diversity of firms and good governance. The only areas where the city lags is administrative and institutional support, which can affect the performance of the city over a period of time.

Slight shuffles were witnessed in the ranking of the top ten contenders in the India City Competitiveness Index 2014. Gurgaon and Noida jumped upwards three positions to take the 3rd and 4th rank. Similarly, Bengaluru moved up one position and is now spotted at 7th.  On the other hand, Chennai, Hyderabad and Kolkata dropped each by three positions. The rest of the cities, Delhi (1st), Mumbai (2nd), Pune (9th) and Ahmedabad (10th) were stable at their respective positions.

The slot containing cities of the order 11-20 is largely dominated by the cities from the southwest part of the country. Indicating that they are improving upon the pillars of factor and demand conditions. Thus showcasing their potential to move up on the competitiveness ladder. Cities, which have performed well in the slot, are Kochi (11th), Chandigarh (13th), Nashik (17th) and Vadodara (19th).

The next set of cities that is from 21-30 ranks are Tier ‘Y’ cities (as categorized by the Sixth Central Pay Commission wherein Tier Y is equivalent to Tier 2) which have promising future and are proving themselves on the pillars of competitiveness. Cities, which have moved up in the slot are Faridabad (23rd), Mysore (24th), Kanpur (26th) and Varanasi (28th). Rest of the cities has demonstrated a drop from their previous year’s ranking.

It has been observed in the India City Competitiveness Report 2014 that the smaller cities are booming fast and are steadily going to contribute significantly towards the prosperity of the nation. They are the budding growth centers, which are continuously improving their competitiveness levels year-on-year. The need is to nurture them as per their unique characteristics and make them the best in class. Therefore their potential should be harnessed accordingly so as to compete with the global cities on certain parameters.

Every Indian city should draft a common vision statement, connect with major stakeholders, decode the new dimensions and build transparency in the system by implementing innovative ideas. This would help them to improve their competitiveness and transform themselves into successful cities.

The report can act as a supporting guide for corporates, governance bodies and residents of a city to map the Indian cities w.r.t. their performance and investment options. They can obtain a well-researched market overview of the city and then formulate their location strategy. They can also direct policy makers and suggest suitable measures for city productivity through holistic growth.

You can look at the rankings of the 50 Indian cities on the India City Competitiveness Index 2014, available at https://competitiveness.in/wp-content/uploads/2012/01/CCR2014-Ranking.pdf

About Institute For Competitiveness

The Institute for Competitiveness is an international think tank dedicated to conducting and disseminating meaningful research in the core fields of strategy, economic development, productivity and prosperity in order to create value for all. IFC studies competition and its implications for company strategy, the competitiveness of nations, regions and cities, and thus generates guidelines businesses and those in governance. The institute’s core activities revolve around disseminating ideas to various bodies, including companies and governments, through events, publications and programs. Find out more at www.competitiveness.in.