How The States Stack up on Competitiveness Rankings in India 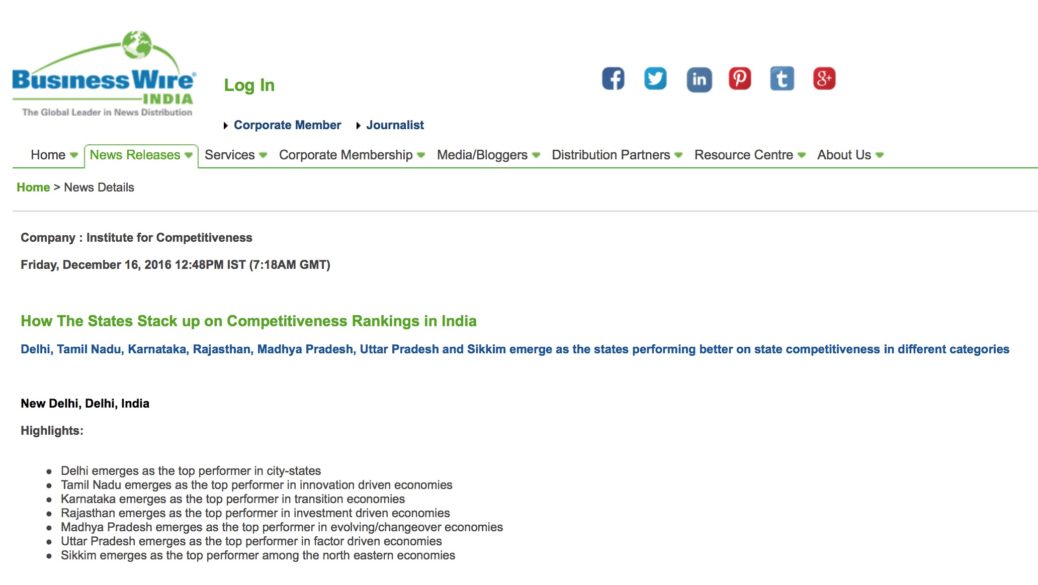 The report uses two measures of classification namely an economic per capita GDP measure as well as using the geographic measure for states in the northeastern India. The distinct categories of states under the seven heads of – City States, Innovation Driven Economies, Transition Economies, Investment Driven Economies, Changeover Economies, Emerging Economies and North Eastern Economies. These are the same as last year’s classification. The stage of economies aids in comparison between states at a similar level of economic development in the country. These are helpful in understanding agglomerations affects and take policy actions for improving the overall level of competitiveness of a state within India.

The State Competiveness Report is beneficial to distinct stakeholder groups namely corporates as well as state governments as well as individual policy researchers/analysts for looking at how competitiveness landscape is shaping up at an all India level. For corporates an important consideration is understanding location options as well as strategizing their bets accordingly. For state governments, the study suggests some policy measures and areas, which have a bearing on overall competitiveness of a state. The broad level strategies that all states can employ to improve competitiveness include focusing on sustainable urbanization, improving sanitation and healthcare facilities, leveraging human resources for educational outcomes, innovation and, improving infrastructure standards and maintaining credit supply amidst demonetization fears.

Delhi secured the top spot replacing Goa in the city-state category this year. Delhi shows strengths in Demand conditions and Context for Strategy and Rivalry for businesses that operate in the region.

Among innovative driven economies, Tamil Nadu has emerged as the most competitive state followed closely by Maharashtra and Gujarat. Among transition economies, Karnataka is number one with Andhra Pradesh as the new entrant in the category. Rajasthan takes the top spot in Investment driven economies with West Bengal in second spot. Among the evolving/changeover economies, Madhya Pradesh is the most competitive followed by Odisha and Jammu and Kashmir. Uttar Pradesh takes top spot the emerging economies ranking followed closely by Bihar.

Commenting on this year’s report and ranking, Dr. Amit Kapoor, Honorary Chairman, Institute for Competitiveness said, “The growth of India has to be studied from the viewpoint of states. The states that have done well on competitiveness tend to do well on ease of doing business as well and going ahead the need is for all stakeholders including policymakers and businesses and civil society is to find solutions that are inclusive and core to the development of India from the ground up. This realization of competitive and cooperative federalism is imperative for making India and its parts and sectors globally competitive.”

States will have to define the agendas for their future growth. This will entail a mix of enabling visions and defining policy choices and empowering business to take a role produce goods and services of good quality at competitive prices. This will help build resilience that will lead to growth, development and prosperity in the years to come.