The Institute for Competitiveness is an international initiative in India which has been doing a study on India since the past 8 years and looks in depth at the competitiveness at a state level in India. The report ranks states on the basis of Prof. Porter’s seminal work in the area of competitiveness titled the ‘The Competitive Advantage of Nations’. Different parameters are first selected and individual indicators (approximately 300) are aggregated to construct a raw dataset for the Index. These are aggregated to form pillars which are the basis of the Index.

The four pillars are the ones which are the pillars of Professor Porter’s diamond framework. Calculations on this raw dataset and aggregation is done to construct the State Competitiveness Index. Post this a ‘stage of development’ is constructed which helps in comparing different states at a similar level of economic development. This is similar to the methodology of WEF’s Global Competitiveness Report, which clubs economies into factor driven, efficiency driven and innovation driven economies. The north eastern states in the competitiveness report in India are put as a distinct block as these economies are similar to the rest of the north eastern economies as well as the fact that the government sees them as a priority grouping. 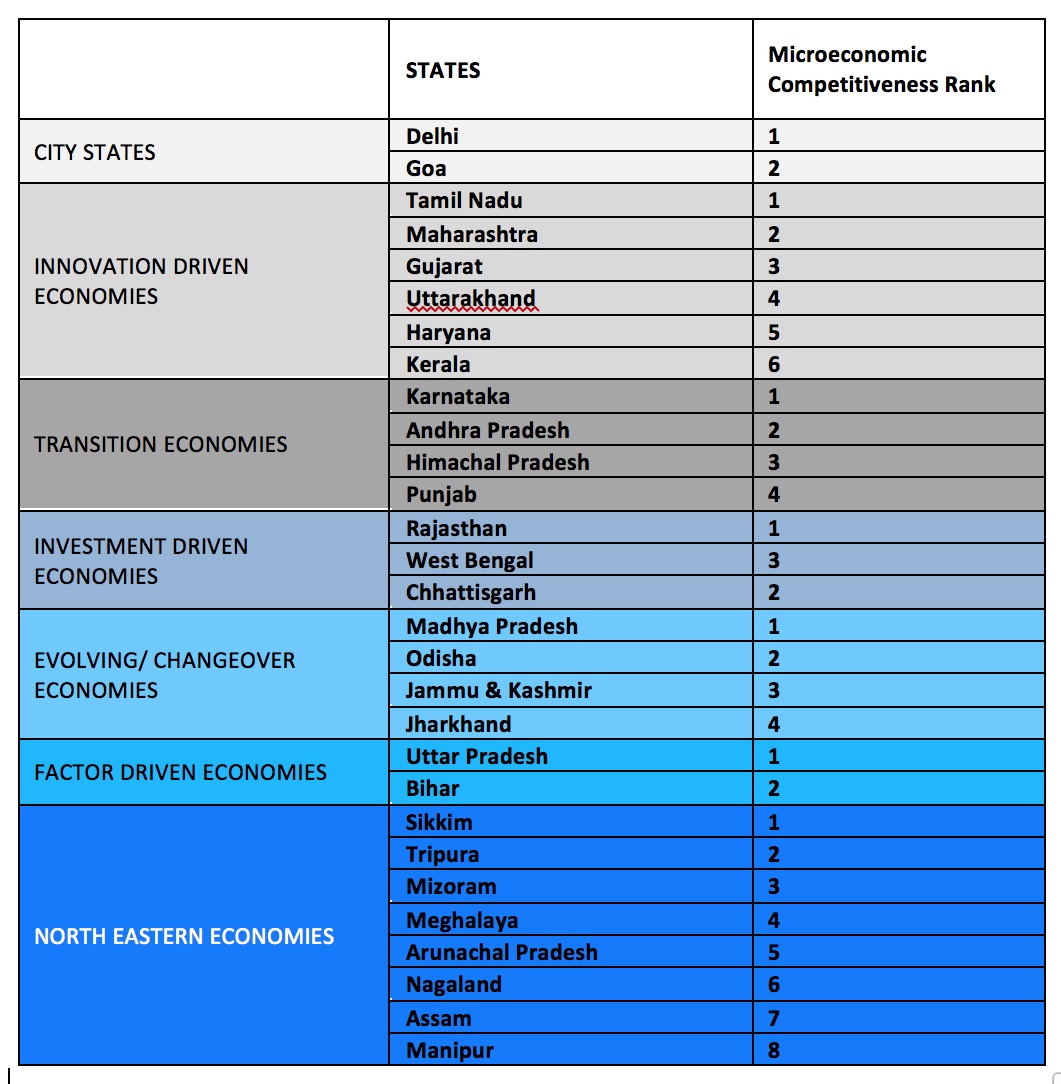 For example Delhi is the best performer in the city states category outclassing Goa this year. Similarly, in the innovation driven economies Tamil Nadu emerges as the top performer outperforming Maharashtra and Gujarat this year. In the transition economies Karnataka retains top slot and Andhra Pradesh comes on at a closer second. In the investment driven economies Rajasthan comes in as the top performer. In the evolving/changeover category Madhya Pradesh emerges as the best performing state. In the factor driven economies Uttar Pradesh emerges as the top state owing to its massive human capital and better demand conditions. The north eastern states is a diverse grouping in economic development terms but Sikkim as a state performs well owing to its better factor conditions, sanitation facilities and other institutional support.

The report also has some insights which are important. First states that tend to perform well on competitiveness are also locations that are good at attracting FDI investments. This does not showcase causation but the fact that FDI inflows and state competitiveness scores are correlated. Similarly urbanisation rates are also seen to be correlated to GSDP per capita of states. Second, the report showcases some sectors where locations are competitive as policy (both at a state and central level) has been conducive to the development of sectors. Some sectors have evolved over time and become globally competitive. These include sectors like automobile and pharmaceutical. While there are some sectors where there has been less overall competitiveness. These include sectors like defence manufacturing and electronics. Third, some important sectors for India to improve overall like healthcare, education, infrastructure and energy are discussed in the report. The report also takes stock of the fact that competitiveness is affected as a type of ‘demonetisation’ has recently happened in the economy where demand is expected to see a downfall in the short term. Thus the challenge before the policymakers is to maintain credit flow and liquidity while maintaining or reducing the GNPA’s which have seen a steady increase over the years due to more stricter guidelines of RBI.

Over the next few years, states must work with each other as well as the Center to ensure that critical legislations like the GST gets implemented. It is indeed heartening to see that post the passing of the GST Act, states have moved fast to pass the legislation in their respective state legislatures. The need is to now resolve the deadlock that is being witnessed in the GST Council. Over the next few years the need of states is to be visionary and look at factors where they can leverage their resources to gain maximum output in terms of not just GDP but also in terms of employment and sustainable competitive advantage.