India is a land of opposites. At one end of the spectrum some of the biggest tycoons thrive on its growing economy and at the other end millions are starving amid widespread poverty and deprivation. India is also home to some 160 million people who are considered middle class. This basic economic structure tells us something about the future of India. As more and more people move to urban areas in search of jobs and better opportunities for their children India’s growing cities face a deep structural challenge to accommodate these people within the city. These people mostly do informal work and this is what has resulted in the rise of the service economy in the country.

India is a conglomeration of 28 different states and 7 union territories that have their own set of unique realities. These states are both varied in terms of their factor endowments (Land, Labor and Capital) as well as their demand conditions (People buying varied goods and services). Key to growth in an emerging economy like India is the role that the governments (through institutions) as well as firms play to create a dynamic and powerful economy. The State Competiveness Report 2012 measures and ranks states in India on various competitiveness dimensions that are critical for the Indian economy. These are the Demand Conditions, Factor Conditions, Context for Strategy and Supporting and Related Industries. These 4 are key elements for the growth and development to be equitable and sustainable.

The states are different both in their relative sizes (Maharashtra is by far the largest economy equivalent to the size of Singapore economy with a GDP of 200 Billion Dollars in 2011) while Goa is just 4 billion Dollars and equivalent to Malawi internationally. Some are growing very fast while others are growing relatively slowly. Apart from the GDP figures the states are also very varied in terms of demographics. Most of the country is very young (Maximum number of people in the 10 – 25 Age bracket), barring the two southern states of Kerala and Tamil Nadu. This is supposedly going to be a great advantage for India in the coming years. But in order to leverage this demographic dividend the states will have formulate specific policies in areas like education, food, energy and healthcare. Due to a large number of people entering the labor force there will be a large consumer class that will get created and this is a big area of opportunity for both the domestic and the international companies. Huge amount of infrastructure spending roughly of the order of 1 trillion dollars is expected in the in the 12th plan. The government alone is not capable enough to finance this. Public private partnerships (PPP) will be the model for dealing with the infrastructure deficit that the country presently faces.

The report specifically refrains from making cross category comparisons since it defeats the very purpose of categorization. This categorization is helpful to assess competitiveness relative to states with a similar level of per capita GDP, which broadly is a measure of prosperity and level of economic development of the economy. 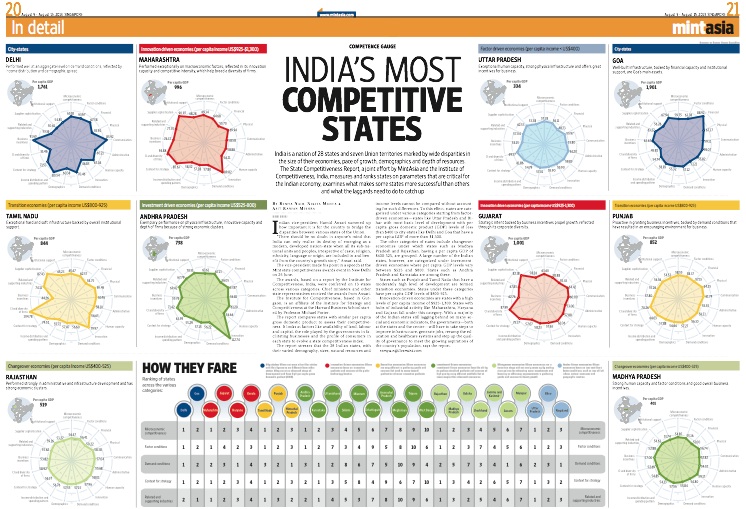