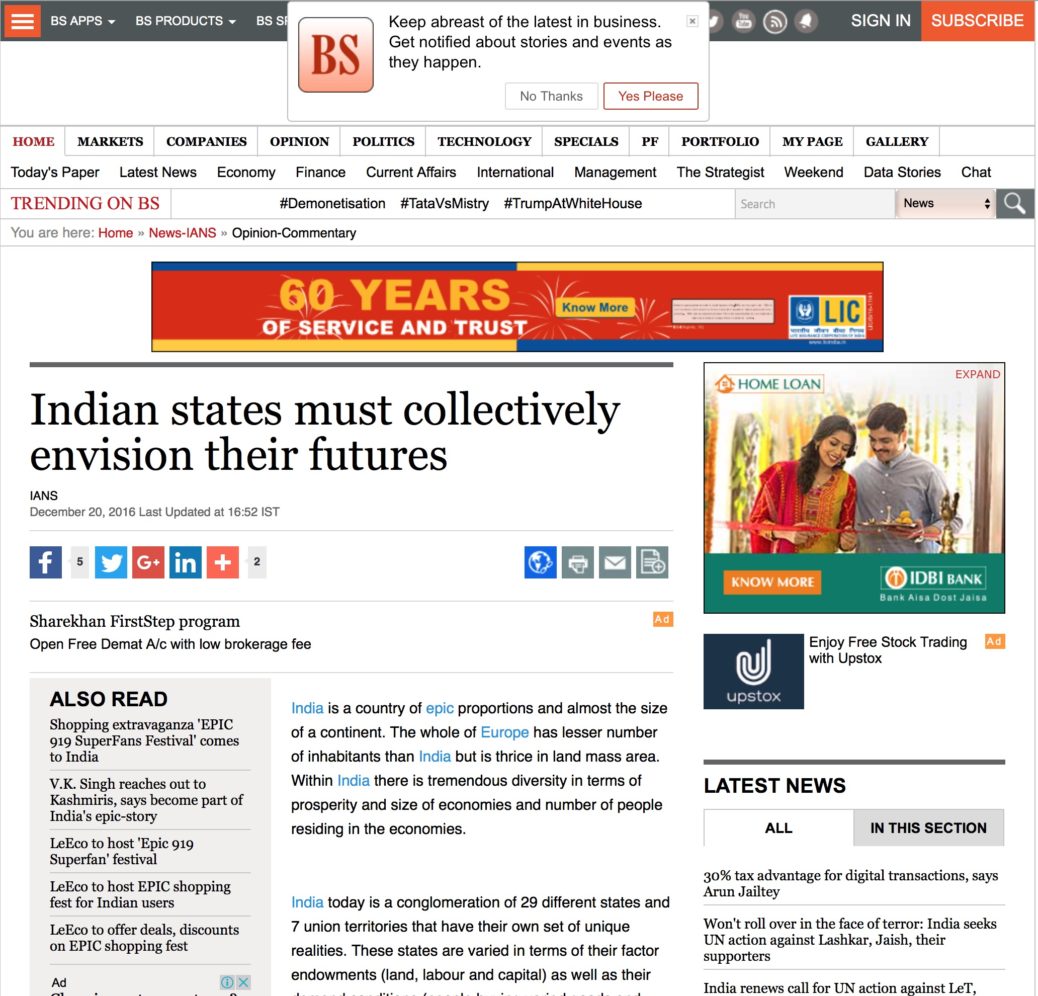 India is a country of epic proportions and almost the size of a continent. The whole of Europe has lesser number of inhabitants than India but is thrice in land mass area. Within India there is tremendous diversity in terms of prosperity and size of economies and number of people residing in the economies.

India today is a conglomeration of 29 different states and 7 union territories that have their own set of unique realities. These states are varied in terms of their factor endowments (land, labour and capital) as well as their demand conditions (people buying varied goods and services). The key to growth in an emerging economy like India is how the institutions, government, companies as well as citizens play a proactive role in building a competitive economy.

The states are different both in their relative sizes, growth rates and GDP, as well as their demographics. Perhaps it is wise to no longer call India the lumbering Indian elephant but rather animals of different size and nature that are moving ahead differently.

The ICR 2016 measures and ranks states in India on various different competitiveness dimensions that can be seen as the basis of competitive advantage and long-run economic growth. These are the Demand Conditions, Factor Conditions, Context for Strategy and Supporting and Related Industries. Indian states fare poorly when compared with their counterparts abroad but a comparison in India reveals an interesting story.

In the evolving/changeover category, Madhya Pradesh emerges as the best performing state. In the factor driven economies Uttar Pradesh emerges as the top state owing to its massive human capital and better demand conditions. The north eastern states is a diverse grouping in economic development terms but Sikkim as a state performs well owing to its better factor conditions, sanitation facilities and other institutional support.

First, states that tend to perform well on competitiveness are also locations that are good at attracting FDI. This does not showcase causation but the fact that FDI inflows and state competitiveness scores seem correlated. Similarly urbanisation rates are also seen to be correlated to GSDP per capita of states. This is possibly due to agglomeration effects of cities.

Second, the report showcases some important sectors and locations that have been conducive to development of sectors. There is a distinct correlation between innovation at the state level and competitiveness at a state level. These states also tend to perfom well on industrial development. Sectors like automobile, pharmaceutical and IT are globally competitive in India and states which tend to foster these like Tamil Nadu, Maharashtra, Gujarat and Karnataka (specifically for IT) perform well on competitiveness ranking of states.

Third, considerable progress is being made in healthcare, education, infrastructure and energy but much more needs to be done both from the center and the states in India. For example even if the centre is going ahead with electrification of villages the states have to ensure that electricity is provided as generation and transmission is with the union governement while distribution is a state responsibility as per the Indian constitution.

Similarly, another major challenge before the policymakers is maintaining credit flow and liquidity (especially amidst demonetization now) while maintaining or reducing the GNPAs, which have seen a steady increase over the years due to stricter RBI guidelines of RBI. This can be done only with the acitve support of the banking system, much of which is decentralized.

Over the next few years, states in India must take a leadership role and work with each other as well as the center and the broader world to ensure that critical legislation like the GST get implemented as well as they are able attract capital. It is heartening to see the progress being made in moving towards GST’s implementation. Policymakers at all levels and corporates operational in Indian states must envision their futures collectively to truly make states attain their potential and enhance prosperity for all Indians.

Published with Business Standard on December 20, 2016.